If you have spent an extended period of time traveling for work then you probably know the damage not having a place of your own does to you over time. An acclaimed Hollywood cinematographer named J. Roy Hunt had a similar issue. His chosen profession kept him away from home for weeks at a time. Over the years J. Roy Hunt decided to bring his home along with him during these travels. He ended up with several “Hunt Cars”, his first being built in 1935 and the last in 1945. Perhaps one of the most notorious is the Hunt House Car from 1937. 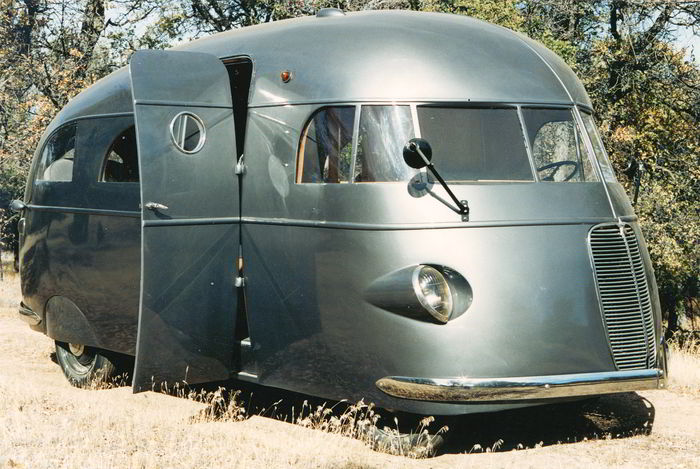 The Hunt house car from 1937 used a 1937 Ford truck chassis. J. Roy Hunt was able to use aircraft engineering to build the streamlined body you see in the photos. He had a auto-body shop help him with the fabrication. Hunt built almost 50 of them over the next decade, making it one of the rarest production motorhomes in existence and considered by many to be the first with a working shower. It also featured a disappearing toilet that folds into the wall so the shower has additional space (see it in the video below).

Watch the video below for more about the design, restoration and history of the 1937 Hunt House Car. It is 9 minutes long but does offer additional views and details of the interior.

Currently, the 1937 Hunt House Care is housed at the RV/MH Museum and Hall of Fame in Indiana. If you make it to the museum you will find dozens and dozens of other unique examples of RV’s and motorhomes. Certainly worth dropping by if you are in the vicinity.

What are your thoughts on the Hunt House Car? Share with us in the comments below!