For no experience and an initial investment that is well under a year’s rent in most locations in the US, an enterprising young person, with some help from friends, can have an amazing mobile home that can serve as vacation platform, or semi-permanent living quarters.

School buses are a great way to start and that’s what this story is about.

The residents and their 2000 International 60-seat school bus.

Taylor and Tyler started with a 60 seat International school bus, built in 2000. It had 98,000 original miles on the diesel engine, which is barely getting it warmed up good for these big bad boys.

The two picked it up from an online auction, where the planned budget for the vehicle was around $3,000, but they got this one for $2,125.

In this shot, you can see the layers of the interior, spray foam, foil, and paneling. 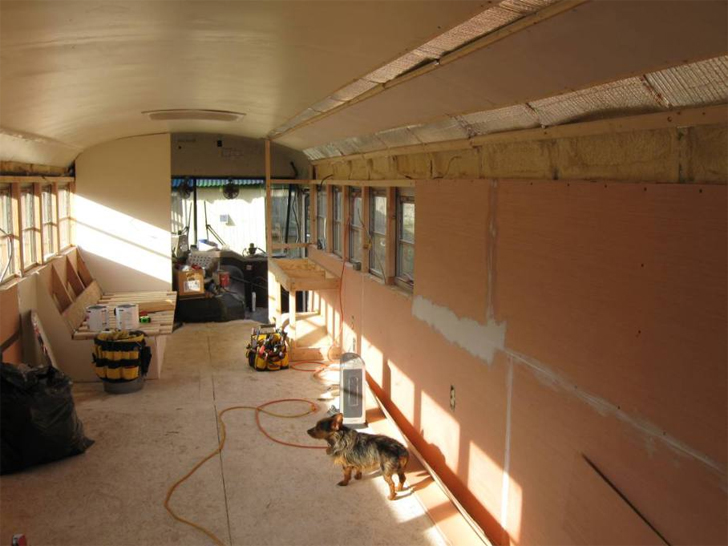 A school bus driver agreed to give them a quick tutorial on how to navigate the beast and the new owner drove it home from the auction.

Then began the crowdsourcing for the renovation labor.

If you have a lot of friends or family, you can do these things fairly cheap, because people do think it’s cool and wish they had thought of it. All kinds of skills come out of the woodwork, or sheet metal in this case. 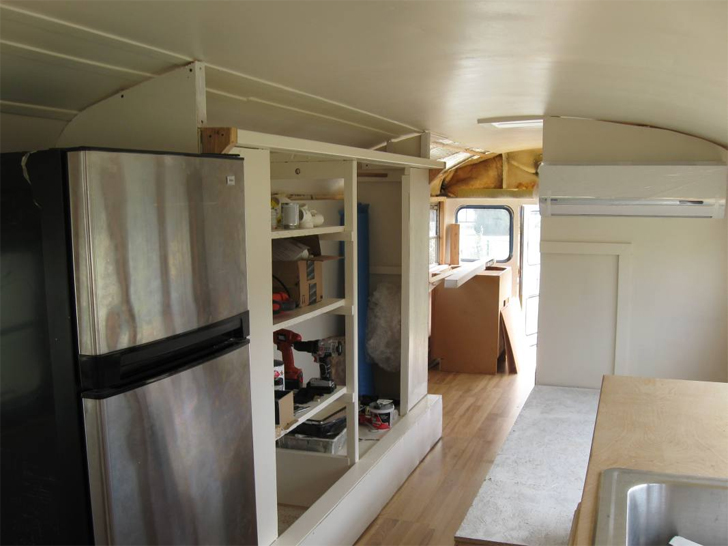 The finished closet with sliding “barn doors” to save space. 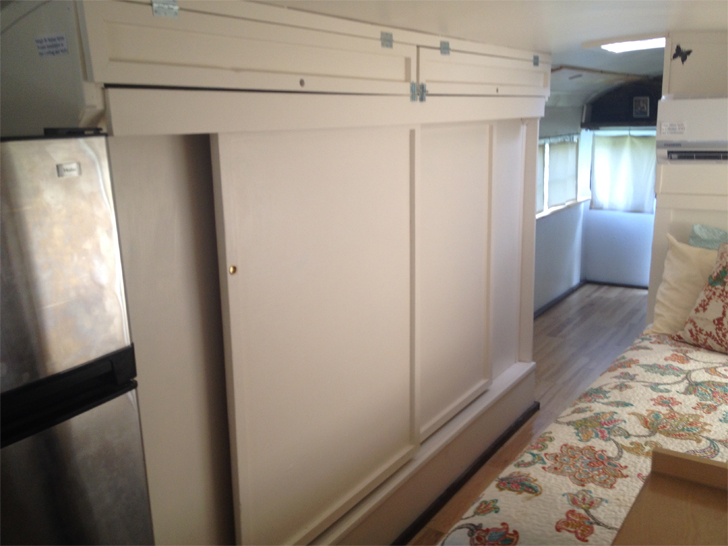 It may not seem like a big project, but one factor that many bus renovators mention as being a chore is seat removal! I’ve never done bus seats, but I  did once reclaim about 200 movie theater chairs at an auction, and that was a beast of a job getting them unbolted and moved.

A view from the front, bath behind the wall, bed on the right in the rear. 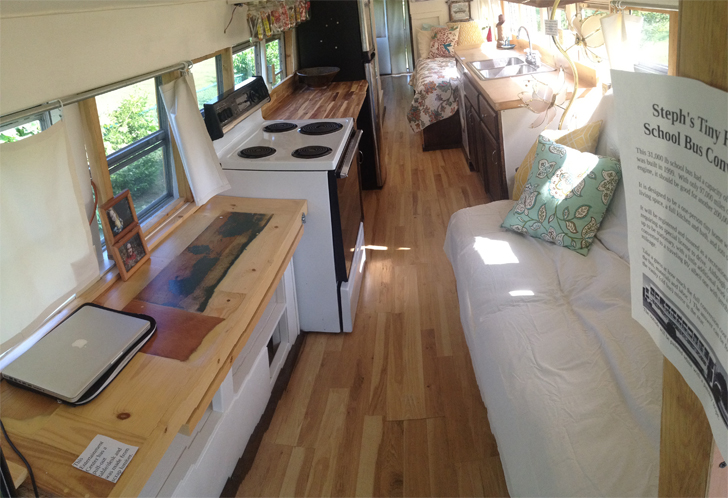 The bus was then completely gutted. This serves a couple of purposes. First, it gets all the junk out of the way for the new stuff, but it can also reveal problems, like rust which they found, but were able to treat.

Just because your bus looks watertight doesn’t mean there’s not a problem with the insulation and paneling. Better to find out before you put all your custom work in and have it ruined.

If you can afford the space, full-sized appliances make it more livable. 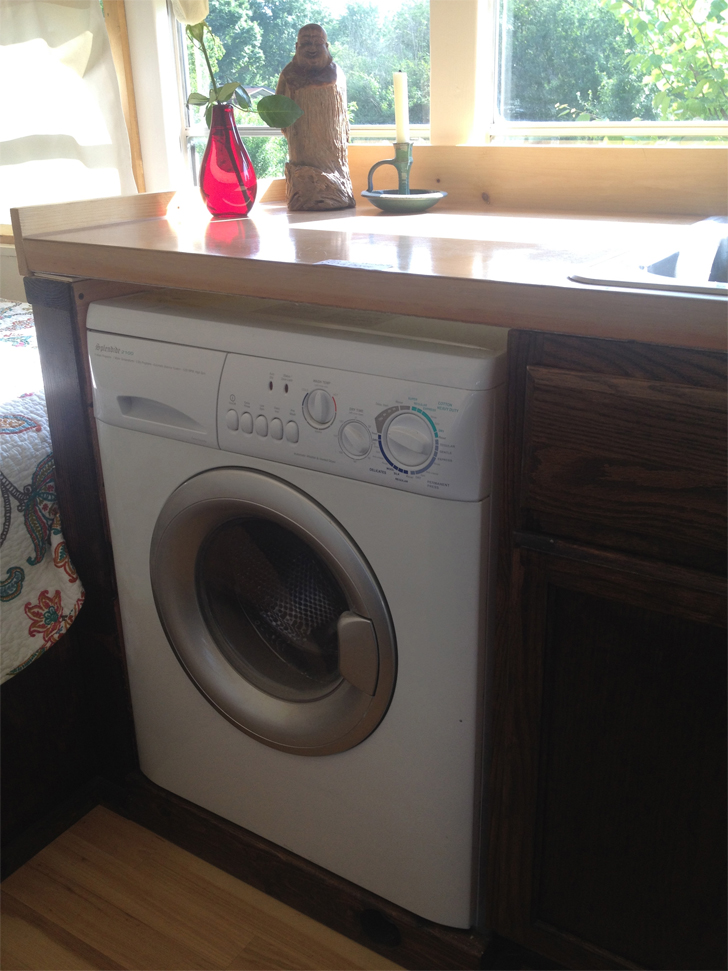 Spray foam insulation was added to the hollow metal shell and many of the materials were purchased through salvage and second-hand suppliers to keep the cost down.

You may be able to find donations as well if you make it known what you’re doing. They also added a reflective foil barrier insulation to the inside to further reduce noise and seal the bus.

A view to the front of the bus, with a futon that doubles as a sofa and bed. 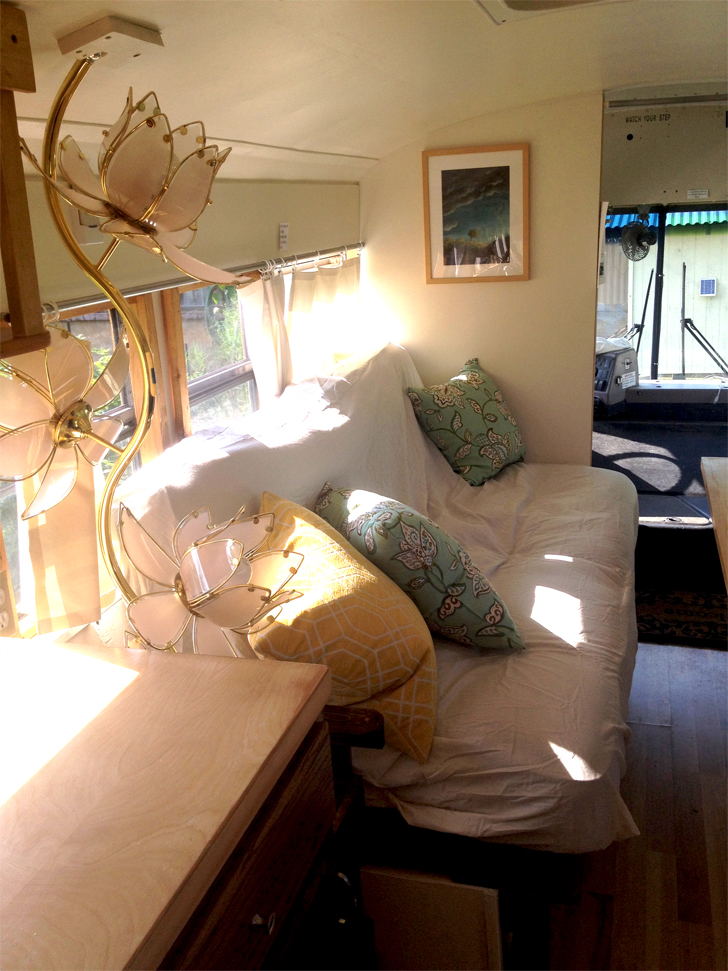 The finished interior is gorgeous, with Lauan-paneled walls and a beadboard ceiling. The salvaged laminate flooring gives a shabby chic apartment feel to the whole space and lots of custom touches throughout make this bus feel like you could spend extended time here and be comfortable. 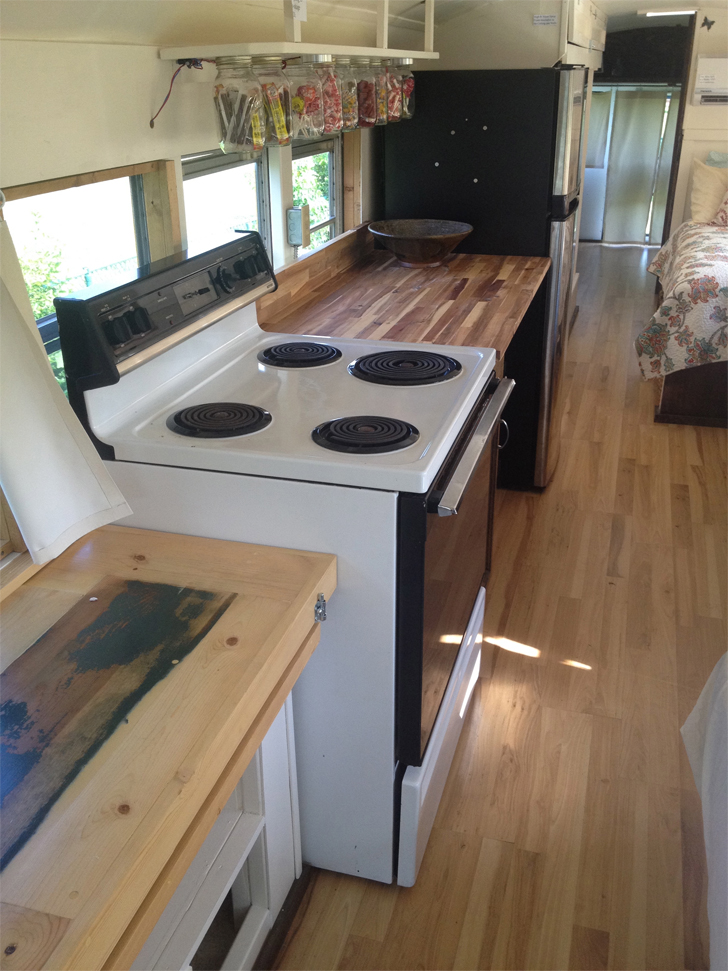 A large area at the rear of the bus was left unfinished in the initial build, but as a roommate joined the party, more space was needed, so shelves were added to turn that unused space into a nice closet. The luggage bins underneath the bus were also used to store large plastic containers for infrequently used items.

Buses are notoriously narrow, so to make the most of the available space, they went up as high as possible in several places to provide more storage. The bus is equipped with a shower and RV toilet, as well as a full-sized kitchen sink.

The bed was left in the main living space to create as open a layout as possible, and one nice touch is that they managed to incorporate a washing machine, essential for long-term stays.

For more about their bus, see this post.  You may also like This School Bus Conversion With An Off-Grid AC