Skip to content
Table of Contents show
Mike and Shannan travel around the National Parks in their converted cargo van.
The Chevy van used to be Mike’s work vehicle.
Mike’s YouTube videos feature the custom work he did on the van. Take a tour with him.
Two sofas in the back turn into a large bed at night.
The van can also carry the couple’s bikes and kayaks.
Share this post:

Mike and Shannan of the blog, Backroads Vanner, not only explore the backroads of America with their two dogs, but they also celebrate our nation’s treasured National Parks with their beautiful photography…all from inside a cargo van turned camper van.

Mike and Shannan travel around the National Parks in their converted cargo van. 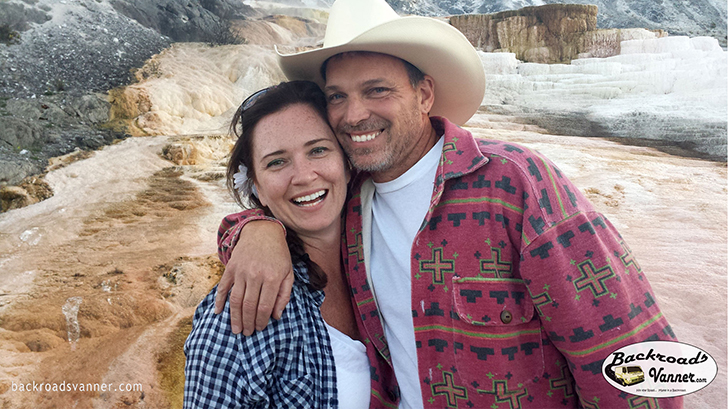 The couple decided to simplify their lives, downsize and turn Mike’s work vehicle, a 2003 Chevy Cargo Van, into their home on the road. Known as “The Practical Vanner” because of his useful and practical applications for the van, Mike now has everything from a custom canopy system to a mobile office, all within a tidy package that can still maneuver mountain roads.

The Chevy van used to be Mike’s work vehicle. 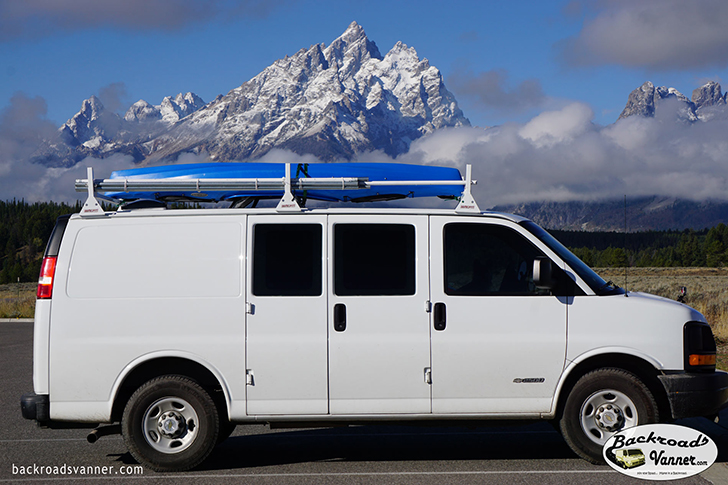 Mike first removed all the cargo van’s shelves and lined the walls with sheets of rigid foam insulation and Reflectix insulating wrap. He then covered the walls with 4×8 sheets of luan, soft foam and then vinyl. You can see how he did this in a video on their YouTube channel. Mike also shares tips on how to DIY your own van walls.

Mike’s YouTube videos feature the custom work he did on the van. Take a tour with him.

Mike then built a closet, cabinets, drawers and two sofas with storage underneath. The sofas can accommodate a center table for eating, working or playing games. The board slides into the center and the couch cushions then become the bed — with a nightstand.

Two sofas in the back turn into a large bed at night. 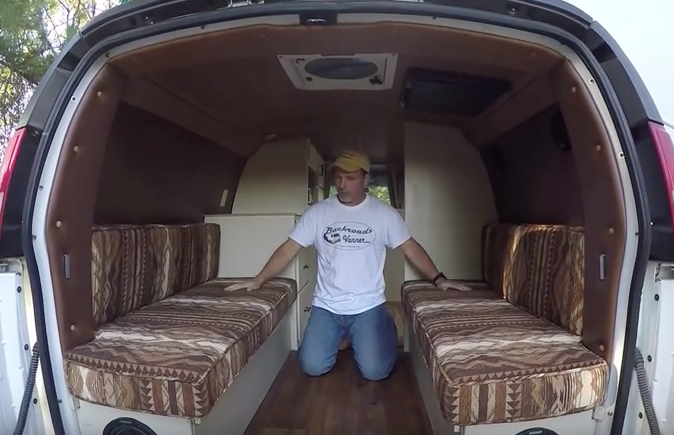 This mobile office also has its fair share of electronic gadgets including a 12 volt TV and DVD player, a rearview camera, a Fan-Tastic Fan vent and electrical plugs that connect to a 12 volt deep cycle battery and a 1,500 watt power inverter. The couple use a Goal Zero Boulder 30 Solar Panel, a Goal Zero Nomad 20 Solar Panel and a Goal Zero Yeti 400 solar power generator.

The van can also carry the couple’s bikes and kayaks. 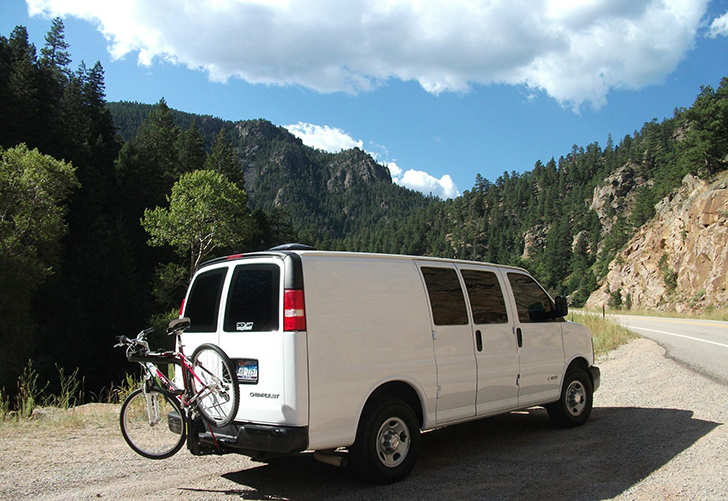 Along with custom bug screens, the van also has a custom canopy awning made from a rack that held Mike’s former work ladder. The canopy provides shade over the entire van and the rack holds kayaks and other equipment.

During a massive windstorm at a music festival in Arkansas, Mike’s canopy was the only one standing amid the detritus of other camper canopies. Both the bug screens and canopy DIY projects can be seen on the couple’s YouTube channel.

Photos and video by Backroads Vanner