Skip to content
Table of Contents show
This 1995 Carpenter school bus is about to get a makeover.
The previous owner had stripped out the seats and started the renovation.
The floor was covered in rigid foam insulation and lumber battens were bolted in.
A subfloor of heavy plywood went down next.
Here you can see the skeleton developing.
The electrical system gets wired before wall panels go up.
For ease of installation, the kitchen was moved to one side.
The components of a plumbing system don’t look like much work before….
Bunks mostly finished, looking toward the rear.
Bunks, finished and ready for slumber.
Time to get rid of the red paint.
The primered bus, ready for the derby – but looking like a prison transport!
The inside got the spray treatment for a smooth finish.
Here it is with skin on the “bones” and almost finished.
Here’s what a case of beer will buy at the University of Notre Dame, free welding!
Here is the finished bus, facing the rear.
Small closet bath with a composting toilet.
The large sofa converts for more bed space.
Each bunk has lift up storage under the mattress.
Share this post:

What do you get when you combine eight recent college grads, a desire to see the US from the road and a beat up “Skoolie”? Well, whatever it is, they call it SerendipitBus and under that name the group shared their bus renovation adventure with the imgur community.

This 1995 Carpenter school bus is about to get a makeover.

The previous owner had stripped out the seats and started the renovation.

The group began the project in 2014, as all were beginning a master’s entrepreneurship program. The bus: a 40 foot 1995 Carpenter. The team: One experienced builder, seven total beginners. They come from two countries, and four different US states ranging from Wisconsin to Texas, but they all shared a single goal; ROADTRIP!

The floor was covered in rigid foam insulation and lumber battens were bolted in.

Over the course of seven months, in between work and study, they set out to transform the old school bus into a luxury RV.

A subfloor of heavy plywood went down next.

Mike, the original owner, had dreams of travelling himself in the old bus and had already stripped out the seats and added the minimum features required to get the bus title re-designated as an RV.

Here you can see the skeleton developing.

They started with a pretty solid floor plan that morphed only a little through the process. It didn’t take them long to discover a couple of challenges they needed to address. The construction started with rigid foam insulation and wooden runners the length of the floor to cut down on road noise and heat, and to provide a solid, bolted-in foundation for what was to come.

The electrical system gets wired before wall panels go up.

A heavy plywood subfloor was next and something that all bus converters should consider: insulated boxes over the wheel wells, a huge source of travel sound.

For ease of installation, the kitchen was moved to one side.

Lumber framing provided a skeleton for everything else. In the process, the team realized that putting the kitchen all on one side of the bus, instead of the “galley” version they had first envisioned, would keep electrical and water in one place for easy hookup on the driver’s side.

The components of a plumbing system don’t look like much work before….

The inexperienced plumbers had some “fireball” incidents in their attempts to deliver LP gas for appliances. This led to the decision to go with an all electric kitchen; a choice that limits long term camp sites, but ultimately increased safety.

Their decision-making process was well informed and electrical went in before walls and other panels, making running the wires a simple matter. They used what looks like household Romex, an excellent choice for delivering large loads over a 40 foot distance.

Bunks, finished and ready for slumber.

While the bunks were spartan in design, the group made a huge concession for comfort. Rather than standard “twin” sized bunks, they built them half the size of a queen mattress and ordered memory foam which they cut in half with a handsaw to outfit the 8, double decker bunks.

Time to get rid of the red paint.

With most of the paneling in place and their first trip deadline approaching, the group decided to make some investment in the look of the project.

The primered bus, ready for the derby – but looking like a prison transport!

Next up, the exterior. Mike had needed to pain over the school bus yellow, which is illegal on RVs in most states. The paint job that resulted was quick and messy and the group decided sanding it down was the way to go. They first took the red down to the original yellow.

The inside got the spray treatment for a smooth finish.

They slapped on two coats of white primer, a vast improvement, even if they did look like prisoners debarking when they arrived at their first test destination, the Kentucky Derby.

Here it is with skin on the “bones” and almost finished.

Since any tools required meant expenditure, the group worked without ladders, saw horses or scaffolding. But, they put their apartment’s rolling dumpster to good use as a sawhorse and scaffold.

Here’s what a case of beer will buy at the University of Notre Dame, free welding!

After the derby, they tackled the roof deck, which required a lot of skilled metal work. No problem, these resourceful students managed to buy an entire team of welders for a case of beer! Ah, youth!

Here is the finished bus, facing the rear.

Their “hardwood” flooring choice needed to be rugged and able to survive the motion of the bus, so vinyl was chosen. Several companies now make a heavy grade, water proof vinyl “wood look” snap together plank. They look great, are inexpensive, easy to install and rugged.

We have mentioned this before, but in renovation it’s important to know where to DIY to save money and when an expert is best called in. The team decided that quality trumped expense when it came to seating and hired a company to manufacture the foam block cushions they needed.

Not all “expert” help has to be expensive though, as a team member’s mom pitched in to sew covers for the cushions.

Unless you plan to camp where facilities are always readily available, plumbing will be a consideration in any bus reno. In the case of SerendipitiBus, they added two sinks.

Each bunk has lift up storage under the mattress.

We tend to be less adventurous when it comes to asking others for help as we age, but this group was not shy. They managed to get a sponsorship from McDonald’s of all places. In addition to a grant, the team ate for free at McDonald’s all along the way!

In the end, the results are surprisingly sophisticated for a team of young, inexperienced builders. They went with a limited palette of most neutral colors for a cool effect. 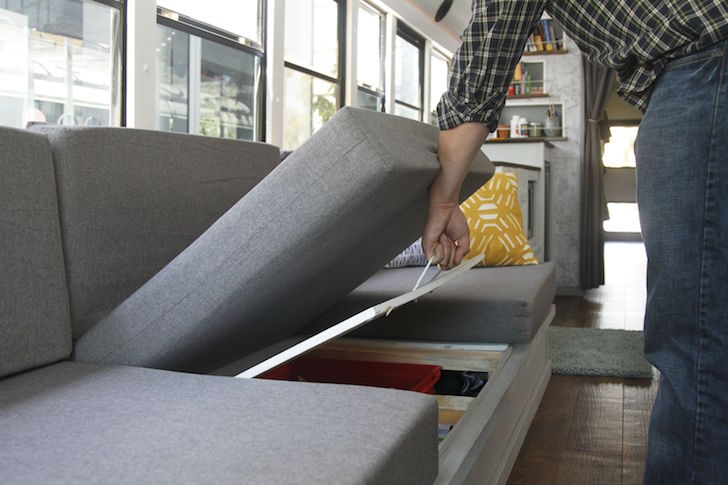 The base of the color scheme is a white paint job, with shades of grays and tans, and lots of natural wood finishes, with a few pops of color here and there. 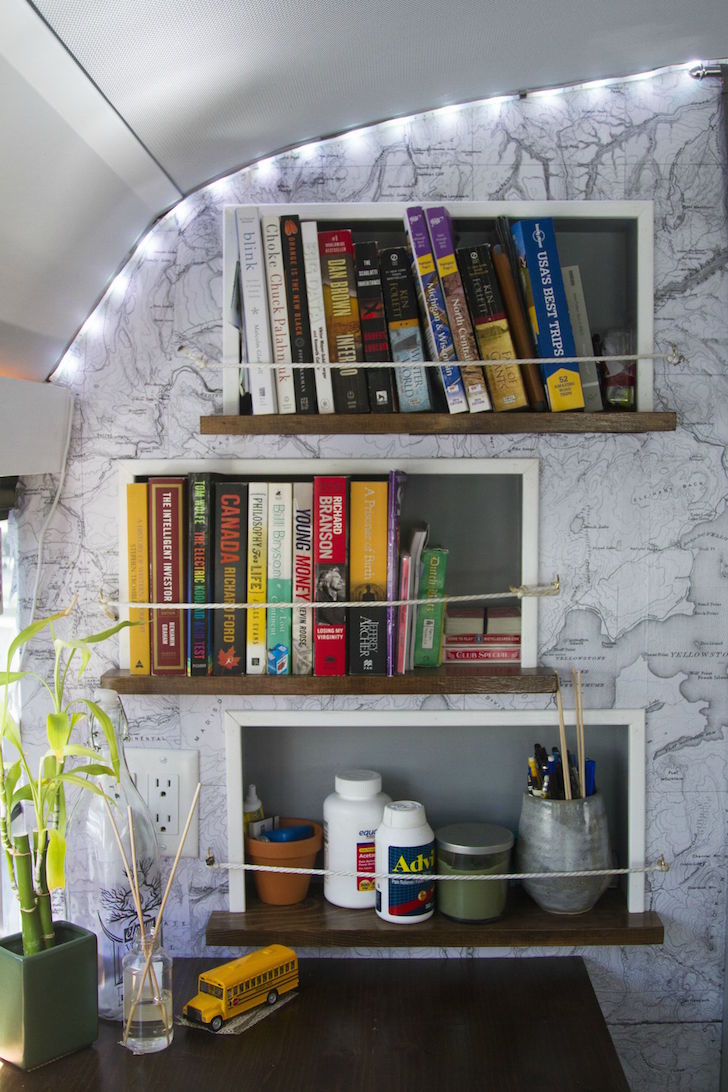 Storage, a constant struggle for RVers everywhere, is ample thanks to lift up seats on the 21 feet of sofa. And, each bunk has a lift up plywood deck under the mattress, revealing large storage compartments. In addition to the 8 traditional “beds” the sofa, on both sides of the buses aisle, can be converted into a giant cushioned surface that looks like it could sleep another 6 people, or more. 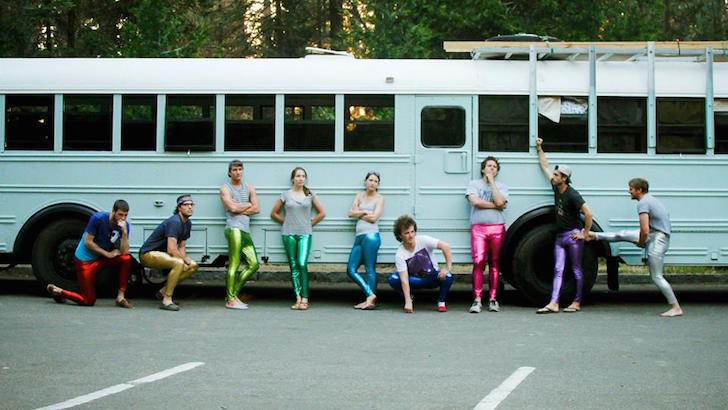 All in all, this group enjoyed their project, was able to do almost all of the work themselves, and came out with a product that they could be proud of. We say two thumbs up to the SerendipitiBus team and if any of you are still looking for jobs, send us resumes, we all know people who need good, capable help!