Before we spent a winter in the Southwest, we had no idea what to expect. Now we want to share what we've learned from experience.

This is my third winter living full-time with my husband in our RV. Like most full-timers, we choose to spend the colder months in a warm climate. For the first two years, that meant wintering in the Desert Southwest.

As native New Englanders, we didn’t have experience living in this part of the United States. 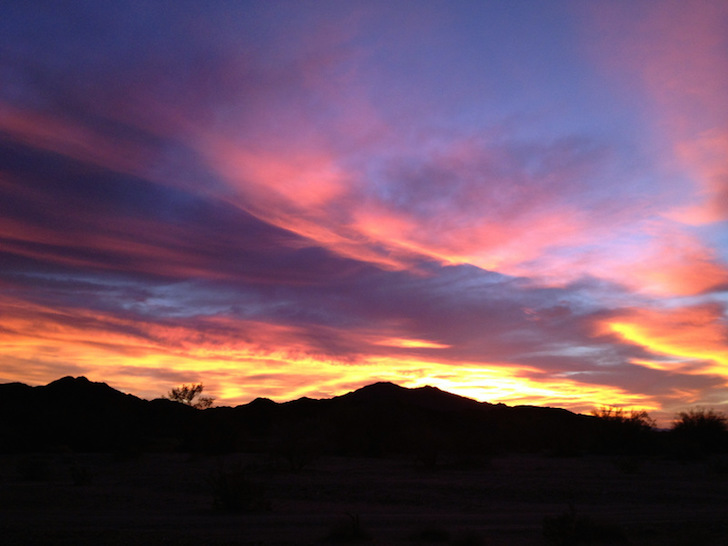 Our expectations included blowing sand and scorching temperatures. We also thought of all the rattlesnakes and giant scorpions that would surely be around every corner.

Thankfully, those expectations turned out to be mostly wrong (well…there was that one rattlesnake). Instead, we found a comfortable climate, perfect for our RVing adventures.

Since our first winter there, we’ve learned a lot about RVing in the desert. Here are the top five most surprising things we figured out along the way.

This might not come as a surprise to some people, but when you grow up in the Northeast, your idea of the desert is usually a flat, barren wasteland filled with nothing but sand and dust.

That assumption is just plain wrong. Yes, there are some desolate, flat stretches of desert. But there are also rocky mountains, rolling hills, amazing rock formations, and wild looking cracks in the Earth. 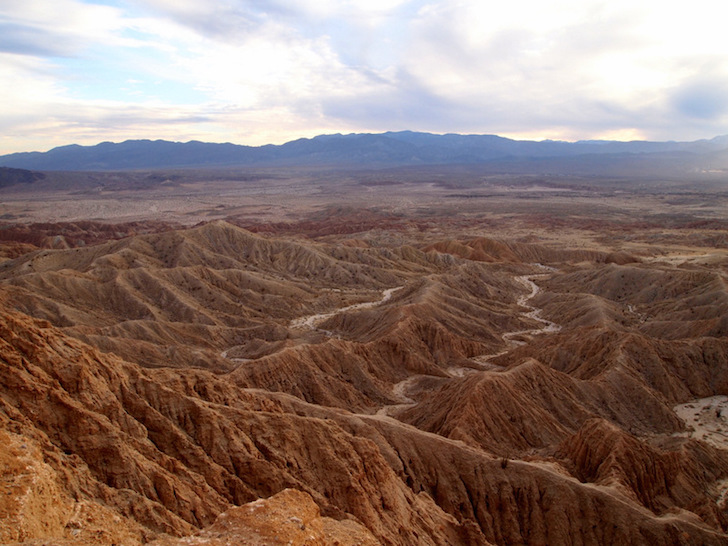 The Badlands in Anza Borrego State Park – not so flat. Photo by Amanda Watson

These are just a few of the not-so-flat places we loved:

While the desert is many things, it’s definitely not all flat.

The winter desert can be chilly, particularly at higher elevations. Even on the warmest days, once the sun dips below the horizon, temperatures plummet.

An 80-degree day can easily turn into a 40-degree night. 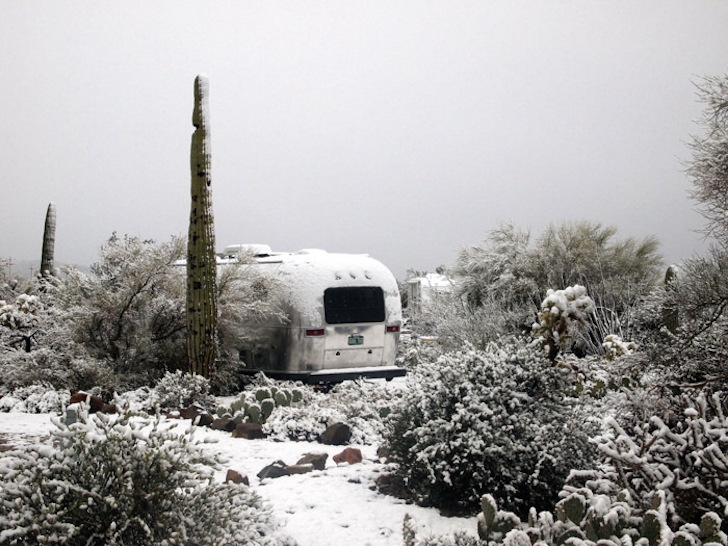 This can happen even in the desert. Photo by Amanda Watson

While camped in the desert of Southern California one year, we had a stretch of cold temperatures that went well below freezing—down into the 20s. Luckily, we were boondocking at the time and had no outgoing hoses that could have frozen.

We simply cranked up the furnace, snuggled under some blankets, and waited for the sun’s warming rays to reappear.

Not only is the desert not flat, but it’s not barren. A large portion of Southern California and Arizona is covered by the Sonoran Desert. This diverse and lush (yes, I just used the word lush to describe the desert) landscape is a bona fide jungle of cacti, shrubs, grasses, and trees.

From spiky and pointy to flat and smooth, you can find it all in the Sonoran Desert. 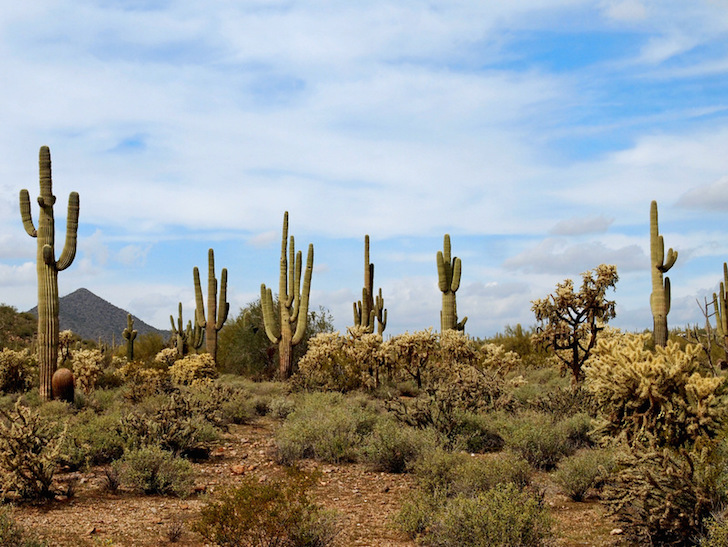 The Desert Southwest might not be dense with foliage like other parts of the country, but the vegetation that it does have is unique and adds an extra layer of interest to an already fascinating landscape.

4. Cheap living at its finest

If you’re looking for cheap camping, the Southwest United States will deliver. You can choose to stay at $50+ per night luxury RV resorts and spend a fortune on camping fees, or you can stick to the middle of the road and use public campgrounds that charge closer to $25 per night.

Another option is to seek out free camping on National Forest and BLM (Bureau of Land Management) land. 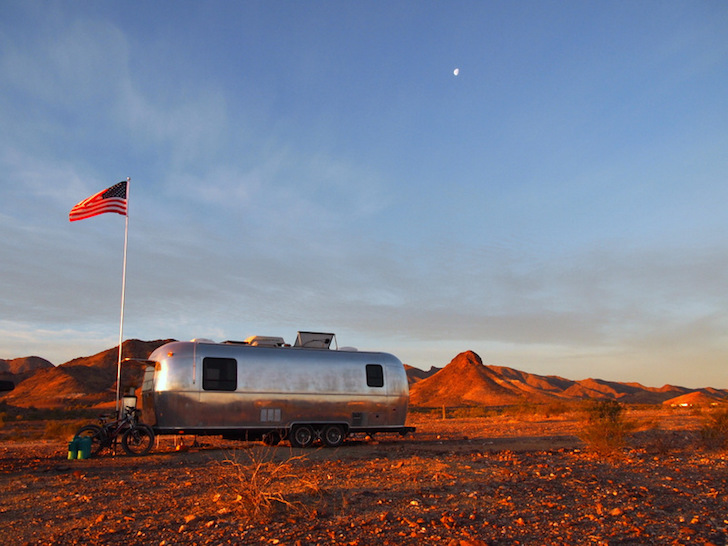 After RVing in many areas of the country, I can say with confidence that if you want to go the cheap route, the Southwestern United States has the most options. One winter, we spent nearly two months RVing in different BLM areas around Southern California and Arizona…our total camping fees for the entire time was zero dollars!

We basked in the sun near Yuma, California, parked among the giant Saguaros in Ajo, Arizona, and spent a week enjoying solitude in the Las Cienegas National Grasslands in Southern Arizona.

It’s not for everyone, but if you’re willing to give up a few luxuries, free camping in the Southwest part of the US is easy to find and highly rewarding.

5. It’s easy to socialize with other travelers

In the winter months, RVers tend to gather where it’s warm. For most people, that means either Florida or the Southwest. Because there are so many RVers in these areas, you’ll have plenty of opportunities to socialize with fellow travelers. 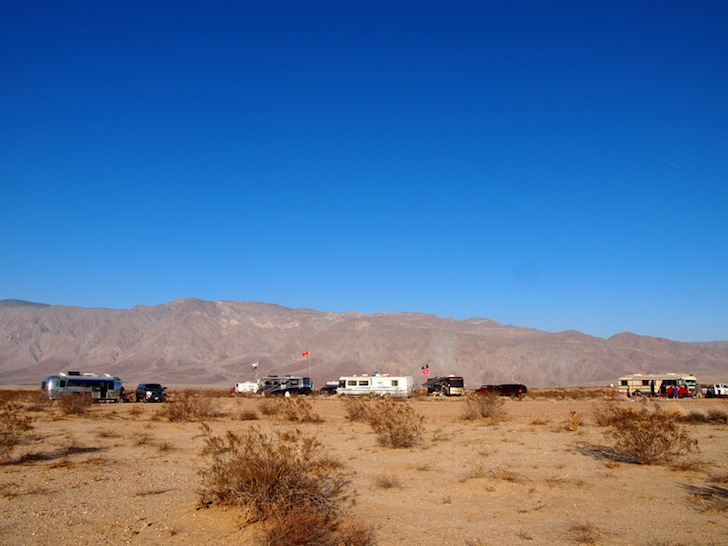 Social time in the desert. Photo by Amanda Watson

Our first year in the Southwest we spent a month spontaneously caravanning with two other RVs around Southern Arizona. The second year we joined a group of roughly 15 RVs in Southern California and spent nearly the entire month of January together.

We moved to Quartzite, Arizona to check out the largest gathering of RVs in the country. It felt like everywhere we went—from Phoenix to Santa Fe—we met some RVers who invited us over for happy hour or a potluck dinner.

We love the social aspect of RVing. We love meeting new people and hearing their stories. We love “talking shop” about solar panels and grey water tanks. We love the instant camaraderie and forging of lifelong friendships.

While it’s certainly true that you can meet RVers all over the country, the Desert Southwest remains our favorite place to socialize with others.

From the varied landscape to the abundance of free public lands, the Southwestern part of the United States has surprised us in more ways than one. This area quickly rose to the top of our favorite places to go RVing. Whether you are full-time, part-time, or just dreaming about RV travel, I can’t think of a better place to spend your winter.

See also: 8 Southwest Towns You Need To Visit This Winter