Slim Potatohead is based in Alberta, Canada, but his camping trips have taken him all over the American West in an effort to escape Canadian winters and enjoy boondocking spots in the desert and mountains.

Slim documents his travels on his YouTube channel. He not only features some excellent footage of places like the Grand Canyon and Joshua Tree, but he has a very helpful series of videos on his Aliner trailer modifications and repairs.

An Aliner is a lightweight popup travel trailer that tows with a low profile, but its walls lever up to create a tipi-like structure with tons of headroom. Typically they contain two beds (one that converts into a dinette), a kitchen, and sometimes a small bathroom. Slim chose his Aliner for its space-saving qualities, low profile, and adaptability.

“I’d been camping since I was a child. Mostly backpacking in with everything on my back. I had been dead set against being an “RVer” for along time. I equated it with those big RVs that I get stuck behind on mountain roads or take up several spaces at a campground,” he says. “But when I found there was a little trailer that folded up and didn’t take a lot of space, my mindset changed. I was looking for something more secure than a tent, something that could be removed when I just want to use my Jeep. The A-frame was the perfect match, and I got it at an amazing price.”

You don’t need to own an Aliner to benefit from Slim’s simple and smart mod ideas. In fact, many of his ideas translate over to any type of RV.

Slim covers a variety of topics from installing solar panels and waterproofing RV windows with epoxy to making cabinet knobs out of pine cones. He even built a collapsible shower/potty area under a bench seat with PVC pipe, bungee cords, and broom handle clips.

Modifying his little trailer not only makes it more of a home while on the road, but has given him a dedicated DIY following. Especially among camping fans who don’t want to spend a lot of money on modifications and don’t own many tools.

“I claim no special skills or qualifications,” Slim says. “I do this because I enjoy it. I like to explore and I like to experiment. My videos are about my ideas and stories, not about me. I like it that way.”

Some of his most popular videos are his Low-Cost Ideas for an Aliner series. Each videos covers “I should have thought of that” ideas that can benefit any type of RV or camping trailer. A few of the best ones include the following: 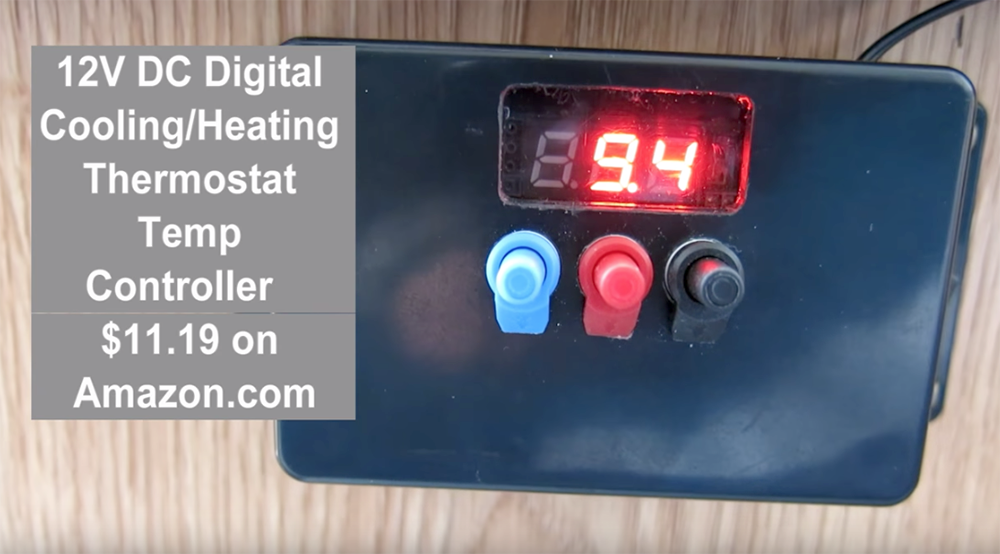 Slim’s original Aliner thermostat wasn’t in a convenient location and didn’t have a good temperature range. Slim installed an inexpensive 12V digital thermostat temperature controller from Amazon by his bedside for easier access. The controller can be pre-set to turn the heater on or off depending on the inside temps. 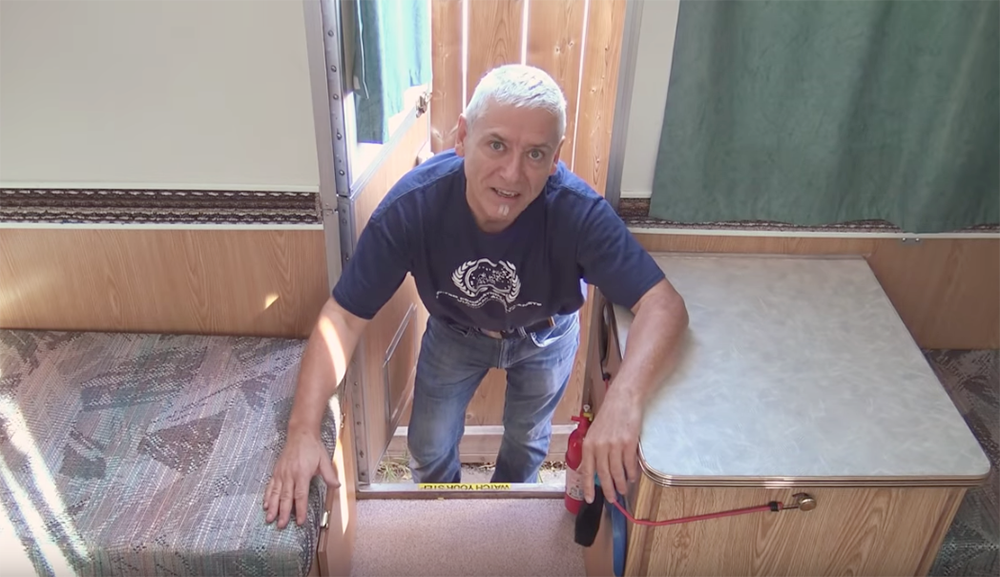 Slim’s Aliner had a lip on the floor that met the bottom of the front door. The lip not only trapped dirt and debris, but it was also sharp and painful if he kneeled on it.

He removed the metal lip with a nibbler tool, tin snips and filed it down. He used some 5-Minute Epoxy to create a watertight seal. He also added a piece of aluminum with rivets outside the door for additional water protection.

Insulating the floor with play mats 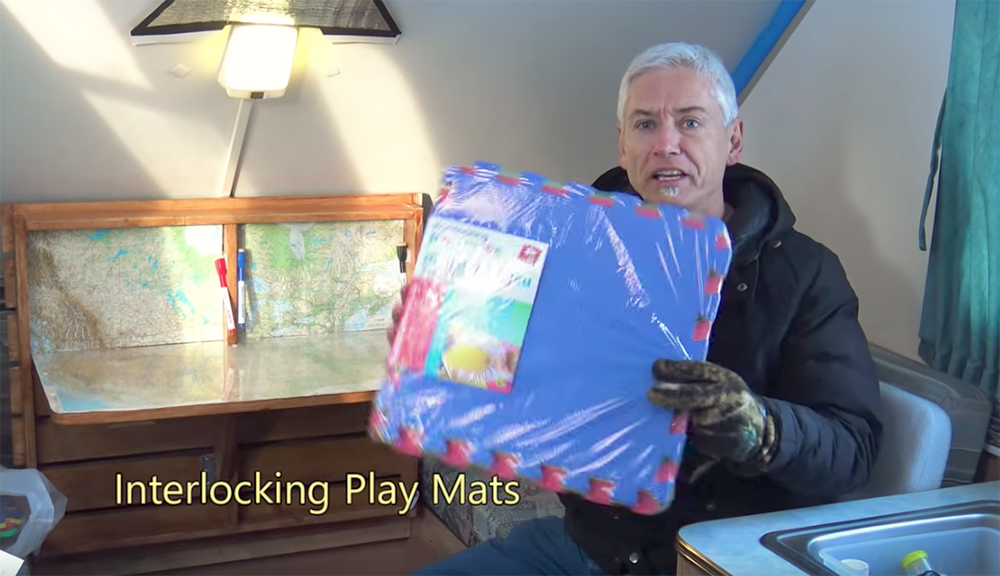 Slim does travel during the off-season and for extra insulation on his floor, he installed children’s interlocking play mats. While adding some primary color to the camper, the mats also don’t move around and offer a thickness not available with other insulation. 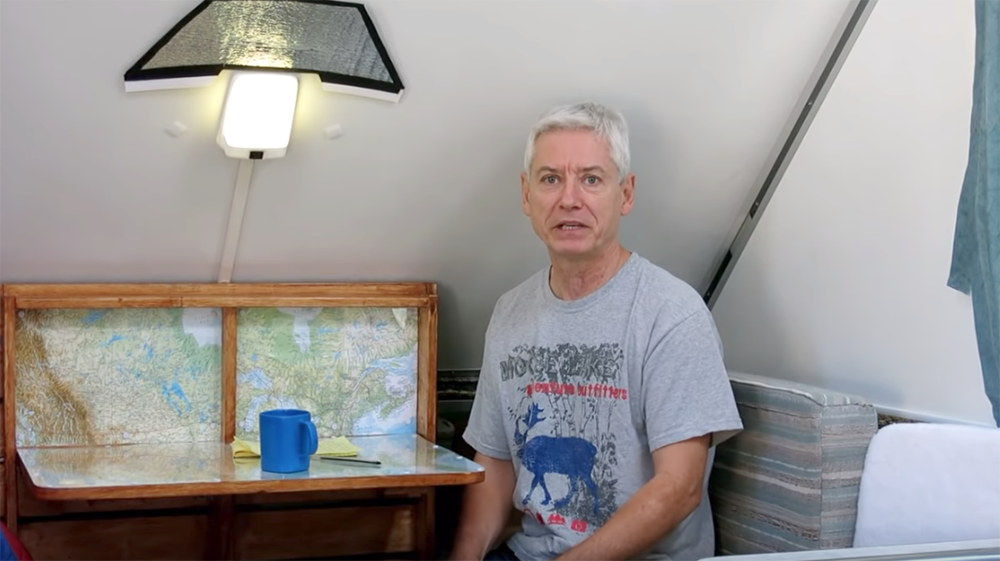 Slim’s Aliner came with standard dome lights that don’t offer much directional light. To light up his work table (complete with a North America map covered with Dry-Erase plexiglass) Slim used a mylar windshield reflector from a dollar store and some Velcro strips to make a dropdown lampshade.

The shade covers up the dome lamp to create better light for reading or trip planning. 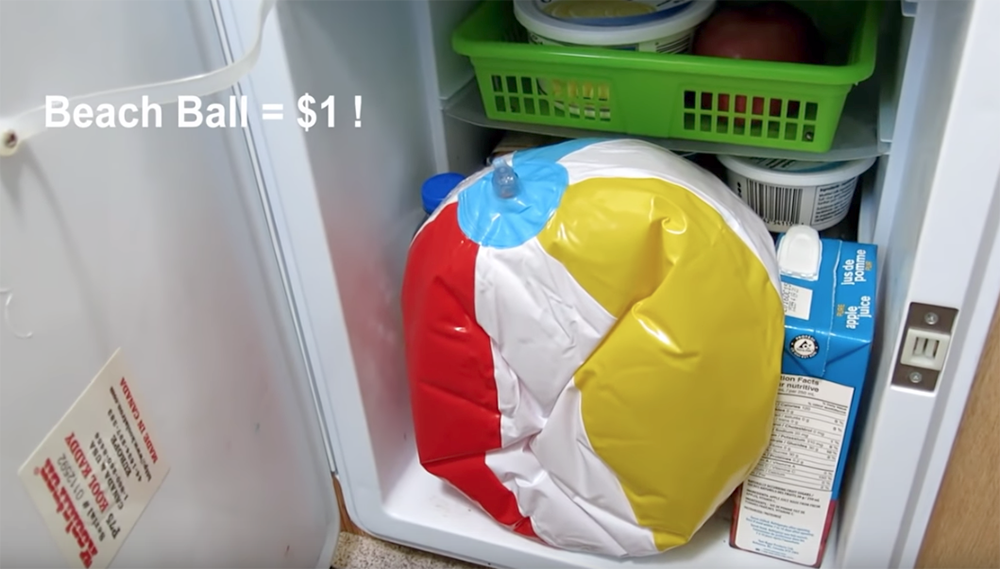 One of Slim’s cheapest mod ideas is also one of the most brilliant. Jars and other items in his cooler would sometimes break open or spill while he was towing his trailer on rough roads. To prevent food items from moving around, he placed a half-deflated beach ball into the cooler to pad the items. Inflate the ball for campsite fun!

Even though Slim concentrates his modifications on the Aliner, personalizing a manufactured RV really only requires some creative thinking, the courage to try something new, and the willingness to re-visit and update old projects.

1 thought on “This Youtuber Has Genius, Low-Cost RV Mod Ideas”