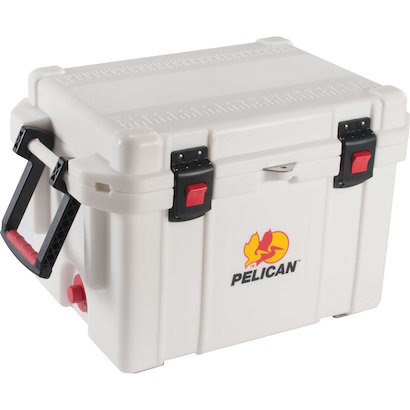 On February 10, 1957, the first food cooler made of styrofoam appeared on the market, 16 years after Dow Chemical engineers developed extruded polystyrene foam.

And as you could imagine, the styrofoam coolers were an instant hit!

While the coolers could keep ice frozen for up to 24 hours, they weren’t nearly as durable as many had hoped.

Now, decades later, companies produce coolers that look like something used by the military to protect sensitive and delicate equipment in harsh conditions.

We came across this in-depth review of the Pelican Elite cooler by Ballistic Outdoor Barbecue thanks to a post by NDNomad to the RV Travel Google+ group.

This is the cooler I use and have had for over a year now. highly recommend it to anyone who uses a cooler. I know it’s not cheap but in durability, usability, and ice retention I feel it is unbeatable.

Pelican makes sturdy cases for many industries. You’ll often find them in use by the military, cameramen, and outdoor enthusiasts.

This isn’t your ordinary cooler. If all you need is a cheap cooler for a one-time camping trip, you probably won’t get much benefit from this heavily reinforced model.

For frequent use, or for more extreme environments, having a cooler that can withstand heat for long periods of time might be just the thing you need – like when you boondock in the Arizona desert.