Skip to content
Table of Contents show
“Wham!” goes the tailgate as it hits the trailer jack.
One idea, thousands of truck tailgates saved!
Is your trailer jack bent?
Less than one turn and off the jack goes.
Spend $75 or buy a new truck tailgate? Hmm…
Share this post:

Many RVers with towables find it almost impossible to avoid truck tailgate damage. That’s because at some point, every trailering RVer will forget to detach the rig before putting their tailgate down.

“Wham!” goes the tailgate as it hits the trailer jack.

Good thing one Oregon couple had a lightbulb moment and invented “The Jack-E-Up.”

Is your trailer jack bent?

As RVers know, trailer jacks aren’t the most ergonomic invention. Many tricky road conditions get in the way of the jack, causing it to bend and break.

Then there’s the tailgate issue. Kent Madison know all about these problems: he’s an inventor by nature and writes on Jack-E-Up.com that, “The inspiration for Jack-E-Up came from when I bent my trailer jack while crossing a railroad track with my bumper-hitch trailer. It was such a frustrating experience that I swore I would never bend another jack again.”

Less than one turn and off the jack goes.

“I wanted to invent a device that would allow me to take the jack off of the trailer with just 1/6 of a turn with no pins or other devices that you had to lose or get in the way,” says Kent. Here’s what he came up with: 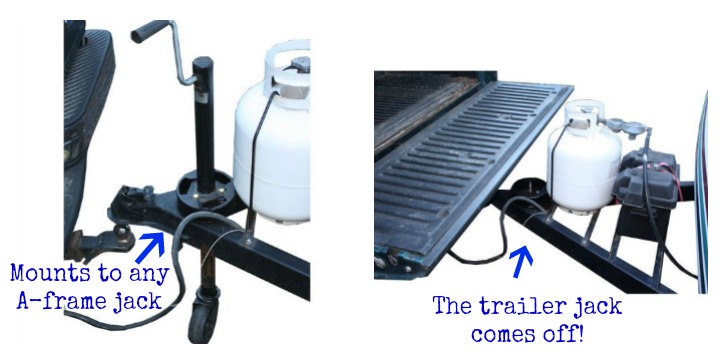 Any RVer who tows a bumper-mounted trailer can use Kent’s device. Not only does it save truck bumpers but it has other bonuses like:

“By setting the jack 7” higher, you don’t have to crank the jack up so hooking up is much faster,” explains Kent. “It solves all those problems with jack interference on the ground and tailgate interference with your pickup.”

Dinged up tailgates are practically inevitable when you tow a trailer. For around $75, you’ve got the cheapest way to avoid truck tailgate damage and keep your pickup looking brand new.