No need to hook everything up every time you want to BBQ. Try building this simple trailer mod to easily fold out your grill within minutes.
26
SHARES
3697
VIEWS
ShareTweet

Firing up the grill is one of the best ways to cook. It’s a lot more fun than just throwing your food in a microwave, and it really gives it that fresh, smoky flavor. But handling a grill when you’re on the road isn’t a simple process. Every single time, you have to drag out the grill, the propane bottle, get everything set up, and then when you’re done, take it all down and put it back away.

Thomas Clarkson of Trick My TrailManor was determined to find a better solution. He built this awesome mod for his 3124KS TrailManor so he could access and store his grill with much less hassle, and he took plenty of photos and notes to show us how to do it, too.

To start, he found an Olympian 5500 stainless steel gas grill. 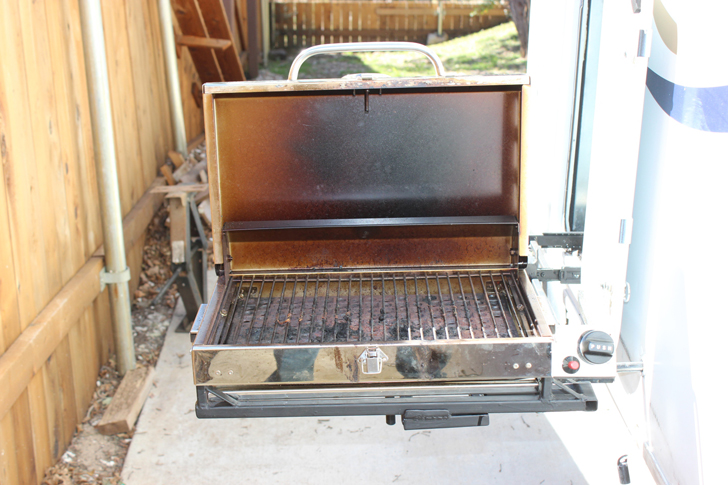 Then he needed to decide where to put it. Not wanting to destroy any cabinets, he decided the best place for this to work was the storage compartment under his bed.

So he grabbed a saw, and cut a hole so it could be accessed from the outside. He bought a hatch door online with close dimensions, and secured it in place: 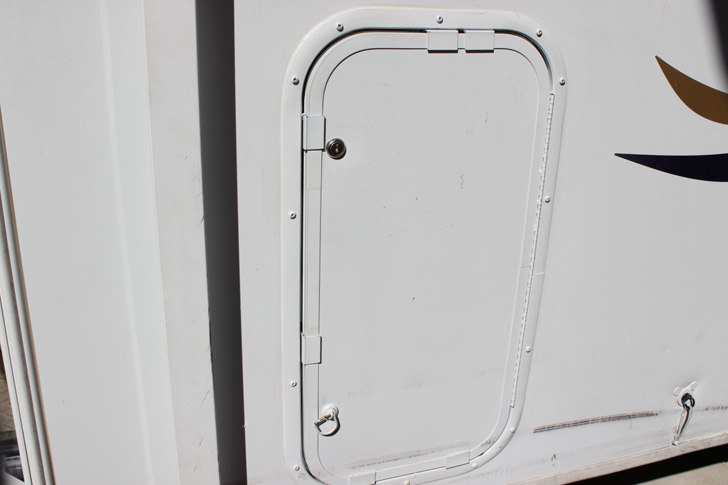 It was placed about 12 ½” from the back end of trailer: 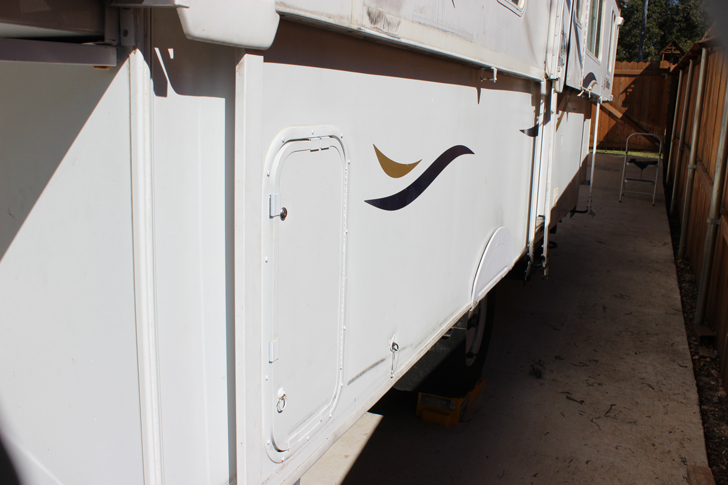 With the grill, hatch, welded steel, and some large drawer slides (that had the highest weight bearing capacity), he was ready to start building.

He screwed down the burner plate, grill grid, and anything else that could fall off. Once everything was secure, he mounted the grill vertically on the drawer slides. 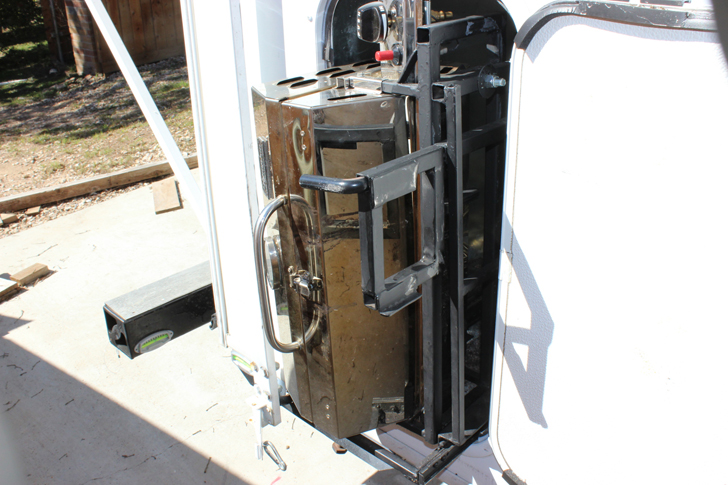 To access it, the grill smoothly pulls out from the hatch: 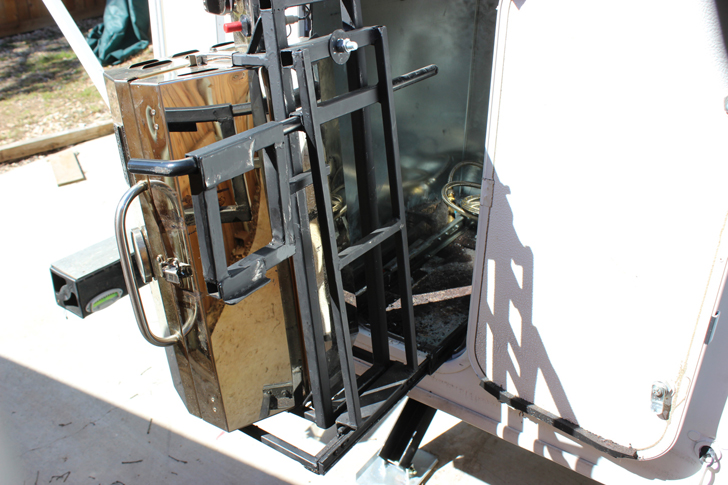 And then folds down: 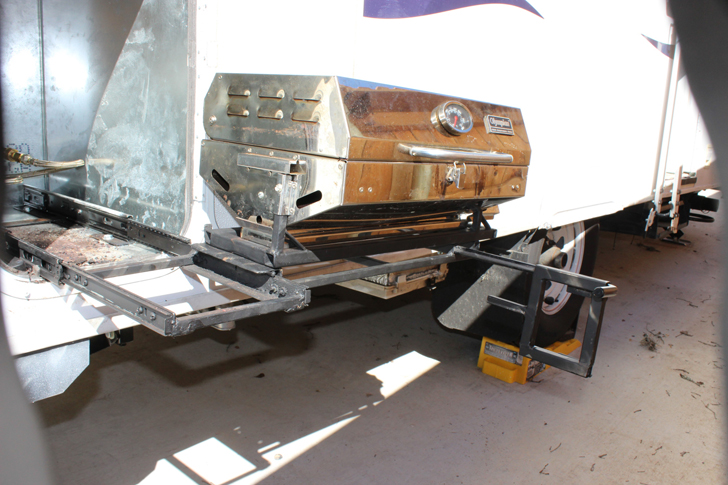 He also wanted to make the grill capable of rotating out to be perpendicular to his RV. It’s a lot easier to cook that way, and it’s less of a fire hazard. 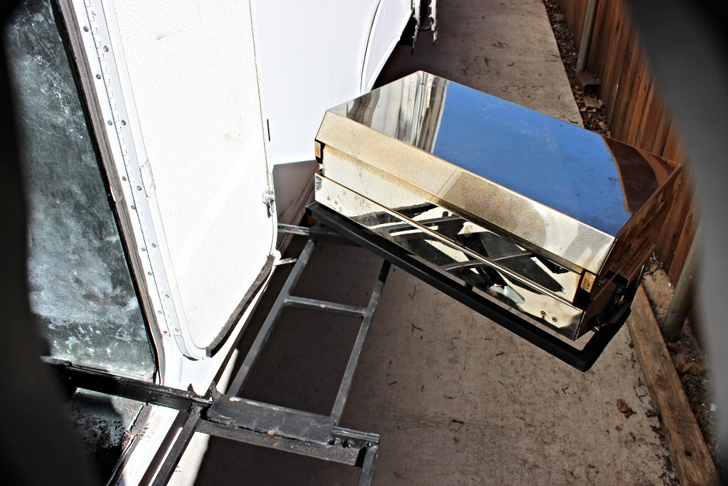 But the weight of the grill was too heavy, and it was causing the frame to sag. So he got a support rod (an L-shaped “cane” lock for an outside gate), and made a resting brace frame for the rod to go through, and the grill to sit on. 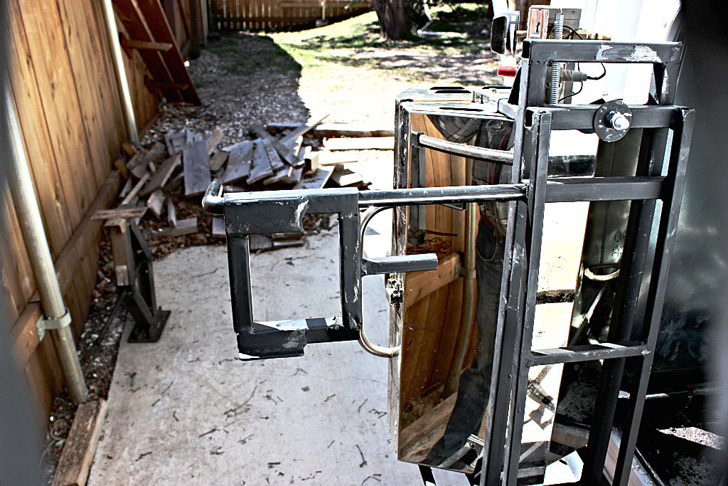 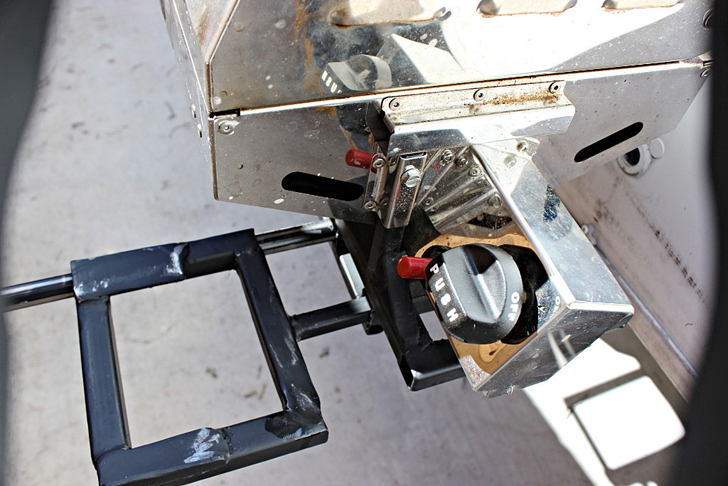 He slid the resting frame into the base of the grill frame. The support rod was then put through the base, and into a port on the side of the trailer: 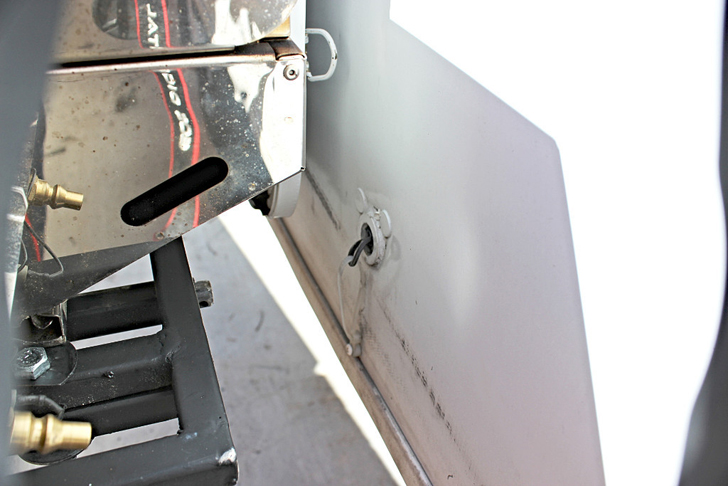 A local company built him this enclosure out of galvanized sheet metal to be screwed inside. He sealed it up with rubber weather sealing to prevent any of the barbecue smell from getting in. 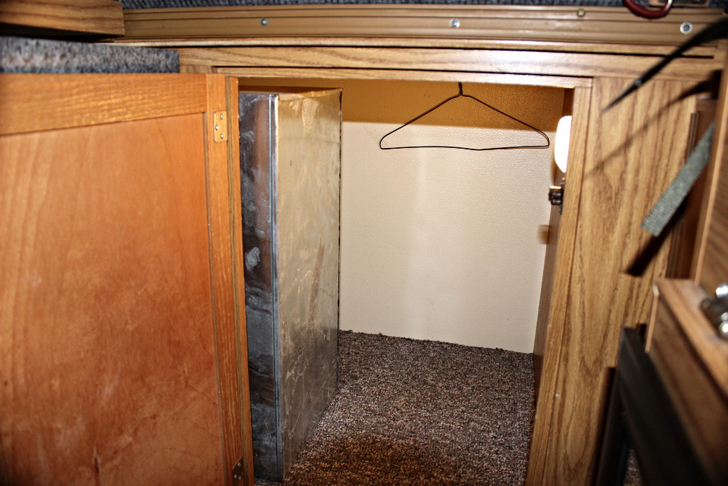 After getting the inside enclosure squared away, it was time to get the gas line all set up.

He’d mounted a “T” to the gas line that supports the oven inside, and added in a new line that ran to the enclosure. 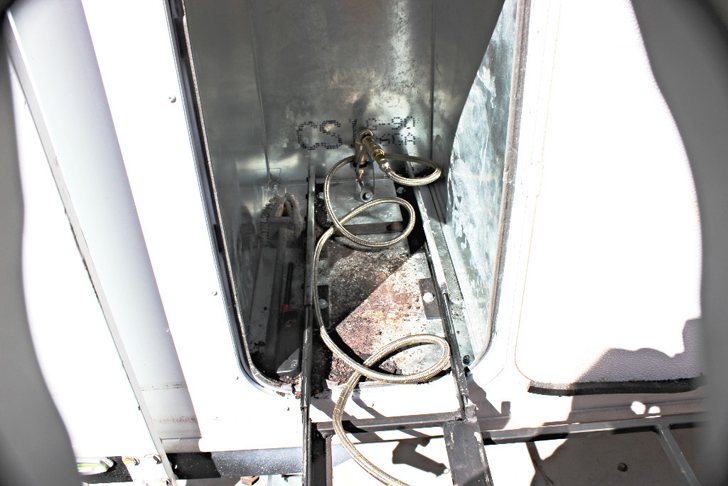 He placed a gas valve on the end of the line with an elbow, containing a quick disconnect fitting. This way, whenever he’s ready to start grilling, he just needs to plug the gas hose onto the grill and open the valves. 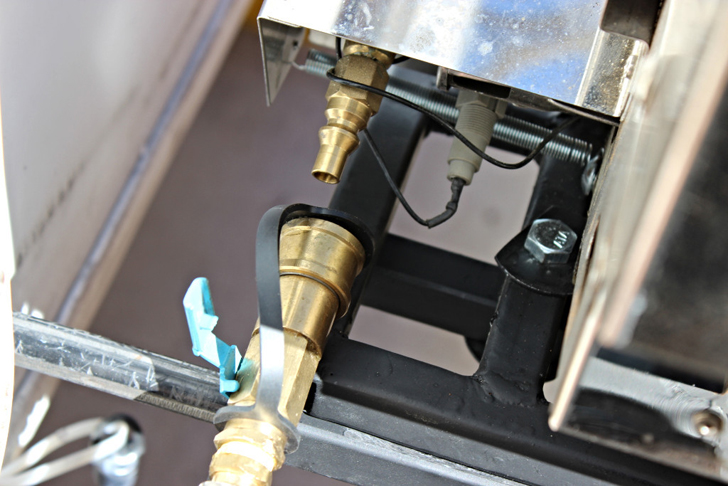 Later on, he also added in some waterproof LED lights so he can pull out the grill even after dark. 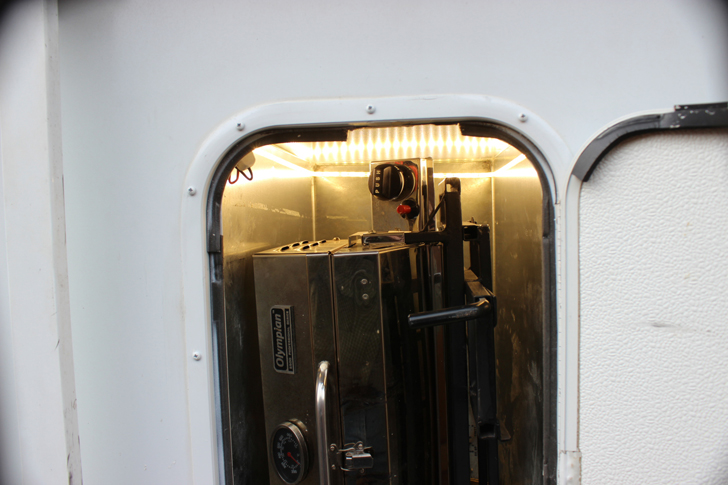 He ran the strip of lights through the compartment, and added a thumb switch on the hot wire side (seen below). 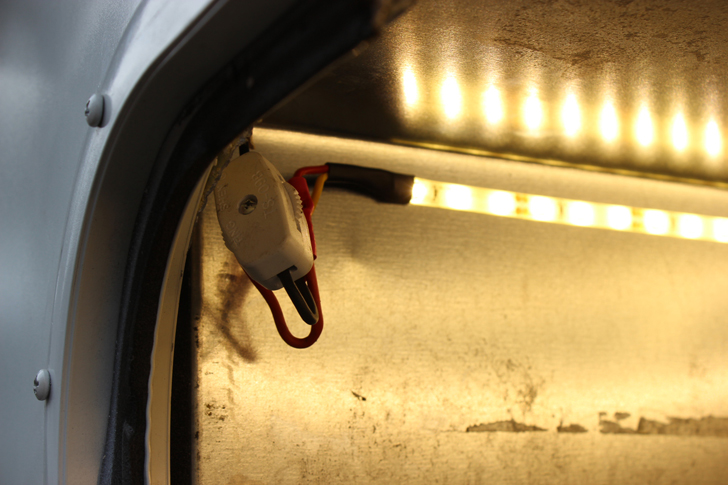 It’s now easier than ever to set up the grill and put it away after it’s cooled off. 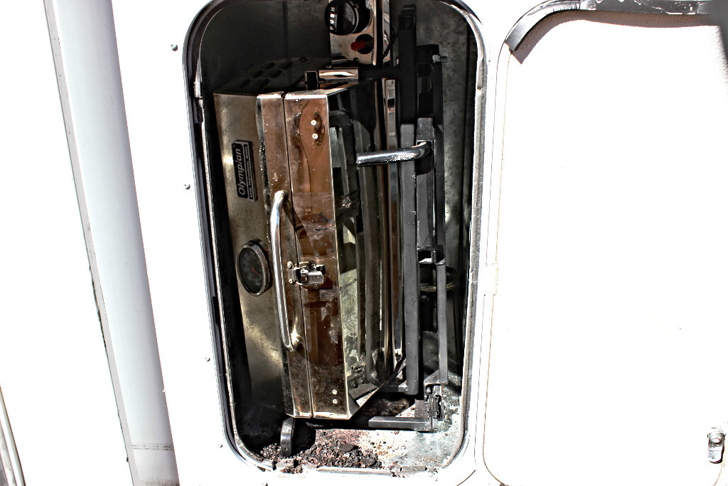 A special thanks to Thomas Clarkson for sharing his photos and expertise with us. Check out more awesome TrailManor mods over on his website here!

PLUS, if you’re a chef-on-the-road, you may also like these Slide-Out Kitchens For Overland Vehicles.