Doug Cuthbert is a retired helicopter pilot and Naval Academy graduate who wanted to spend more time with his family after a 26 year Navy career.

Although he and his wife had saved aggressively for twenty years, he didn’t want to spend his money on a ‘typical’ motorhome. He wanted each of his 3 kids to have their own bedrooms, and there just wasn’t (and isn’t) an RV on the market that could meet his needs.

So he built his own and named it the ‘Shachagra’.

Doug was a Naval Architecture major at the Naval Academy and had plenty of experience in designing boats. Although he didn’t use this skill in the Navy, Doug said,

I’ve never stopped designing boats. And she’s really nothing but a boat with 10 wheels.

Once he completed the rig, he and his family set off on a 16 month journey through 22 countries. They drove over 20,000+ miles, and had to ship the RV across the Atlantic twice!

What are the solar power specs?

The 2100W solar power system with 2100AH of battery (about 1 ton) and computer controllers was 13K alone. I think its the largest RV solar array in the world, and we needed every bit of it.

What type of chassis is it built on?

International 7500. The chassis is new, and amazing- all 8 rear tires are live, locking axles and differentials. It’s a dump truck that doesn’t dump. Good peace of mind when we were way out in the wilds of Turkey.

How much did you spend on your trip each month?

Just under 4K a month. That’s how much we had to spend and we always seemed to get pretty close to that limit. Funds came from saving. The wife and I have had a simple investment plan since we were 21, put 20% of our earnings away. Then we weren’t shy about using it when retirement came. There is nothing like it that I can find. The ones close were well out of our price range. 400 gal water, 270 gal diesel, 21K solar, I don’t think there is another like it.

How much did it cost to ship to England from the US?

It cost $4500 +$1500 insurance to ship it from Baltimore Maryland to South Hampton UK.  I don’t know why but the return trip was much more expensive, South Hampton to Jacksonville, Florida for $10,000.

What is the living space made from?

Wood/Epoxy with fiberglass (or carbon fiber) is significantly stronger than tubular aluminum which has a skeleton, and then a separate skin. This truck is built like a multi-hull sailboat, structure and skin are one, making it very strong. I’ve been in a Gale sailing a 44 foot sailboats built like Shachagra and it took a pounding that no truck is ever going to give it, made me very confident in that method of construction.

Why didn’t you just stay in hotels?

We didn’t want to stay at the best hotels in Europe, we wanted to stay in villages and on the beach in Turkey and Bulgaria. The hotels would have cost more than the truck, with nothing to show for it in the end.

Can anyone drive this thing? Do you need a special license?

How long did it take to build?

Favorite part about it?

How much did it cost?

Materials and labor for living compartment: $74,000

Don’t forget to take the poll beneath the videos! 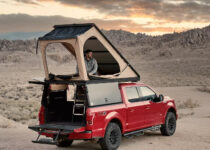 Lone Peak Overland has come up with the perfect design that turns your truck bed into a fully functional camper. 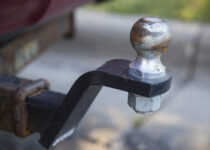 If you tow a trailer, greasing your hitch ball isn’t optional. Here’s the hitch ball grease you should be using every time you tow. 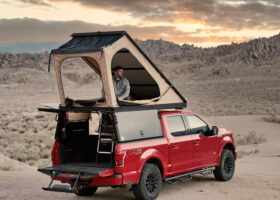 Turn Your Truck Bed Into A Camper With Lone Peak