The stores are stocked, the kitchen sinks overflowing with dishes, and the bar ready for patrons. The only thing missing are the people – they left about a hundred years ago.

Once bustling with bars, brothels, and bandits, today these four dusty ghost towns are abandoned, desolate, and so perfectly preserved that you’d think they’d been deserted overnight.

Ghost towns dot the landscape all across the Southwestern United States. These once thriving cultural hubs are usually associated with mining activity. The towns spring up when ore is first discovered, then when the money or lucks runs out, so do the residents – leaving behind empty houses, saloons, and school houses.

Come along for a thrill ride through four of the spookiest and most fascinating ghost towns around the Southwestern United States.

Located in the Sierra Nevada Mountains along the California-Nevada border, this former gold mining town is quite possibly one of the most famous ghost towns in the United States. Named for Waterman S. Body who discovered small amounts of gold in an area now called Bodie Bluff, the town quickly grew to an estimated population of 10,000 residents by the late 1870s. 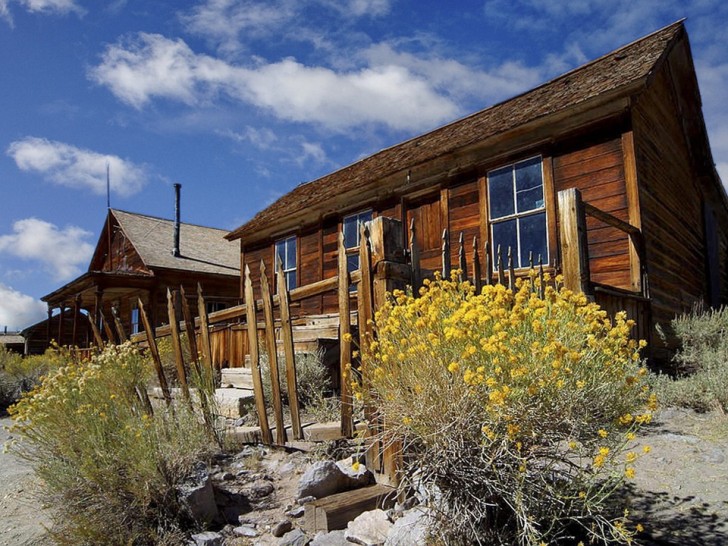 There were families and miners seeking fortunes, store owners, prostitutes, and bar tenders providing goods and services, and a parade of sheriffs trying to keep the peace. The town grew along with its population and soon became a jumble of modest cabins and store fronts alongside a whopping 60 saloons, gambling halls, opium dens, and numerous “houses of ill repute”.

The town’s slow decline began in the late 1880s when many of the get-rich-quick miners left to seek their fortune in newly discovered gold rush towns around the country. In 1913 the main mine shut down, soon after the Bodie Railway was abandoned, and by 1920 the population had dwindled to 120 hardy souls.

Today, the 100-or-so buildings left in Bodie are maintained by California’s park system, which protects the town in “an arrested state of decay,” which means the buildings are kept standing with few alterations.

A visit to Bodie reveals store shelves stocked with goods, queued up pool tables, turned down beds, and tables set for a dinner that never came.

Bodie is located 13 miles off Highway 395 down a dusty, bumpy road. The fee to visit is $5 for adults and $3 for children ages 1-17. Hours vary depending on the time of year, and while there are no facilities selling food, souvenirs or gasoline there is a bookstore and restrooms.

Share on TwitterShare on FacebookShare on PinterestShare on LinkedInShare on Email
Pages: 1 2 3 4