Skip to content
Table of Contents show
The Surface Orbiter with two other Dobbertin creations.
Front and rear views along with the original milk tank and the bare frame.
Heading down to the beach for launch.
Orbiter cockpit land controls on the left, sea on the right.
Rear of the Orbiter’s cabin with storage on the left and kitchen on the right.
The finished orbiter headed out, compared with Orbiter’s naked hull.
The orbiter moving away from the dock after launching
Share this post:

Just sit right back and you’ll hear a tale, a tale of a fateful trip… But instead of a three hour tour, this one was designed to be a one year, around-the-world cruise in a custom built RV. Rick Dobbertin of Syracuse, New York was an award-winning hotrod car builder when he hatched the idea to build an amphibious RV able to circumnavigate the entire globe. The Dobbertin Surface Orbiter.

The Surface Orbiter with two other Dobbertin creations.

The Orbiter started out in life as a 1959 Heil Milk Tanker. It took over 4 years to cut and weld the tank into a suitable capsule and build the drivetrain. The goal was a self-sustaining voyager that could make the trip without accompanying support vehicles. Before it was over, Orbiter, although short of its round-the-world goal, had traveled 33,000 over-land miles and 3,000 miles of open ocean.

Front and rear views along with the original milk tank and the bare frame.

Heading down to the beach for launch.

The finished vehicle was over 30 feet long, over 7 feet wide, 10 feet high and weighed over 9 tons when fully loaded. The truck is powered by a 250 hp, 6.5 liter GM V8 turbo, with a Penninsular Marine conversion. It is capable of holding 340 gallons of diesel fuel and features duel controllers, one side for land, one for sea.

Orbiter cockpit land controls on the left, sea on the right. 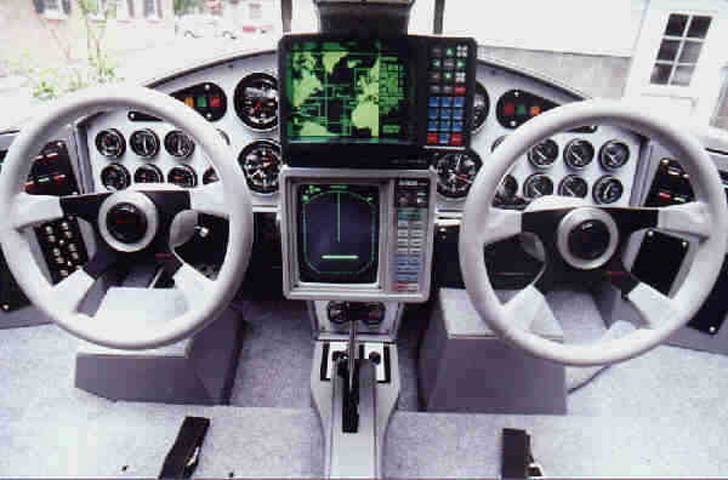 When Dobbertin first suggested the idea to his wife, she assumed he was just dreaming. Little did she know he would sink their life savings and over 14,000 hours of labor into building the vessel. The couple set out on what Dobbertin believed would be a one year trek around the world, but ended three years later when the funds ran out.

Rear of the Orbiter’s cabin with storage on the left and kitchen on the right.

By the time they reached the end of the line, the Orbiter had been stopped by the DEA and FBI, posed for a picture with Colombian guerrillas and was the first amphibious vehicle to navigate the Panama canal. By most standards, the experimental vehicle was a huge success. Although radio trouble and internal fuel spills caused difficulties.

The finished orbiter headed out, compared with Orbiter’s naked hull.

The Orbiter was outfitted internally with everything, including the kitchen sink, although the climate control left something to be desired on the ocean portion of the voyage, with the occupants finding it was far too hot. It will also cruise at up to highway speeds on the open road, fairly impressive for a vehicle of this size.

The orbiter moving away from the dock after launching

Dobbertin’s RV building career did not go past this one venture, but his work was praised in several automotive and other magazines. It has also gotten attention from educators around the globe who have used Dobbertin’s voyage as a way to discuss mathematics and science with their classes in a way that brings theory to real-life!