Skip to content
Table of Contents show
Not messing around: they removed the old camper shell and started their build from scratch.
3-millimeter thick marine-grade plywood proved easy to bend.
With only the old camper design to go off of, they had to freehand the new skeleton.
Insulation glistens between the framing.
Patio chair cushions serve as makeshift beds.
Custom wooden storage cabinet for an ice chest.
One of their daughter’s friends painted a custom nature-themed mural on the inside of the door.
And the finished camper!
Share this post:

Terri Trier and her husband wanted to rehab an aging camper, but they ended up getting more than they bargained for when they came across a late 60’s model.

“My husband and I bought a vintage ’69 camper to fix up but when we started pulling things apart and realized it was too far gone, we completely stripped it down the frame and built our own camper on top of it.”

Not messing around: they removed the old camper shell and started their build from scratch. 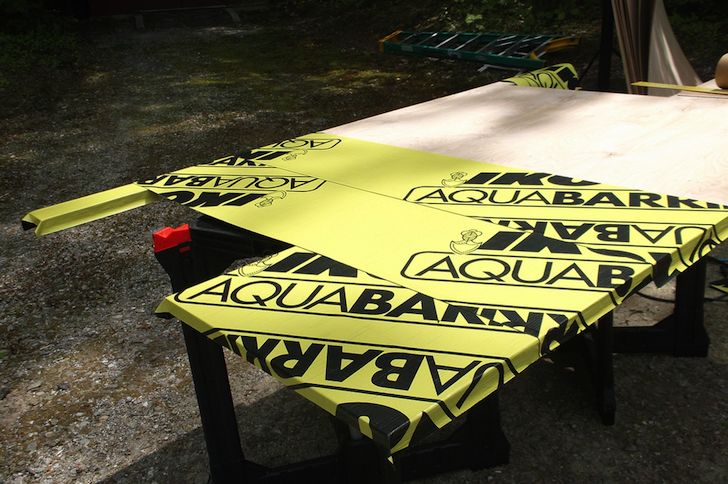 We also found a local wood dealer who was able to sell us marine grade ply that was only 3mm thick so we could bend it.

With only the old camper design to go off of, they had to freehand the new skeleton. 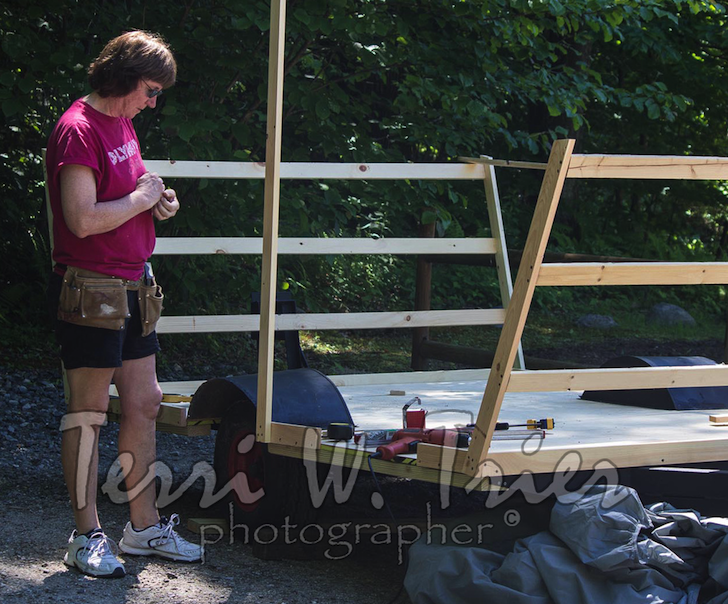 We had no experience building anything like this so our building methods were a bit unconventional. That being said, we did not use the old camper for a template, but did try to roughly mimic the old shape. We literally would hold up a piece of wood and when we like the angles we would cut all four pieces to match.

To get the angle we wanted for the roof, we actually laid out the plywood/lauan between two saw horses and stretched out an electrical cord until we found the shape we liked.  We then ran a pencil along the cord and traced the curve onto the wood.  We cut the piece and then made a duplicate for the other side.

We used thin lauan for the first layer of the walls and marine grade plywood for the exterior skin.  We finished it off with a marine epoxy (West System), then because the epoxy does not hold up to UV rays, we had to use polyurethane (Dream Boat) for the final coats. 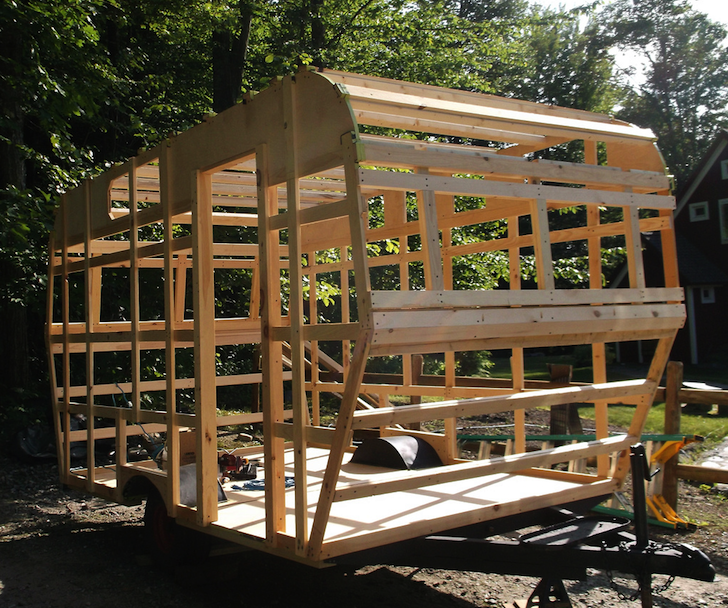 Insulation glistens between the framing. 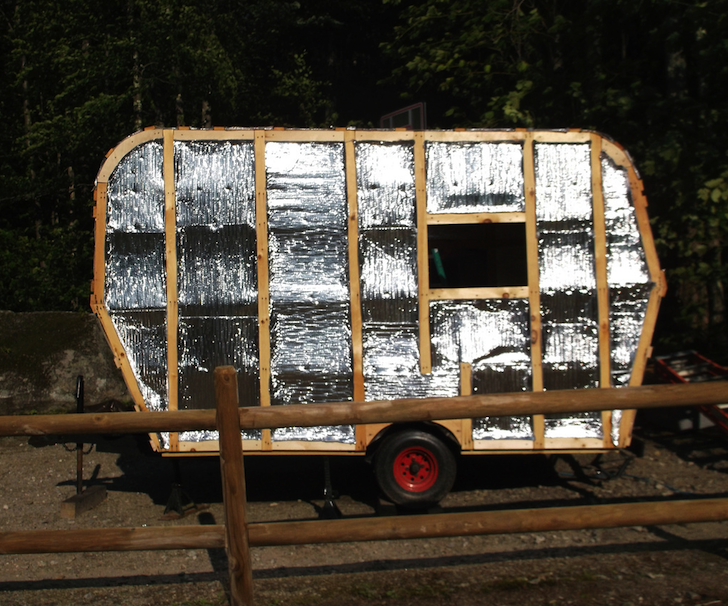 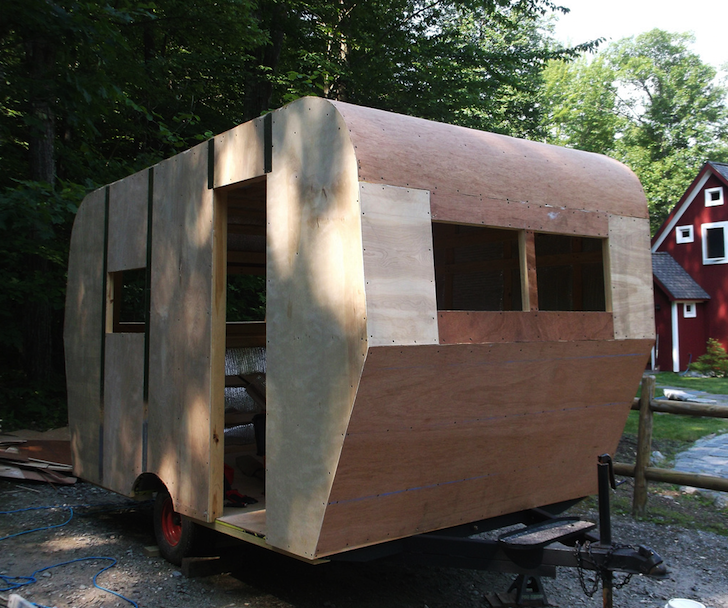 Instead of a bed, we bought durable patio chair cushions and they are super comfortable to sleep on. Also, instead of cabinets, we built shelves and bought baskets to hold food and such. This allowed us to keep the rustic look we wanted. The only thing we used from the original camper was the door, though we had to modify that as well. We love taking our homemade camper out for the weekend. 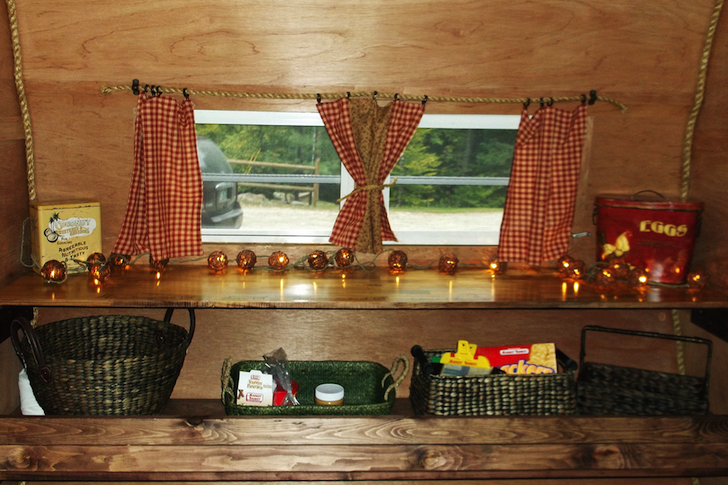 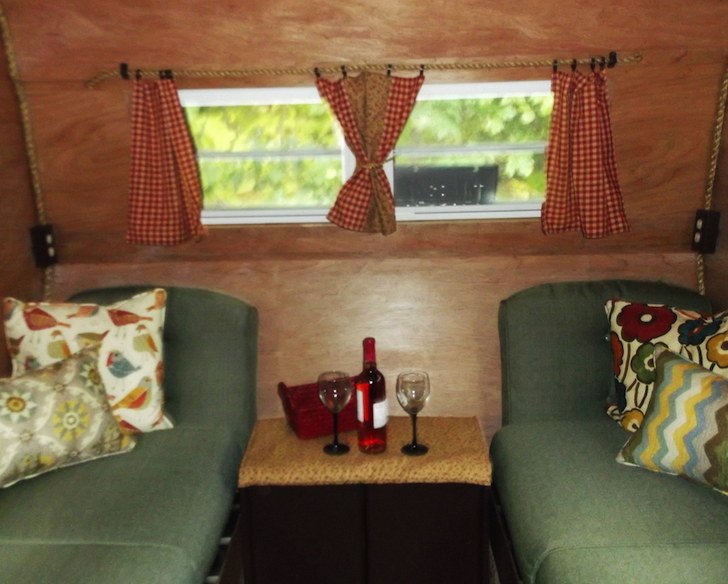 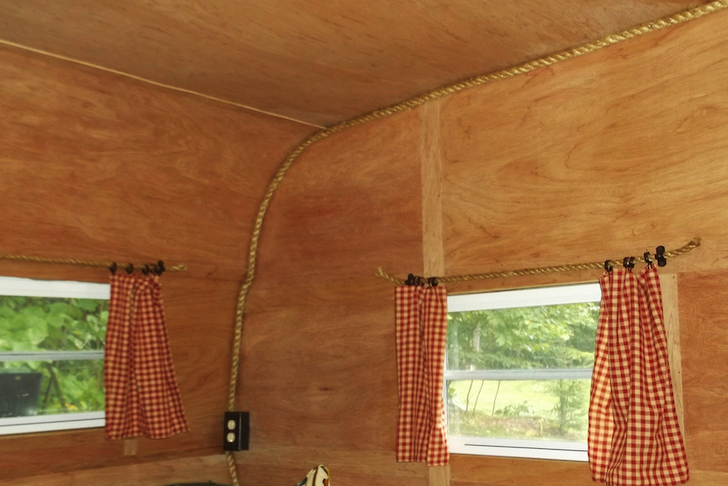 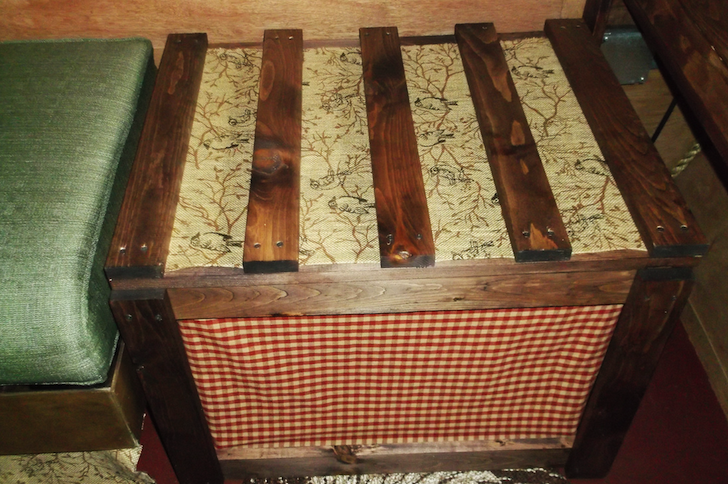 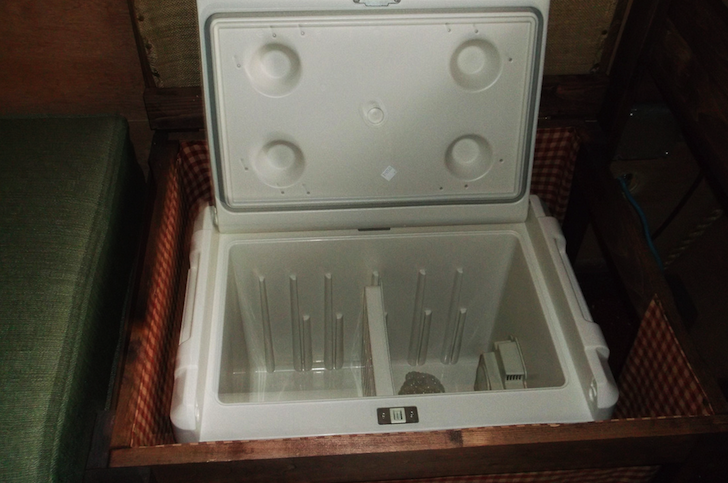 One of their daughter’s friends painted a custom nature-themed mural on the inside of the door. 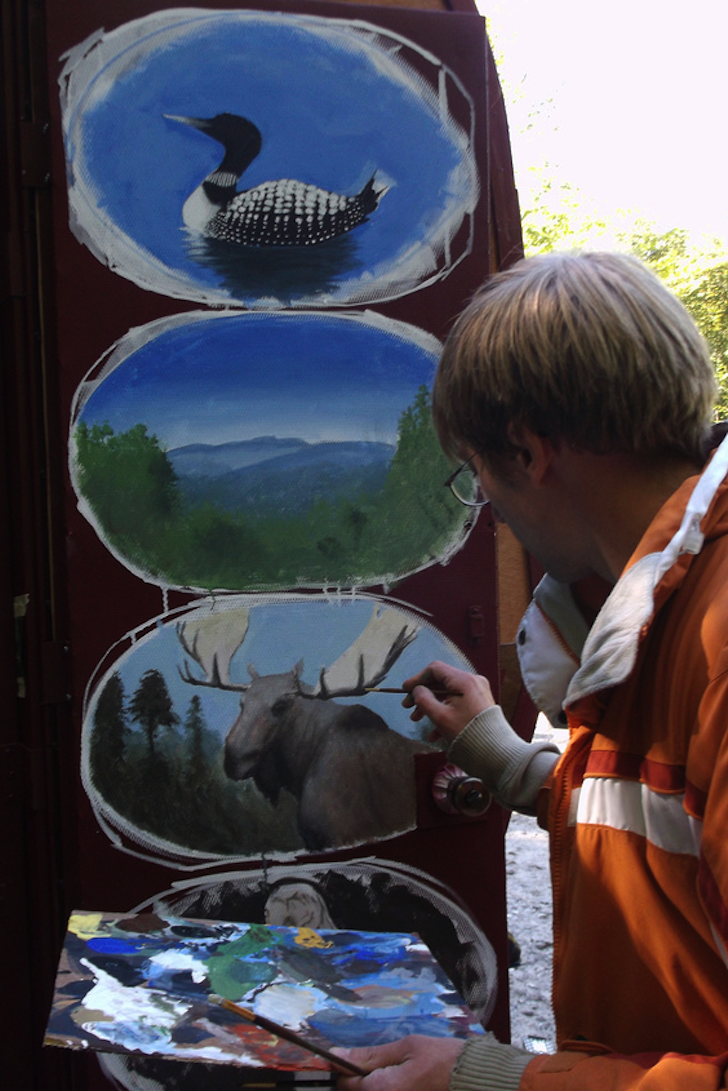 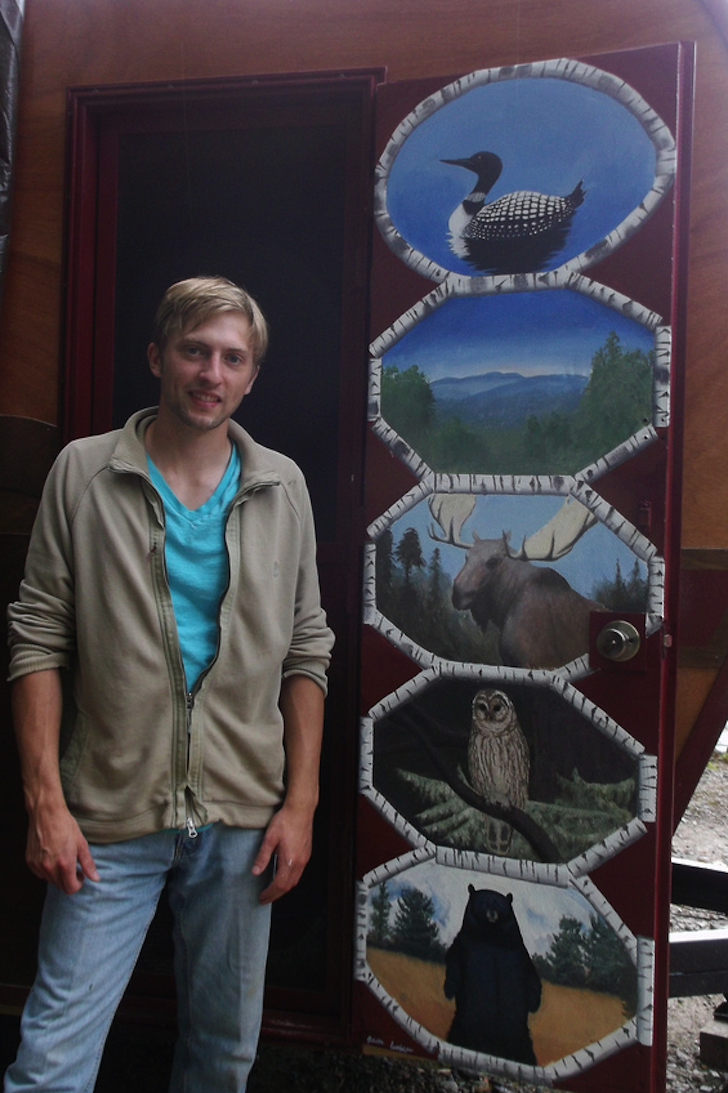 Our daughter’s friend, Jason Lester, who is from London, was staying with us for several months. He is an artist and we wanted him to create something to dress up the door. He used animals that are found in New Hampshire for inspiration and the landscape was taken from the view on our property. He is back in England now and we miss him a lot, but each time we take the camper out we get to think of him.

And the finished camper! 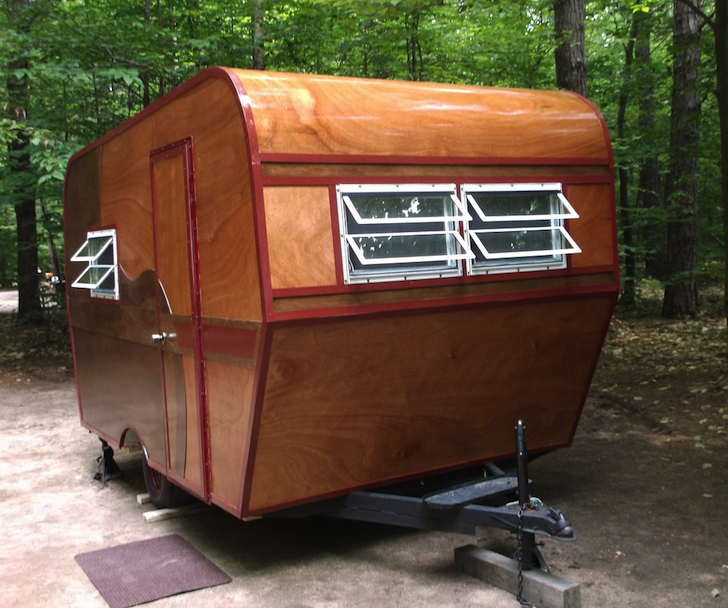 By doing some research I was able to find some inexpensive shed windows that opened just like the vintage ones. 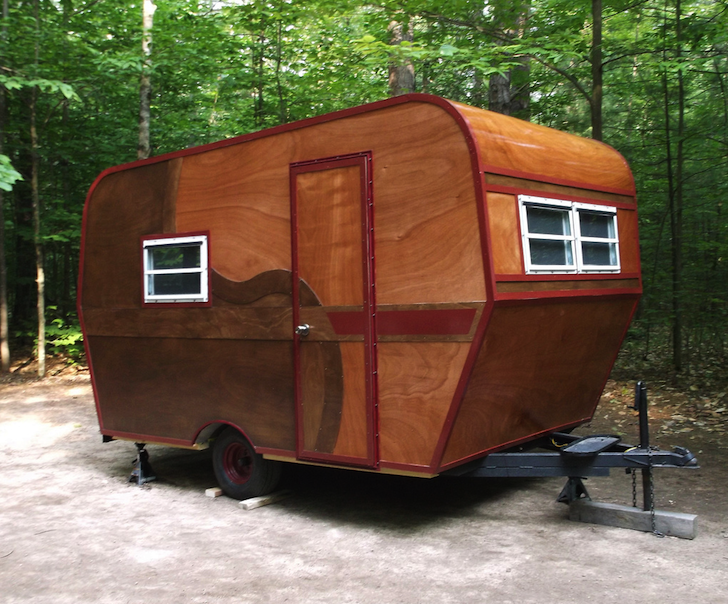 The two-toned wood finish makes the outside of this camper look more like the interior of a yacht! Thankfully, Terri and her husband took pictures as they pieced this beauty together. You can be pretty sure they’re going to get asked about it at the campground!