If you’re an avid motorcyclist, you might wonder how you can tow a car and haul your motorcycle at the same time.

Chris and Cynthia of Vero Beach, Florida have figured out a way to do just that.

They drive a Sea Breeze Class A motorhome with an Acura toad, but Chris also wanted to take along his Harley-Davidson motorcycle.

He wanted to install the Hydralift system on the back of the motorhome, but there just wasn’t enough clearance to the towed car.

To prevent the Hydralift from smashing into the Acura during turns, Chris decided to extend the motorhome’s chassis several feet.

On our gas puller our extensions prevent the lift from scraping the grill of the Acura if we make a turn into a gas station where the rig front goes up the entry ramp. The distance from our rear wheels to the lift receiver is enough to leverage the drop enough to hit the tow vechicle.They needed to extend the chassis several feet for turning clearance with the toad.

Chris has to remove the luggage racks from the bike prior to driving it onto the Hydralift. 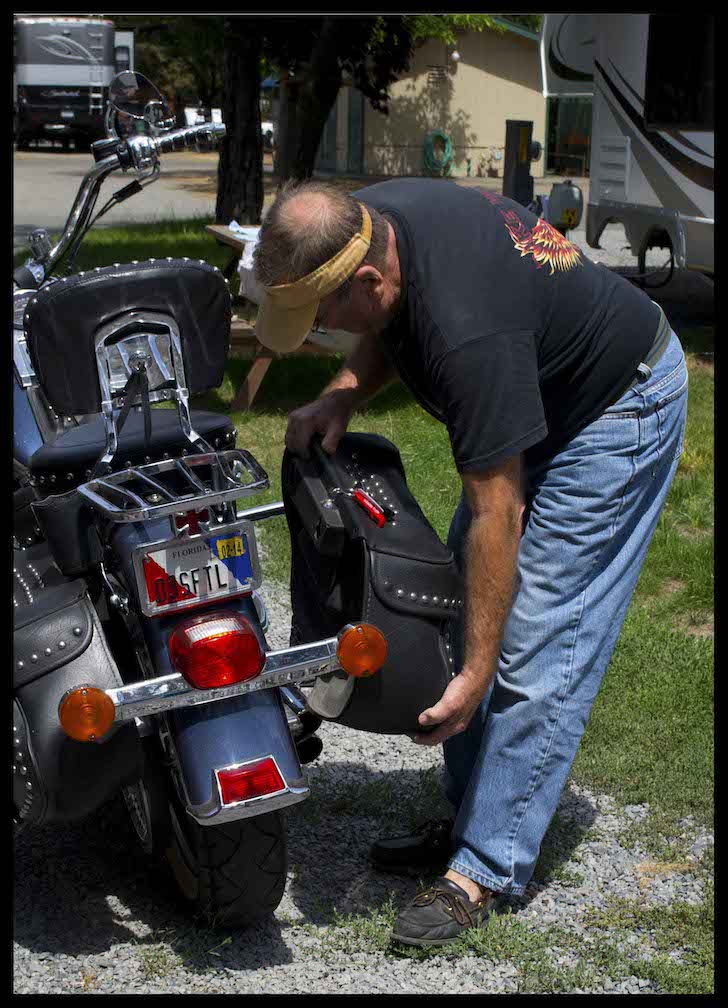 He spent about $10,000 to extend the chassis of the Seabreeze several feet. This allows the Hydralift system to clear his wife’s towed Acura. 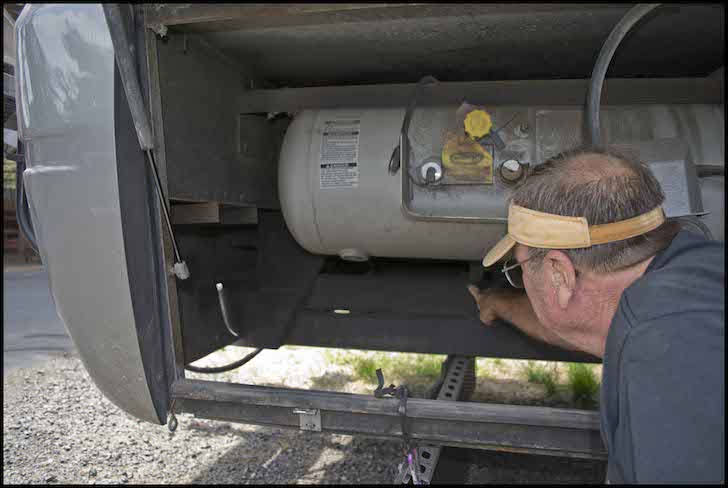 The Hydralift system allows RV owners to carry motorcycles and trikes on their motorhomes or 5th wheel trailers. The systems can hold up to 1,000 pounds and will accommodate most all motorcycle and trike models on the market. There’s even a version for carrying quads or two scooters.

Here he is demonstrating how to lower the Hydralift. 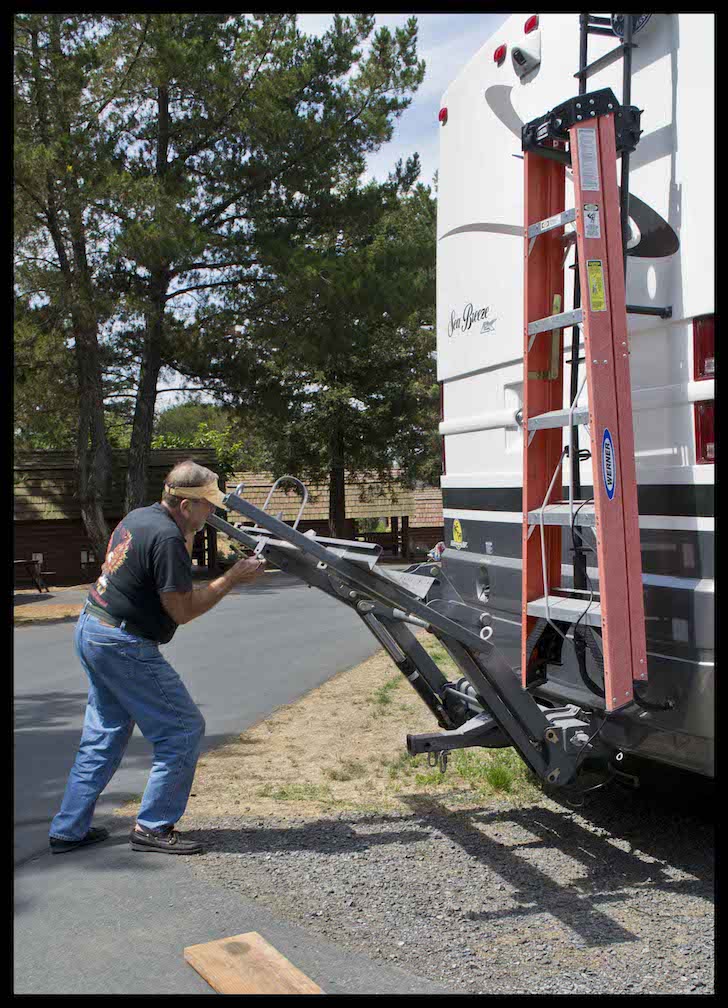 …yes, the added extensions allow more movement than I would like which hastens the wear on the pin holes. I have since reduced the movement by at least 70% by adding one inch wide+ by about 1/8″ thick metal framing ties of various lengths from Home Depot on the bottoms of the receiver and extensions. To reduce lateral movent I slipped in even thinner strips from my junk pile on on side of an extension. So far nothing slips out…but a little thought (duc tape, bungee, or?) might remedy a wayward slat.

Driving the hog into position on the Hydralift. 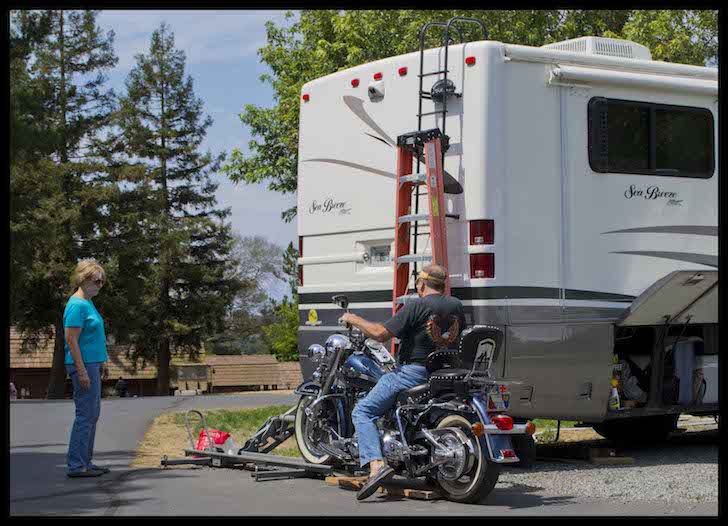 Once the Harley is in place, it’s a simple matter of letting the Hydralift raise it into position. 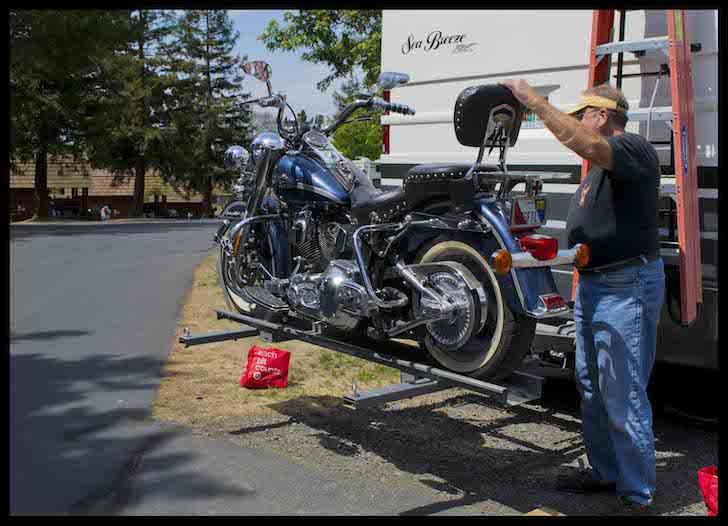 With the Harley secured, Chris can rig up Cynthia’s Acura. 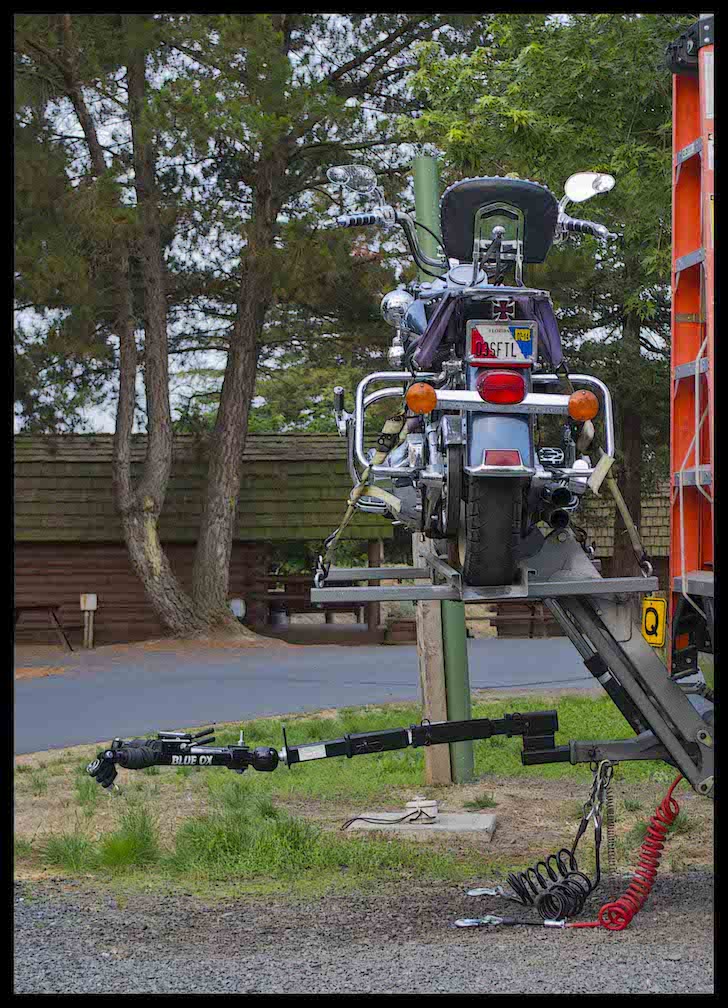 Hooking up the Acura and getting ready to roll. 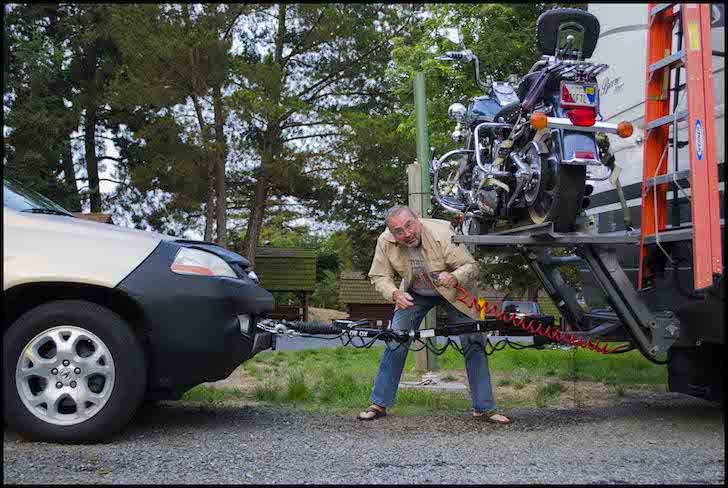 Chris and Cynthia outside their Sea Breeze motorhome. 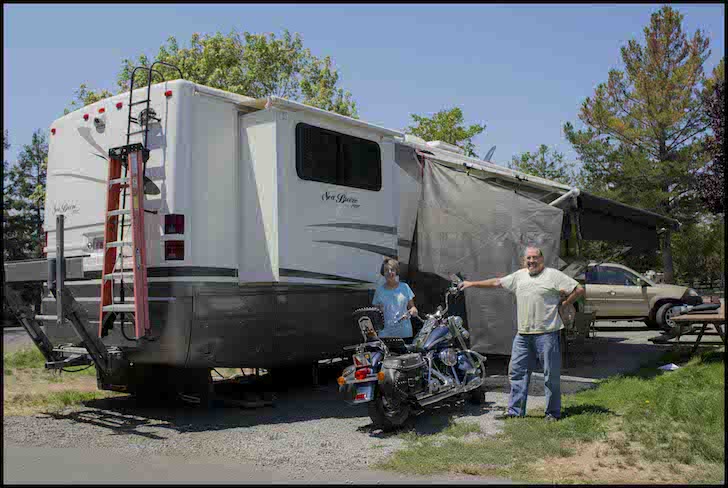 You can learn more about the hydraulic Hydralift system on the company’s website here.

This video from Torklift Central Welding will show you how the Hydralift system works in realtime.

Via: RVT
Photos: Chris and Cynthia