Skip to content
Table of Contents show
Putting the BodySpa to the test
Our conclusion? It’s a must-have.
The Oxygenics Bodyspa Showerhead is available online for about $32. Find them on Amazon here.
Share this post:

It’s no secret that RV showers are a lackluster experience. Whether you’re dry camping in the outback or living large with full hookups, showering in the rig is about as exciting as brushing your teeth. It’s just a chore, and something you don’t look forward to.

While it’s great just to have bathing capabilities when you’re camping, RV showers have never made it to my personal “Top 10 Things I Love About RVing” list—until now.

The original metallic-finished showerhead that came with my new fifth wheel looked prettier than most RV bathroom fixtures, but I would quickly learn it was a piece of junk that clogged up within a few months of full-time RVing.

I put up with this stock showerhead for as long as I could, but finally gave up when I suffered through yet another shower with water pressure so weak that I ran through our hot water supply before my hair was rinsed.

With soapy hair and a tight wallet, I headed to my nearest RV supply store to get a replacement fixture.

Like most RV supply stores, I was given a choice of three types of shower heads: the stock model you see in all standard RVs, an upgraded version that’s designed to look like a residential-style showerhead (but with performance that doesn’t come close, as I discovered in my previous rig), and finally, a product that appears to be a combination of both, the Oxygenics BodySpa RV Shower Kit. 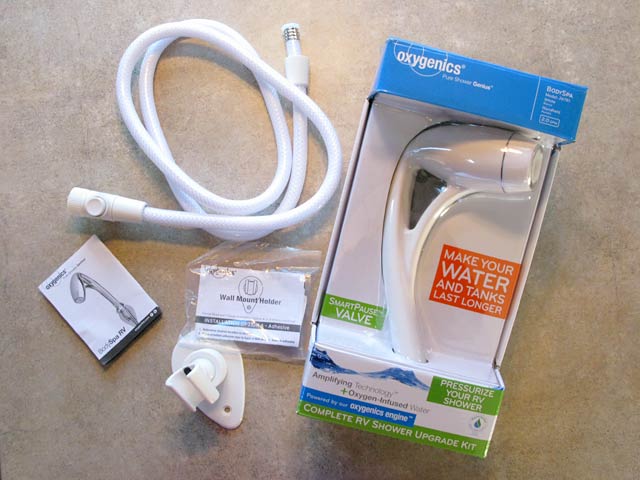 The cheapskate in me almost returned the Oxygenics package to the shelf when I saw it cost twice as much as the others. But I held onto it once I started reading packaging claims that perfectly echoed my recent showering experiences:

A salesman approached and told me that the BodySpa is the unit to take home. He backed up his claim by describing how he has a regular customer who always buys four or five at a time from the store. When this customer goes boondocking with other RVers, he raves about his BodySpa showerhead to other campers and ultimately convinces them to buy one from him and try it out.

The company is vague about how its patented technology makes the BodySpa live up its claims, but I don’t care how something like this works. I just want it to.

Since I love to go boondocking (despite our 50-gallon water tank), the claim about making my supply last longer is what finally convinced me to crack open my wallet and go home with this “upgrade kit.”

Putting the BodySpa to the test

When we got home, I wondered how big of an ordeal replacing the old shower head would be. Before I could picture a worst-case scenario, my husband Jim installed it in less than two minutes. He didn’t need any tools since we used our existing mount.

If you use the Oxygenics showerhead mount, you’ll only need a screwdriver. Upgrading your RV shower with an Oxygenics isn’t a tough RV mod, it’s so quick and easy!

Next came the real test—taking a shower. My super skeptical husband went first, then came out of the bathroom by saying, “Yeah, that was pretty good.” When I asked this man of few words, “Is it the best shower you’ve ever had in the RV?” He replied with “Yeah!” Like most men, Jim isn’t one to rave about domestic stuff like this so I was impressed.

My turn came a few minutes later and I was impressed as soon as I turned on the shower. The water spray that poured out felt fabulous, like big, generous water droplets equal to the best showerheads in a sticks-and-bricks home. I noticed more water pressure too, which made me think there was no way the BodySpa would live up to its claims of making my tanks last longer.

But for the first time ever I was able to go at a reasonable pace and wash my (thick) hair, soap up, shave my legs, and completely rinse without running out of hot water. While everyone’s shower times are different, I enjoyed a nice 10-minute shower experience—pure luxury for a full-timer in a small 27′ fifth wheel! 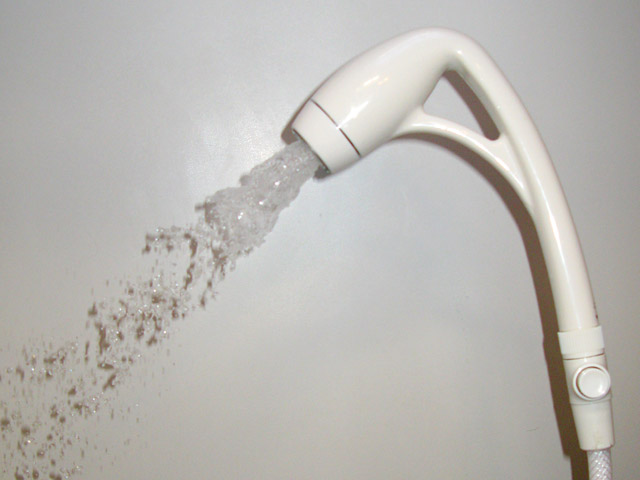 As far as Oxygenics’ claims about “amplifying” water pressure, they’re fully justified in saying so: Jim turned on the kitchen faucet when I was showering and I never even knew it. This was a first.

For my second Oxygenics shower he did the same thing at the bathroom sink, and although I felt a slight drop in pressure, it still wasn’t enough to make me yell, “Shut that thing off!”

Another great thing about the current BodySpa model is its “SmartPause” valve feature that allows you to restrict water flow to a small water stream for soaping up. At first, we thought this valve was useless since you can’t completely pause the water at the showerhead as you can with others. 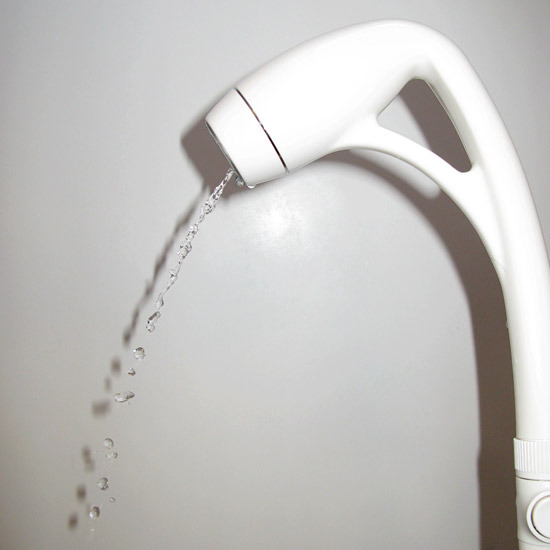 But I quickly discovered a use for it – you can still have a bit of water going when shaving while saving up the rest of your hot water for a finishing rinse.

My only complaint about the SmartPause stream is that the water turns cold when it’s on, so you’ll need to adjust your hot/cold water supply accordingly.

Our conclusion? It’s a must-have.

I’m not sure what took us so long to find this product since Oxygenics isn’t new to the RV market and they’ve been supplying the hotel industry for decades.

The Oxygenics BodySpa has received positive reviews by other RVers, but since I’ve never been one to spend this much on such a simple RV fixture, I guess I’ve glossed over them. Now I realize that a good RV showerhead is important.

A good shower experience can get your day off to a great start. With a “BodySpa” showerhead upgrade, my full-timing lifestyle is better than ever.

The Oxygenics Bodyspa Showerhead is available online for about $32. Find them on Amazon here.