Skip to content
Table of Contents show
Mountain Biker Trevor DeRuisé and Sierra Davies lived for 3 months out of a Ford Econoline.
Trevor removed a row of seats to make room for gear and a work space.
The van fit four bikes on a 2×4 platform including a practice bike.
Trevor cooking tamales on the camp stove. The couple would periodically “borrow” plastic forms from restaurants.
Project VanLife is available on Amazon and the Project VanLife website.
Share this post:

Trevor DeRuisé is a professional American mountain biker who plans on being a contender in the 2020 Olympics in Tokyo, Japan. His training and racing against the best in the country needed to be accomplished on the road and the best way to do that was in an inexpensive van.

Trevor converted a used Ford Econoline to fit several mountain bikes and gear, a mattress and tent, and his girlfriend, Sierra Davies.

Mountain Biker Trevor DeRuisé and Sierra Davies lived for 3 months out of a Ford Econoline. 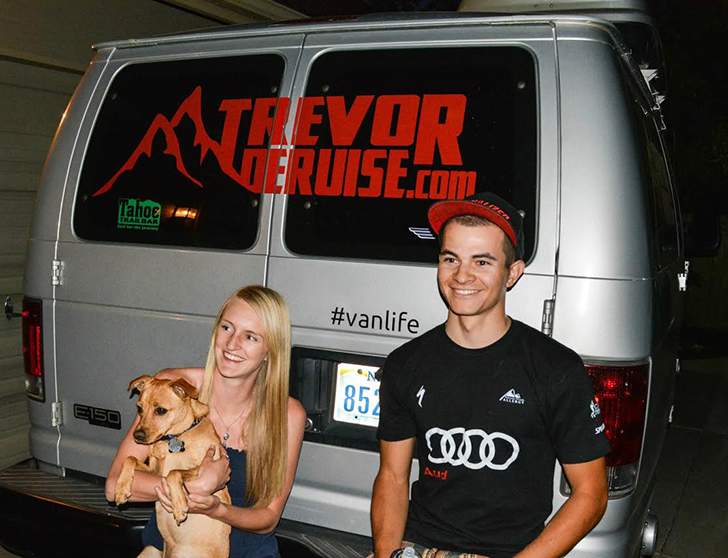 The couple traveled around the U.S. to the 10 largest mountain bike races of 2014. The trip took them from their home in California to Colorado, Montana, Wisconsin, Indiana, West Virginia, Pennsylvania, New York, Vermont and even up into Quebec.

The couple slept in Walmart parking lots, KOAs and cheap campgrounds to save money. Sierra ran her web and design business from the van on the trip and they worked on a filming project for TrainerRoad, a local indoor cycling software company. The couple wrote a book on their journey—Project VanLife.

“Project VanLife is the story of our time in the van,” Sierra said. “But more than that, it is a story about creating goals, pursuing your dreams, taking risks, and living the life you are passionate about. It’s about going against the grain and finding ways to make anything work.”

Trevor removed a row of seats to make room for gear and a work space. 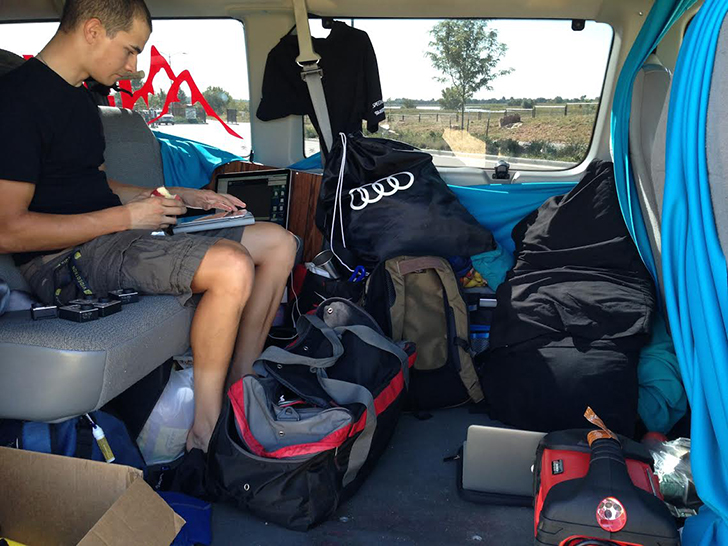 The 2004 Ford Econoline already had 58,000 miles on it when Trevor and Sierra purchased it for their trip. The van had three rows of seating and the couple took out the middle bench so that the space between the driver and passenger seats and the back row would serve as their living area.

All personal belongings rode here including an ice chest, a small generator, cooking gear, air mattress, blankets and pillows. The last row of seats were left to serve as a place to sit and work or eat. Sierra said that the seats usually became a makeshift shelf for all their stuff.

Behind the bench seat, Trevor built a platform that would hold and secure all of the bikes. The 2×4 plywood platform was lifted one foot above the van floor, so underneath served as storage for a canopy tent, table, chairs, and other large items. Built onto the platform were four bike mounts, two for Trevor’s race bikes, one for Trevor’s practice bike, and one for Sierra’s bike.

The van fit four bikes on a 2×4 platform including a practice bike. 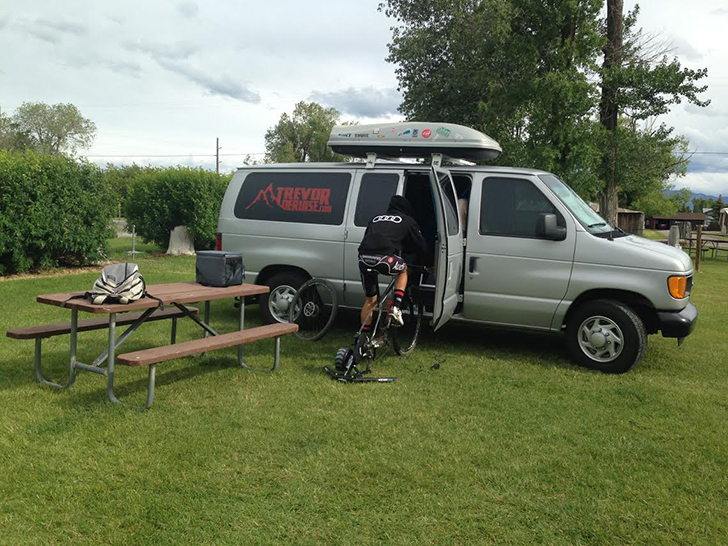 The van was an inexpensive way to travel, but had its problems. Sierra mentioned that both she and Trevor were too tall to stretch out entirely while sleeping inside the van and each day some re-organizing would need to be done.

The bugs were so intense in some places that the couple couldn’t sleep with the windows down (vans don’t have screens), and the nights when it was cold (like sleeping on top of Vail pass), it was numbingly cold.

“I guess the best part about the van was that we bought it cheap and sold it for almost the same price we bought it for, even after putting around 30,000 miles on it in one summer.”

Trevor cooking tamales on the camp stove. The couple would periodically “borrow” plastic forms from restaurants. 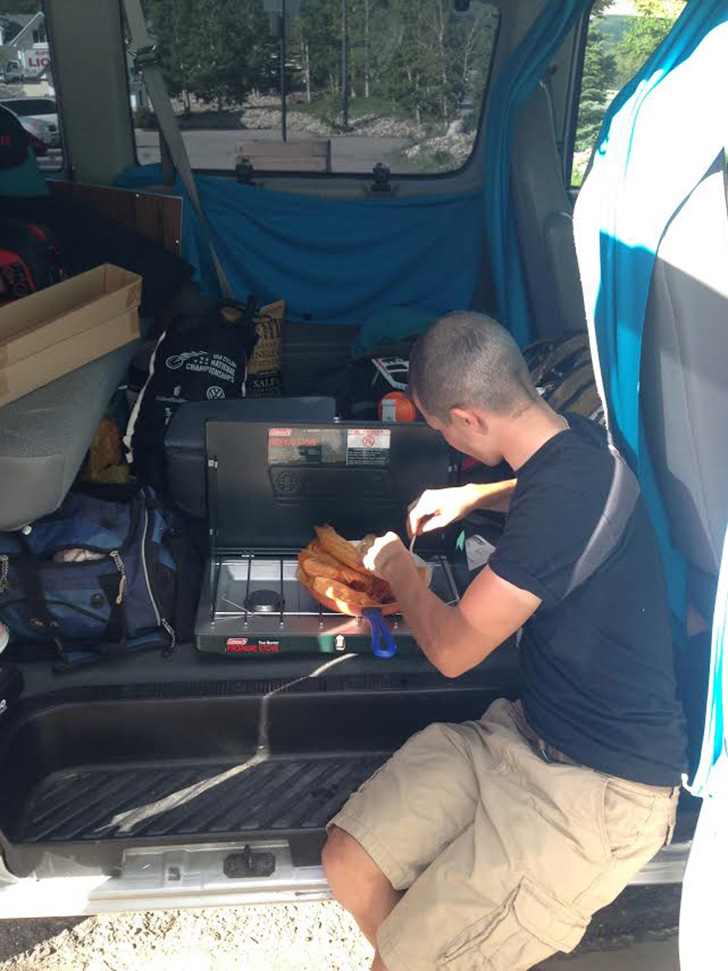 The couple did have some rather exciting things happen to them on the road that are mentioned in the book. Like when the van almost caught on fire and the A/C went out.

Sierra’s passenger door was stuck in a locked position so she always had to climb in and out of the van through the side doors.

“Probably the best experiences were seeing Trevor move up the ranks at each race,” Sierra concluded. “That was the whole goal of the trip, after all. Then, there were the small things, like treating ourselves to a real meal at Chipotle after a long and grueling day of filming. Or getting to explore these tiny little towns that are so far off the map they hardly ever see outsiders. We got to witness spectacular lightning storms, sunsets, and gorgeous country that you can only appreciate when you travel by road.” 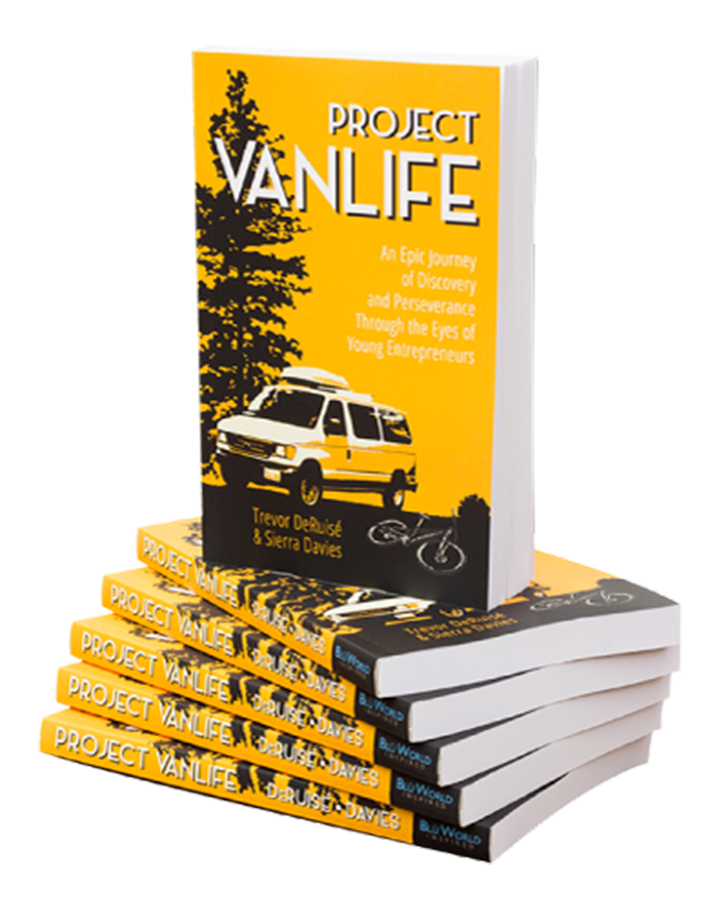