Many fifth wheel designs call for a set of 1-2 step RV stairs leading up to the main bedroom area. For all the use they get, they certainly aren’t the most well-built part of the RV for most owners. They tend to wear, squeak,  and wobble soon after they roll off the lot. For folks with short legs it can be a challenge hoofing it up those tall stairs. Not to mention stairs in general tend to waste valuable RV storage space which of course is never a good idea in your mobile mansion.

The Saby family from British Columbia decided they had enough of their squeaky and wobbly RV stairs. They decided to tear them out and replace them with a better built version that they could also gain access to the storage opportunity below them. 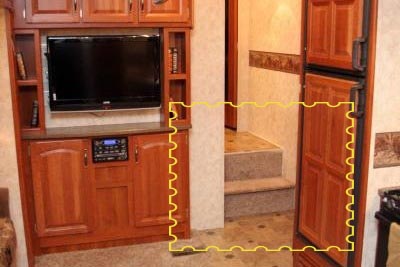 When they started to take them apart it was clear that the poor workmanship was the root of the issue. They found only a few screws and some pieces of plywood that made up the RV stairs. 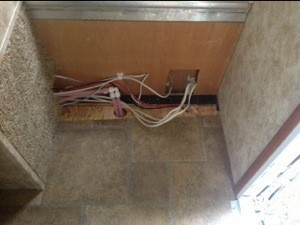 Once the stairs were out they found some plumbing and electrical lurking under them which unfortunately was going to use up at least a portion of the storage space they intended to built into the new RV stairs. 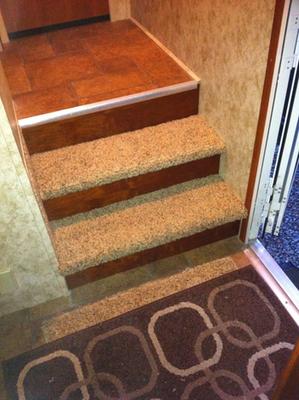 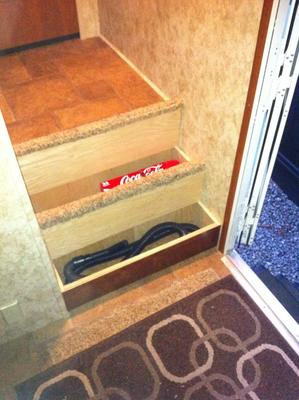 The idea for the design was to make 2 steps instead of 1, stop the squeaking, build them to last, and squeeze in some extra storage compartments. After some work with 3/4” plywood and some cherry wood paneling they were left with the design below. They reused the same carpet only adding some underlay for comfort. Then after setting the hinges they had a new set of stairs that offered some much needed accessibility and functionality. Finally a place to store the Coca-Cola!

You can see more photos and information on their RV stairs mod at the Saby Family Blog.