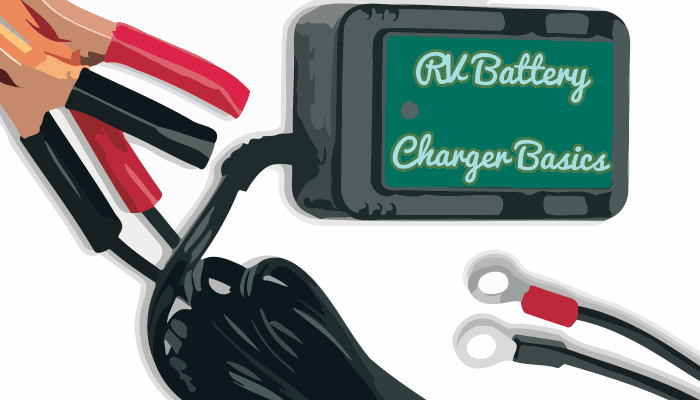 Most RVs come with a built-in battery charging system, but many are poor performers or are designed primarily to top up a battery while plugged in at an RV park.

All too often, especially in older RVs, they may actually damage batteries by over-charging them, or leave you without power because they under-charged.

More recent RV battery charger models have improved quite a bit, but you may still want to upgrade yours, or have an alternate charger on hand for certain needs.

Today I will explain about the various types of RV battery charger and alternative methods of keeping your batteries charged up. 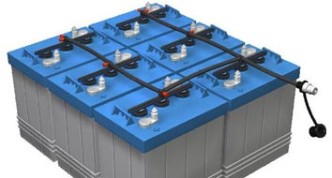 The basic RV charging system is called a Converter-Charger.

Its primary function is to convert 120v shore power to 12V DC power so that your battery does not need to provide DC while you are plugged in.

Its secondary function is to charge the battery(s) when and if it has excess capacity.

It is rated in Amps, e.g. it can produce 55 amps of DC, which will supply the RVs lighting and appliance circuit boards with power and probably have enough to do some charging as well.

The RV battery charger function can be Single Stage or Multi-stage – more on this shortly. RV battery Converter-chargers are often combined with the main power distribution panel in the RV, providing both 12v and 12v functions in one unit.

Modern Class A motorhomes (and some others) will have an Inverter-Charger. It performs the same functions as a RV battery Converter-Charger but adds the capability to produce 120vac from the battery 12V when shore power is not available.

Batteries are not sponges – they don’t just soak up amps. The amps have to be pushed in by applying a voltage higher than the battery voltage.

RV Batteries work the same way – they “push back” as they begin to fill with amp-hours. This results in a natural “taper charge” when a fixed voltage is applied.

Initially a lot of amps flow, but the rate decreases as the battery’s stored amp-hours increases and the battery voltage climbs. This fixed voltage, tapering amperage method is called Single Stage charging and it is common in most low and mid-range trailer and smaller motorhome battery chargers.

Multi-stage charging is a more sophisticated method that optimizes charging based on the battery state of charge. Typically there are three stages, called Bulk, Absorption and Float.

Bulk charging is used to quickly take the battery from a very low charge up to about 60-80% charge. The RV battery charger does this by applying voltage as needed to keep the charge current at about 25% of the battery amp capacity.

As the battery pushes back, the RV battery charger increases voltage to keep the amps constant, pushing as many amps as possible into the battery. At a predetermined level (which varies by charger make and model), it switches over to Absorption Stage.

In this stage, the RV batter charger maintains a constant voltage (usually 14.1v – 14.8v) and lets the battery absorb as much current as it is willing to accept (sometimes called acceptance charging instead of absorption). This stage is very much like the taper charge of a Single Stage charger.

Once the battery appears to be fully charged (indicated by a low amp rate), the charger switches to Float mode, where it maintains a voltage of about 13.6. This is adequate to keep the battery at the 100% charge level.

A three stage RV battery charger is far superior to the single stage type. It is both faster charging when the battery is low and healthier for the battery as it nears full charge. The Float mode also keeps the battery safe at 100% charge almost indefinitely.

There are many multi-stage RV battery charger options available today. A popular multi-stage Converter-Charger is the Progressive Dynamics 9200 series, which is available with amp outputs from 45 to 80 amps. Iota is another well known brand. Among inverter-chargers, well-known brands include Magnum and Xantrex.