So, you want to start dry camping? or perhaps just feel more comfortable “off the grid”?

That doesn’t mean you have to give up your TV, microwave oven, hair dryer, or some of your other 120 VAC (traditional items you plug into a wall socket) equipment.

You could of course buy a generator to power your gear, or even just to keep your batteries charged. 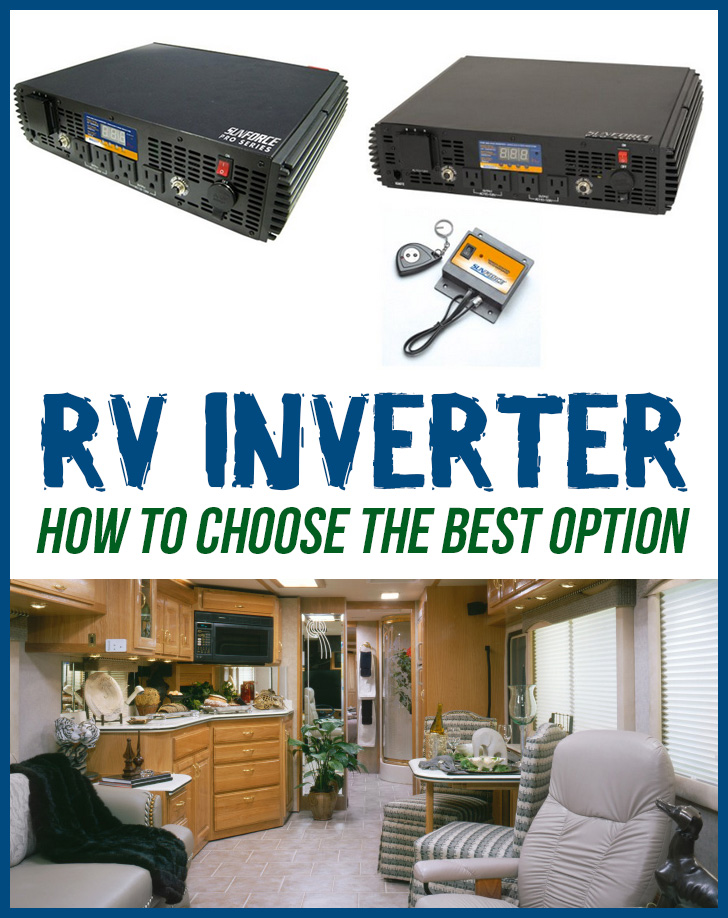 However, there are often limitations on how long you can run one and the expense of doing so. You might consider installing an RV inverter to compliment your power system.

What Is an Inverter Anyways?

Virtually every RV comes equipped with a converter.

Not to be confused with the “RV inverter”, the RV converter as the name implies, converts 120 VAC electricity into 12 VDC(think 12V cigarette lighter receptacle).

It charges your batteries and powers your lights, water pump, and all the rest of your 12 volt equipment.

The RV’s inverter does just the opposite. It converts 12 VDC from your battery into 120 VAC, standard household type electricity.

Before you buy your RV inverter, you need to decide what kind is most appropriate for you. Inverters come in two flavors and in a wide variety of sizes.

The first  flavor utilizes a modified sine wave (MSW) output. The other has a true sine wave (TSW) output. Which one you need will depend on what equipment you will want to run off your RV inverter.

The output of the TSW inverter is indistinguishable from normal household current and, if sufficiently large, will run anything you connect to it. The down side, is that they (especially the big ones) get rather pricy in comparison.

Not all Modified Sine Wave (MSW) inverters are created equal. A true sine wave is illustrated above (red line). Also shown are two different modified sine waves (blue and green). The modified (blue line) wave is much closer to the true sine wave (red line), and is less likely to cause problems with your electrical powered items.

For anyone not formally trained in electrical engineering it may be simpler to know that a traditional power grid, like the one you enjoy when you plug in at a hotel or at your sticks and bricks house, would look like the red line.

If you choose to purchase a MSW (blue or green line) RV inverter, the output you receive could cause intermittent issues with your sensitive electronics such as televisions and computers as described below.

The trade off, as with anything, is cost. TSW inverters tend to be significantly more expensive than their MSW counterparts .

6 thoughts on “RV Inverter: How to Choose the Best Option”