This introductory guide is written for the RV solar power beginner. You'll learn about the main components of an RV solar power system.
621
SHARES
123165
VIEWS
ShareTweet

Below is a run down of the basic components of an RV solar power system.

You may have heard that there are three types of solar panels, categorized by how each individual cell on the solar panel is constructed.

The three types are:

Most of the trickle chargers we talked about earlier are made of amorphous cells. Amorphous cells are the cheapest of the three types, and are better at collecting power from the sun on cloudy days. But they’re not as efficient at collecting energy as the mono and poly cells.

Most solar panels made for powering and charging – as opposed to trickle charging (maintaining charge) – are made of either mono or poly cells.

The 320 watt Go Power! kit above, for example, is made of monocrystalline cells.

While the actual solar panel cells are monocrystalline, polycrystalline or amorphous, the entire panel can be either rigid or flexible.

The mono and poly cells are usually part of rigid frames, while the less efficient amorphous cells can be molded into flexible panels that can bend up to about 30 degrees.

Another manufacturer, Renogy, also has their own flexible mono cell panel on the market.

These flexible mono panels are a bit more expensive than their rigid counterparts, however. 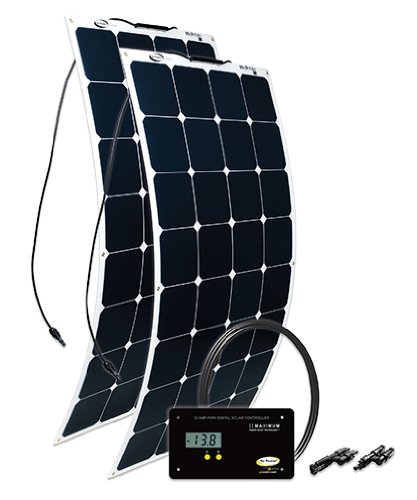 The charge controller, sometimes called a charge regulator, is the command center for your RV solar system.

It regulates the power (both current and voltage) coming from the solar panels to prevent your batteries from becoming overcharged. The solar powered trickle chargers we talked about earlier generally don’t come (or need) a charge controller.

And interesting fact about solar panels is that while they’re usually rated at 12 V, they often put out about 16-20 V.

You might wonder why the panels put out more voltage than the batteries they’re charging are rated for.

The answer is that if the panels were designed to only output 12 V, they wouldn’t produce nearly enough power during less than perfect conditions and full sun. So the engineers design the panels to output more voltage than rated during optimal conditions, so that when the clouds come in or the panel heats up (solar panels work better when they’re cool) you’ll still be able to get 12 V out of them.

What Is Maximum Power Point Tracking?

An MPPT controller is an electronic DC to DC converter that converts the higher DC output from the solar panels to a lower DC voltage needed to charge your RV’s batteries.

If you use a regular charge controller, you’ll lose a lot of power if there is a poor match between the output on the solar panel and the current charge on your battery.

You should consider an MPPT charge controller if you’re serious about building a quality RV solar setup.

The ability to monitor your RV solar system varies widely with the quality and cost of the setup. Some systems use indicator lights, others simply list the voltage.

By using a digital monitoring unit, such as the Xantrex CM/R-50, you’ll be able to read the volts, amps, and cumulative amp hours of your solar array.

Wiring is the backbone of your RV solar system. Just don’t get tricked though, as there’s no special wire made exclusively for solar panels.

Read this informative guide to learn what type of wiring to use with your solar power setup.

It goes without saying that mounting your RV solar panels should be done with the highest quality hardware so that they are absolutely secure.

You can mount your panels either flat or on some tilt brackets.

Some RVers believe that tilt brackets can be troublesome. If you mount your panels permanently, be sure to consider the loss of efficiency if the panels don’t face directly toward the sun.

This RV solar guide is meant for the solar power beginner. While we’ve introduced the basic components and talked a little about how they work with each other, you’ll want to do more research before you make your final purchase decision.

If you want to continue your research we encourage you to visit the links below to learn more.

Where to find RV solar panels, controllers, parts and accessories: