Few of us have the luxury of going totally offline while we’re RVing around the country, including me. I work online and need reliable Internet to make money on the road, but limiting my travels to cellular broadband coverage seems to defeat the purpose of spontaneous adventure.

This is why we installed the RVDataSat 840 on the roof of our RV. This satellite Internet dish, networking hardware and a little gadget attached to the router allow my husband and I to do business from anywhere.

With Internet service satellite VoIP (Voice over Internet Protocol) from Mobil Satellite Technologies, we go where we want, not where Verizon or AT&T has a tower.

We roam where we please with satellite Internet.

Mobile satellite Internet service for RVers will get you online anywhere, and the new RVDataSat 840 makes it faster and better than ever. Go wherever your heart desires and when you pull over, just deploy the rooftop mounted dish with one click.

The RVDataSat 840 automatically locates your assigned satellite signal in minutes. My previous article discusses the system in detail but in short MobilSat offers:

This hardware lets you make calls over satellite Internet.

Before we move on, let’s get one thing clear: the RV DataSat840 is a considerable investment. But if you need to be online and don’t want to tether your RVing lifestyle to cell phone coverage maps, it’s absolutely worth the $5,995 price. We’ve had our system for over a year and have never been disappointed. And now with the addition of VoIP, it’s given us absolute freedom to roam without limits.

Satellite internet has always allowed you to get online in the remotest of locations, but making phone calls was an epic failure without cell phone service. The slow speeds of previous mobile satellite Internet systems just weren’t conducive to Skype or Internet-based phone calls. Thankfully that’s changed with MobilSat’s new RVDataSat 840 and satellite VoIP.

Unlike the pay-as-you-go broadband plans offered with MobilSat’s RVDataSat 840 system, the company’s add-on VoIP service requires a 1 year contract (at $24.95 a month). The year-long commitment is required by the National Number Pool Administration, a government entity that doles out phone numbers to telecom providers. The price tag for this service isn’t cheap, but like the service itself, it’s priceless if you value your RVing independence.

The MobilSat satellite VoIP system is a game changer for full-timers like us who like roaming wherever we please. Since last fall we’ve used it in remote locations throughout the Southwestern United States and it’s always worked like a charm.

Our business endeavors never suffered because of where we chose to camp. We can make phone calls and live life as we normally do, only from places that most RVers never get to enjoy because they can’t be offline if they want to earn a living.

The system works beautifully with MediaFone or Zoiper Apps. 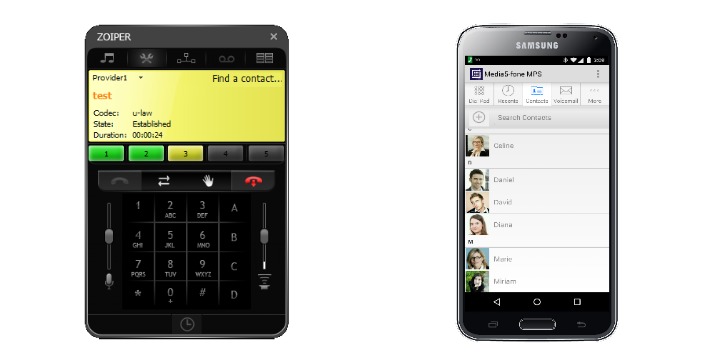 And it works just as well with this old school telephone we got for $1 at a thrift store.

Satellite VoIP has been a vital part of keeping our income streaming in so that we can enjoy the full-time RVing lifestyle. More importantly, on more than one occasion it enabled us to make phone calls during emergency health situations. All this, from the middle of nowhere.

But satellite Internet and VoIP are not just for working from remote locations. They are also useful for mission critical connectivity. Redundancy is key when local WiFi or regional wireless networks go down.

With the RVDataSat 840, you will always have a way to get online and make phone calls.

I’ll be honest, mobile satellite Internet and satellite VOIP isn’t for everybody. Technical skills and a bit of networking knowledge are certainly helpful. Cost is also a big concern. But if you really cherish the ability to camp and work from anywhere without being tied to cell tower broadband Internet coverage, it’s a cost-of-lifestyle choice that’s well worth the investment.