Jarrett and Chelsea of OurSonnyLife have a special story to tell about losing their son Trek to a rare genetic disease when Trek was only 14 months old.

After their son’s death, they decided to renovate a motorhome and do a lot of traveling with their other children.

Chelsea let us share some of her photos and experiences in spray painting the interior of her family’s motorhome.

Here’s an outline of what Chelsea did to make the inside of her thirty year old motorhome look better than the original.

How to Get Started Spray Painting the Interior of Your RV

She said that they had a hard time finding good information on spray painting the inside of an RV, so they set out on a do-it-yourself mission.

Not knowing any special tips and tricks, Chelsea and her kids started to paint the old-fashioned way: with a brush and some primer.

But brush lines were obvious on the cabinets and walls and the paint didn’t stick to the finished cabinet wood, so she decided to try spray painting.

Preparation is Everything: Taping All the Surfaces

If you decide to spray paint instead of using a brush, taping off the surfaces you don’t want paint to get on is super important.

Painter’s tape is a special type of masking tape that produces clean edges when paint is applied over the seam. If you use regular masking tape instead of painter’s tape you’ll get fuzzy edges and a less-than-desirable outcome.

Problem is: painter’s tape is pricey.

You can save money by using newspaper and trash bags to cover most surfaces, and just use painter’s tape for the critical areas that will be easily seen.

Taping off an RV prior to painting can be a bear of a job.

It’s a lot different than just taping some trim work in a full-size house.

Did you know this about painter’s tape?

House painter’s tape is rated by how many days it can be left up without leaving residue on the surface being masked. It is available in 1, 3, 7, 14, 30, and 60-day ratings, with the 7- and 14-day tapes being the most common.

The longer-rated tapes are typically less adhesive, and are sold for use on smooth, delicate surfaces such as vinyl wallpaper and recently painted walls. In any case, the tape should be removed immediately after painting regardless of how long it was left up beforehand.

Painter’s (Decorator’s)tape in the U.S is most often the blue variety or sometimes purple in color as opposed to the tan or off white household masking tape. Spraying WD-40 is a popular way to remove any sticky residue.

Using garbage bags for large surfaces saves on cost. Try to limit the amount of painter’s tape you use – it will get expensive quickly.

Tape will only do so much, and you can always go back and touch up. Wrap the garbage bags around desired paint boundaries for the most protection.

The wood paneling around the cab-over bed proved too difficult to paint with the spray gun. Chelsea went back over this area with a brush.

You might consider segregating the entire cab portion of the motorhome from the rear living space. A spray gun will turn the paint into a fine mist that will stain all surfaces that aren’t covered up.

It’s better to go overboard on the taping and bagging rather than have to clean paint off surfaces you didn’t want touched.

Which Spray Gun to Use?

Chelsea decided on a Wagner power sprayer after talking with a sales reps at Lowe’s and doing some more of her own research.

At first she looked to save money and bought the cheapest model for $69 but it ended up getting clogged after only a day.

Frustrated with spending hours cleaning it, she went back and got a more capable model similar to this one.

She went back and primed everything first with a dedicated priming product. This helps the paint stick to the finished wood cabinets and paneling.

With music blaring and a rag tied around her head, Chelsea set out transforming the interior of her motorhome. 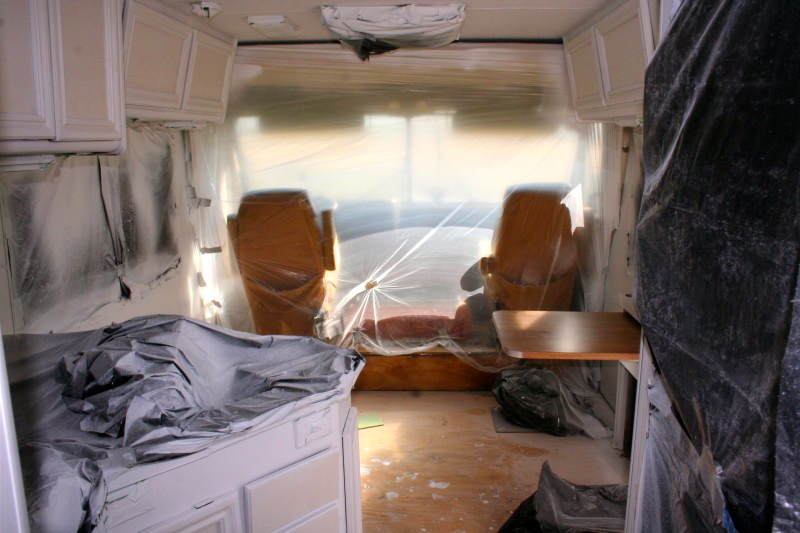 Here’s what Chelsea had to say about painting the pull-out table,

This table was a little tricky. It needed to be out to paint on one side, but it also needed to be painted on the other side which was only possible with it closed up. So I had to wait and alternate sides as it dried.

Chelsea said that it’s important to wear a mask and open as many windows as possible. The fumes from spray painting in enclosed areas can easily overwhelm you.

Be prepared though, because even if you do those things, she said you might end up like this after a painting session:

When you remove the painter’s tape you’ll probably pull up some paint with it.

But don’t worry, you can always go back with a brush and finish off those areas.

Chelsea wanted to paint the refrigerator and taped it off the same as the other surfaces.

The light-colored paint made a dramatic difference in the feel of the motorhome’s interior.

Here is a picture of the rear of the motorhome.

Chelsea said about painting the ceiling,

I also forgot to mention, that the ceiling of the RV was made of some vinyl type material. I taped it off at first, and then noticed it looked yellow against the white walls. So I ended up spraying the ceiling white also. It adhered perfectly and looked awesome.

You can find more pictures on Chelsea’s site OurSonnyLife.

Thanks Chelsea for letting us share your great work.