Dave Moult is the very essence of “Do It Yourself RV” having designed and built six teardrop campers himself. However, these aren’t just any campers. Dave is an artist, and each one is an artistic creation as well as a functional RV.

Several of Dave Moult’s teardrop trailers recently gathered together for a reunion rally. 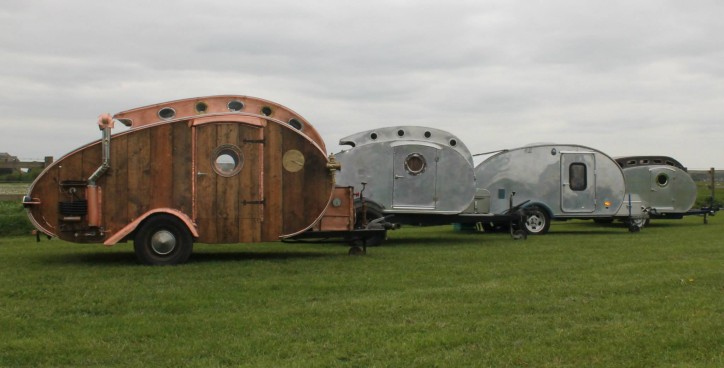 Dave has worked in the United Kingdom in the building industry most of his adult life. He’s been a carpenter, brick layer, plasterer and a plumber, giving him the perfect skill set to create his teardrop masterpieces. The first one was built with the intention of traveling around Scotland with his teenaged kids at that time, but they still haven’t gotten around to taking that trip, having gotten sidetracked by many others instead.

His first teardrop camper was going to be the only one he built, but once the build project for the first one was underway he realized he really enjoyed the process. He bought a chassis and created the shell from his own design. At that point he realized he could actually repurpose a lot of materials and supplies for his first build from an old RV, including the fridge, sink, 12 V electrical system, and lights.

By the time we were finished we were left with a bare chassis…. and it came to me that I could build another simpler build for our daughter

…which led to their second project, named “The Coppertop.” The Coppertop trailer was the first of Dave’s designs with a trolley top, designed to improve head space inside the trailer and create a unique look not found on many teardrops.

The Coppertop is named for it’s copper accents on the custom designed trolley top. 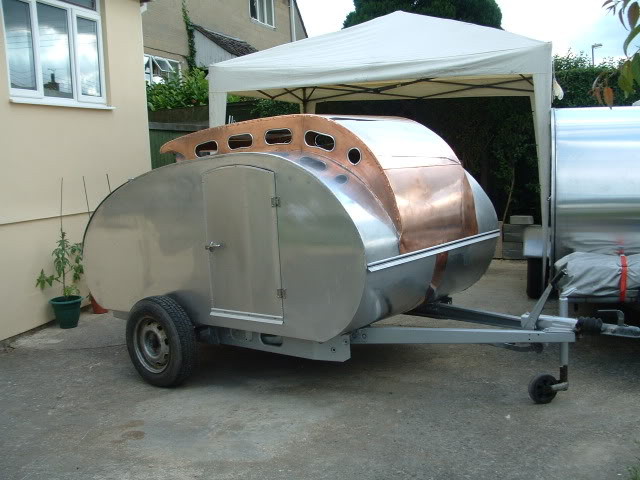 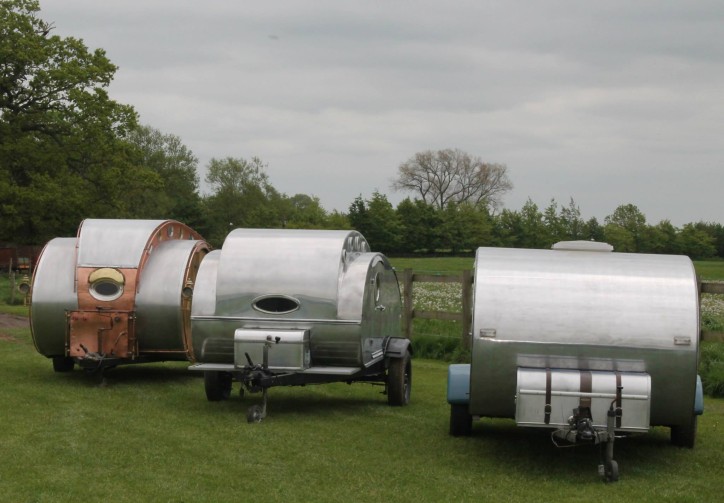 The design for the second trailer was based on a 1947 Cub profile, one of Dave’s favorite vintage teardrop trailers. They were designed to be 10 feet long, but Dave wanted a smaller trailer, so he redesigned it to be 8 feet long. He kept the proportions the same, which dropped the head height to about 40 inches, so he decided to include a trolley top. He added the copper to the trolley top to help the Cub profile stand out.

The third trailer was designed to replace the first one, having learned about the process during the first two builds he was ready to perfect his personal teardrop. He wanted it to be lighter, and have some design improvements.

Dave built the frame from wood with his own design, then added the shiny aluminum, custom fenders, and other unique details. 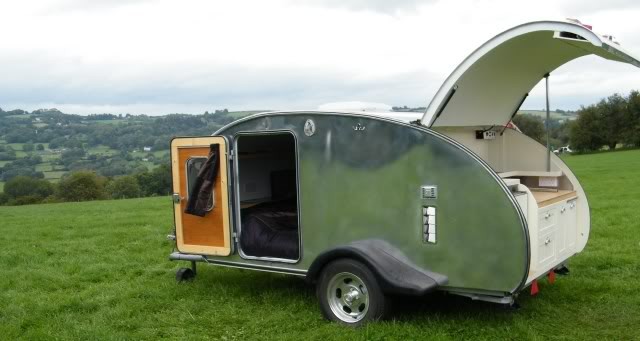 Once it was completed he sold his first trailer, and started work on the fourth one, a trailer he designed and built for his best friend.

Many of his teardrops have a hatchback design that opens to reveal a kitchenette. 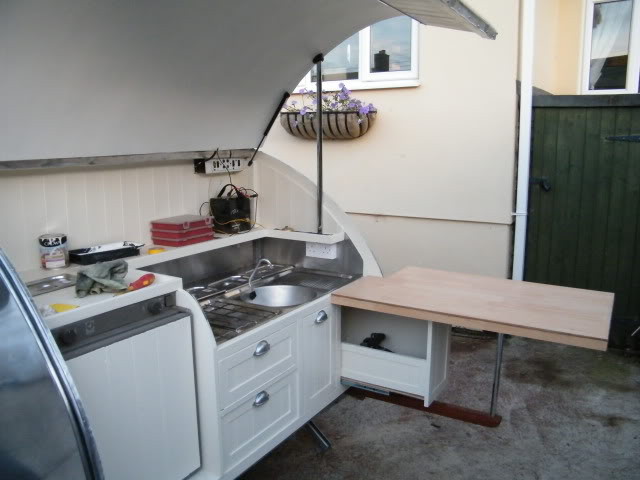 The fourth trailer, nicknamed Wanda, was similar to the second one, with a simple galley and a cozy cabin, although he improved the design of the windows and other small details. 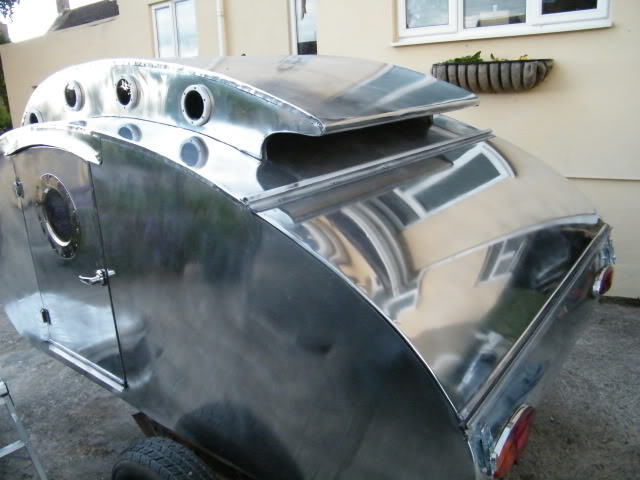 The trolley top design not only looks unique, it adds extra space inside too. 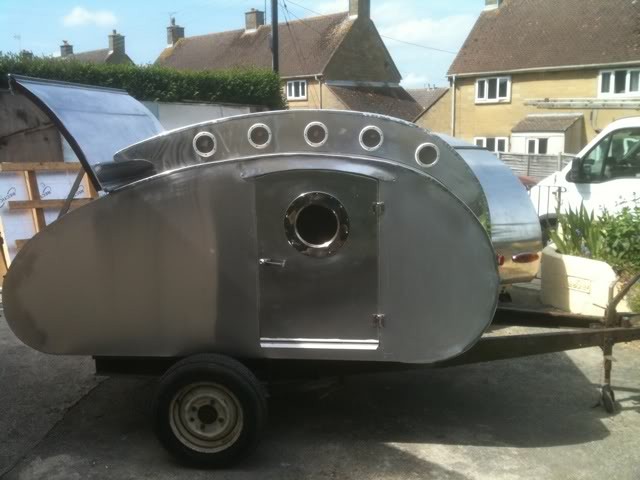 Dave starts each project with plans he finds on the internet, but he then customizes them to suit his artistic vision. Dave explains,

I love the look of the vintage trailers that we just don’t have over here in the UK.

Dave’s artistry shows in the details, like the Celtic artwork on the cabinets, the port-hole windows, and custom trim. 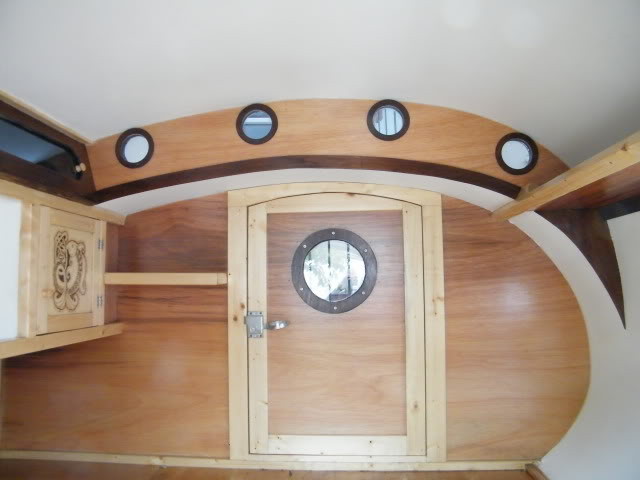 The Celtic design was hand burned into each cabinet. 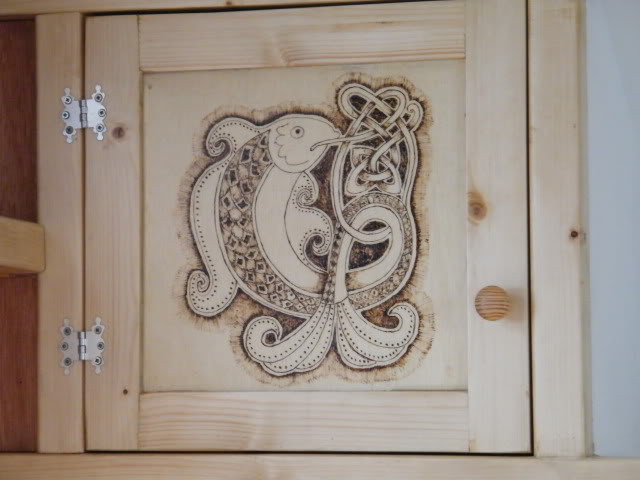 The fish theme from the Celtic artwork inside the cabin is carried over to the kitchenette. The camper’s name “Wanda” cleverly alludes to the fish theme of this camper, after the movie “A Fish Called Wanda.”

The kitchenette area continues the fish theme of the other artwork in this camper. 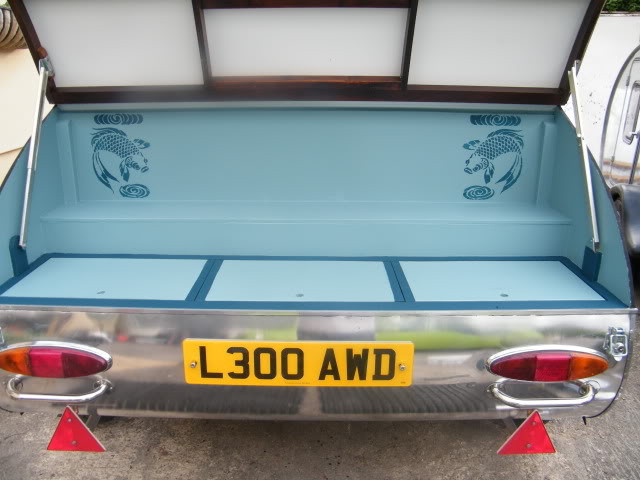 With all of the care and work Dave puts into each trailer, he’s realized that he enjoys the process, but actually hates to part with the trailers. Therefore when it came time to sell the fifth teardrop (named Mambo #5 after an American pop-song), he convinced his brother to purchase it and keep it in the family.

Mambo #5 included shiny aluminum all around, inspired by vintage trailers from the United States. 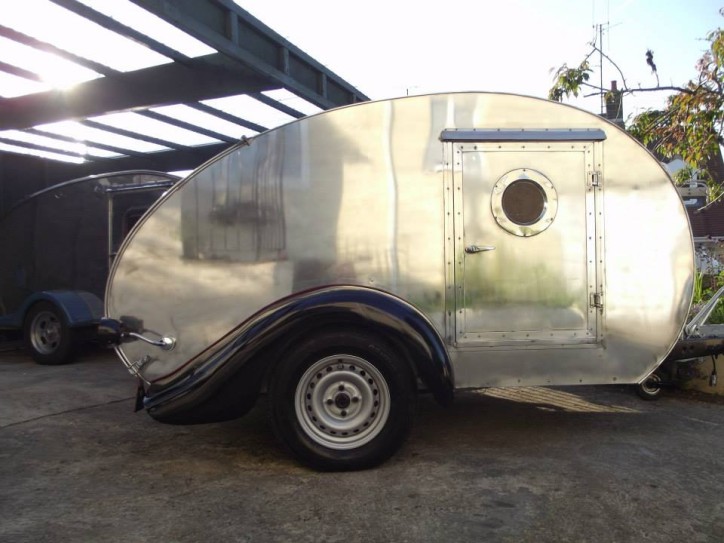 Dave continued his Celtic artwork theme in the fifth build, with custom artwork burned into the cabinet doors in this model as well. 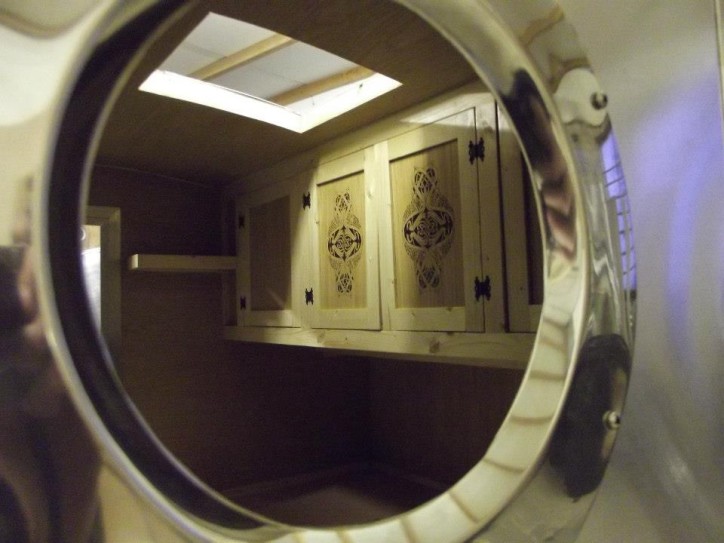 Dave’s most recent build, the Campernarti, has gained some notoriety for its unique steampunk inspired design. It is a full 10 foot sized teardrop with the trolley top Dave favors. Of all of the teardrops, Dave let his imagination run wild with this build, and it is a show stopper everywhere they go.

With an amazing steampunk theme, copper accents, and details galore, Dave let his artistry shine on the Campernarti. 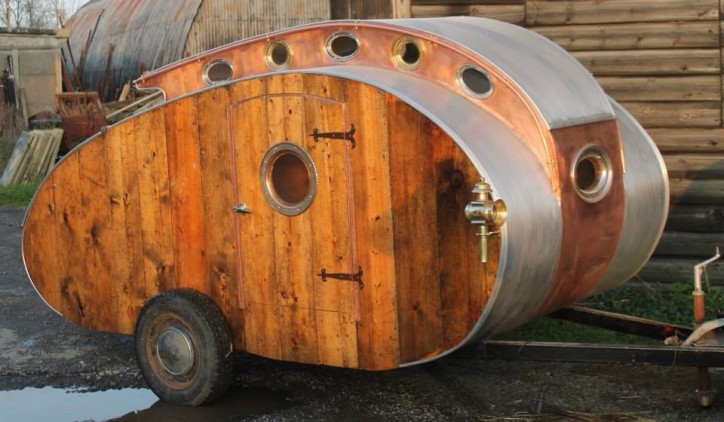 Every detail was carefully planned, including the vintage nature of the kitchenette. 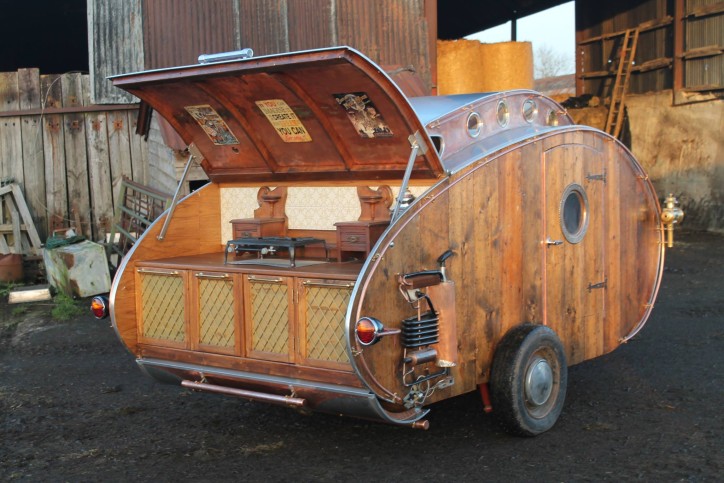 Rich upholstery and curtains, an “octopus” chandelier, mixed-matched portholes, and tons of “steampunk” details in copper and brass make this Dave’s greatest masterpiece yet. 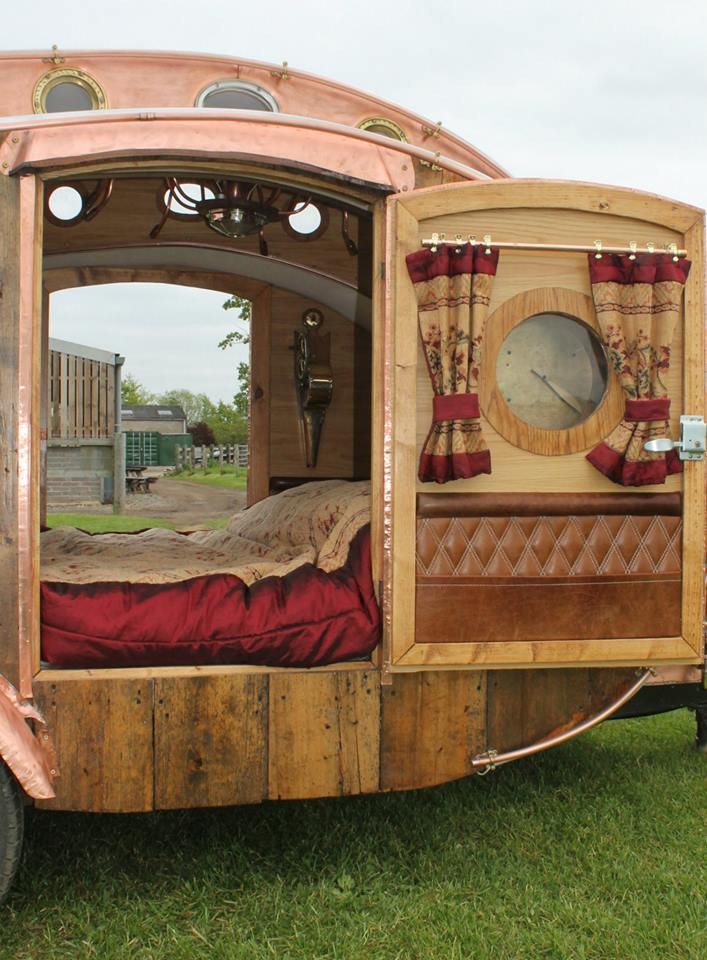 Asked what he has planned next, he mentions a 1966 caravan restoration and another teardrop in the works.

We’ll keep building them so long as we’re having fun. My build list seems to get longer the more we build!

Or, we suspect, until he runs out of friends and family members to purchase them!