Skip to content
Table of Contents show
DIY Camper Was a Practical Decision
More than Just an RV
Obstacles and Outcomes on the DIY Camper Journey
His Advice For You
More Custom Camper Resources
Share this post:

How many times have you spotted a funky homemade RV traveling down the road and wished you could ask the owner how they built it?

The next time you see one, don’t hesitate.

If a homemade camper catches your eye, stop and ask questions because the opportunity probably won’t happen again soon. For example, check out this one-of-a-kind homemade camper on a Freightliner commercial truck chassis. 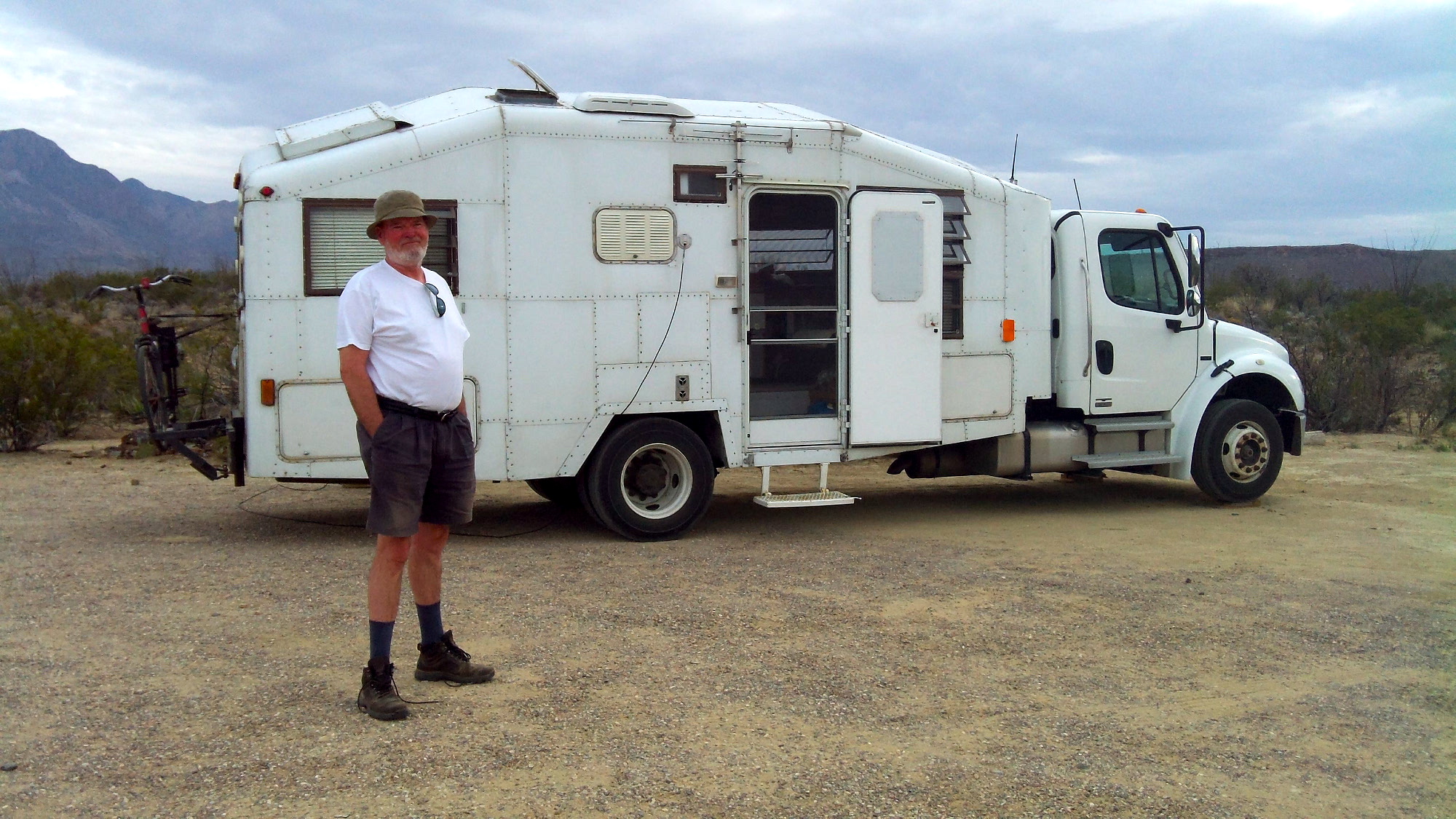 We spotted this DIY camper beauty on a trip to Big Bend National Park and jumped at the chance to ask questions of the owner.

Regrettably I was in such a hurry to talk with him that I neglected to ask his name. I also didn’t know him long enough to feel comfortable asking for a tour of the inside, but I still learned a lot about building a homemade camper.

DIY Camper Was a Practical Decision

This removable truck bed camper was hand-built, piece-by-piece by the skilled hands of a retired Canadian school teacher who snowbirds in the U.S. deserts every winter.

When the idea to build a truck bed camper first occurred to him over 25 years ago, it was simply a matter of practicality.

“If I had to spend a whole lot of money on a camper it wasn’t going to happen,” he said.

Although he was a school teacher by day, during his off-time he used his previous experience in residential home construction to design and fabricate this RV.

“It’s sort of like building a house,” he says, “it’s just a big box. But you have to realize it’s going to bounce down the road for a long time, therefore it has to be really, really rigid and strong.

More than Just an RV

As he drafted plans for the affordable RV of his dreams, he knew he had to make it serve multiple purposes.

For example, if he was going to buy an expensive heavy-duty Freightliner truck, he wanted to get his money’s worth by making the truck serve double-duty as a firewood hauler while he stationery.

The camper had to be easily detachable and “the body had to be very rigid and strong, because it had to be jacked up from every corner to lift it,” he explained. 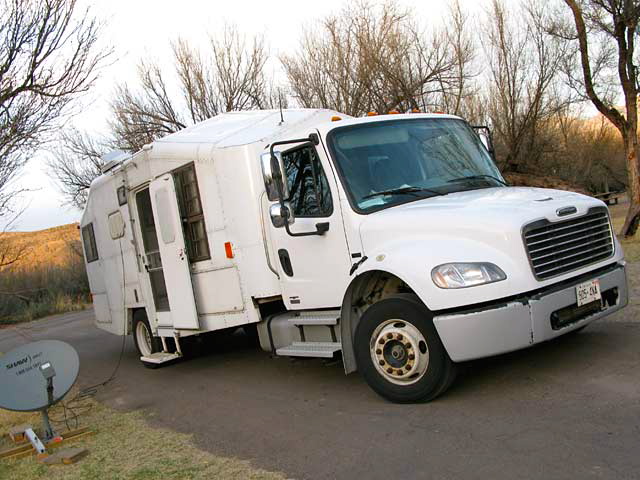 This Freightliner commercial truck is referred to as a business class truck. “There’s not many versions of that particular type of cab, maybe five or six different shapes, some longer, some higher,” he says.

Obstacles and Outcomes on the DIY Camper Journey

The biggest issue he ran into when creating his homemade camper was getting all the parts.

“Many of those parts come from a place called Elkhart Indiana, which is a long day’s drive from my home!” he said.

During his vacations he had to make trips to the states to haul RV parts, piece by piece, until he had enough to begin construction. Meanwhile, he was able to purchase discounted aluminum by a friend who worked in the industry.

Slowly everything started coming together as he began attaching wood, plywood and other normal RV building materials to the frame.

The entire process took about a year until the camper was road-worthy. “It’s not like you can go to the building store and buy RV parts; you have to locate a place to get them,” he explains.

When the camper was complete it ended up weighing about twice as much as a commercially-made model, but he says his solid braking system can more than handle the weight.

Ultimately his dedication resulted in a livable DIY camper that’s solid, durable and comfortable any time of year.

His Advice For You

If you’re thinking about building your own truck camper, this Canadian has some advice: “Spend some time learning how to do something of a similar sort, like building a boat. Or working on a house. Building a boat would probably be the closest thing, because a boat has to withstand similar conditions, strong winds, rain, all those things.”

“It’s not undoable”, he adds with encouragement. “There’s nothing mysterious about it. It’s just a box with household type things inside.”

Want to learn more about building your own truck bed camper?

Check out these DIY truck camper articles and resources: