Skip to content
Table of Contents show
Behold the Taj MaSmall 2.0.
You’ll find reclaimed materials – like copper flashing – throughout the small motorhome.
The drop-down wall of the shower has a beach-glass moon and reclaimed copper flashing. When not in use, the wall folds down for extra counter space.
Here’s the living area featuring reclaimed French doors and thrift store cushions.
This shower curtain rod comes from the frame of an old Papasan chair.
Did you know? Used U-Haul box trucks can be purchased directly from the company.
SEE ALSO: Impressive Box Truck RV Conversion From A 20 Year Old Service Vehicle
NOW WATCH: How To Load A Truck Camper Onto A Pickup Truck In 10 Minutes (By Yourself)
Share this post:

With ingenuity, some dumpster lumber, and the metal frame of a thrift store Papasan chair, Kim was able to turn a U-Haul GMC 3500 10 foot box truck into a luxurious little home on wheels.

The Taj MaSmall 2.0 (as she affectionately calls it) is the second of Kim’s camper builds.

The first Taj MaSmall was a camper she built on a 9×5 foot Big Tex motorcycle trailer. She sold that camper and was able to use the funds to build the Taj 2.0. 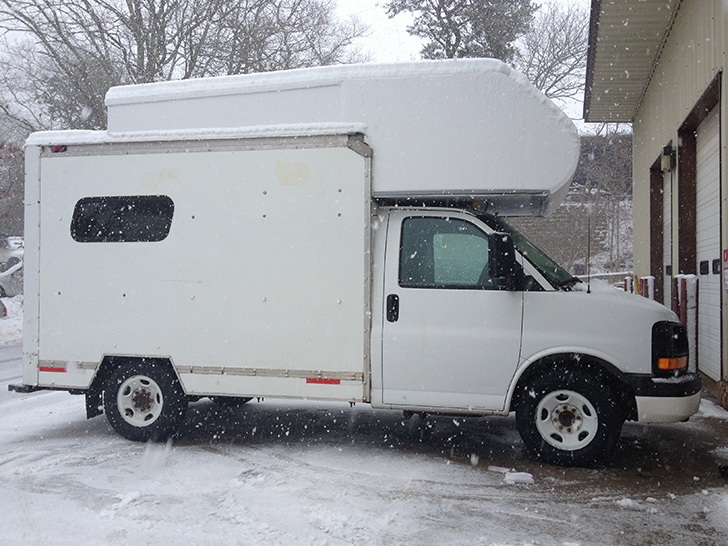 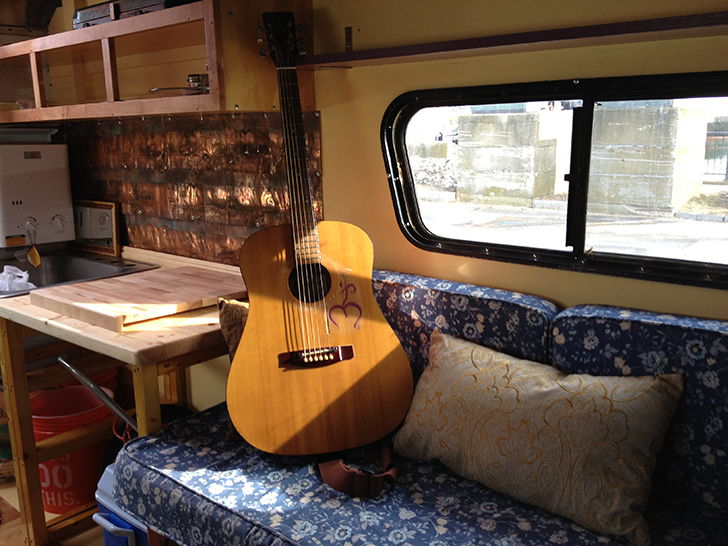 The box truck received a total makeover with a new sleeping loft, rear French doors, a kitchen with a sink and drawers, a hot plate and refrigerator, and an instant hot water heater that runs to both the kitchen faucet and a unique, multi-purpose shower.

The drop-down wall of the shower has a beach-glass moon and reclaimed copper flashing. When not in use, the wall folds down for extra counter space. 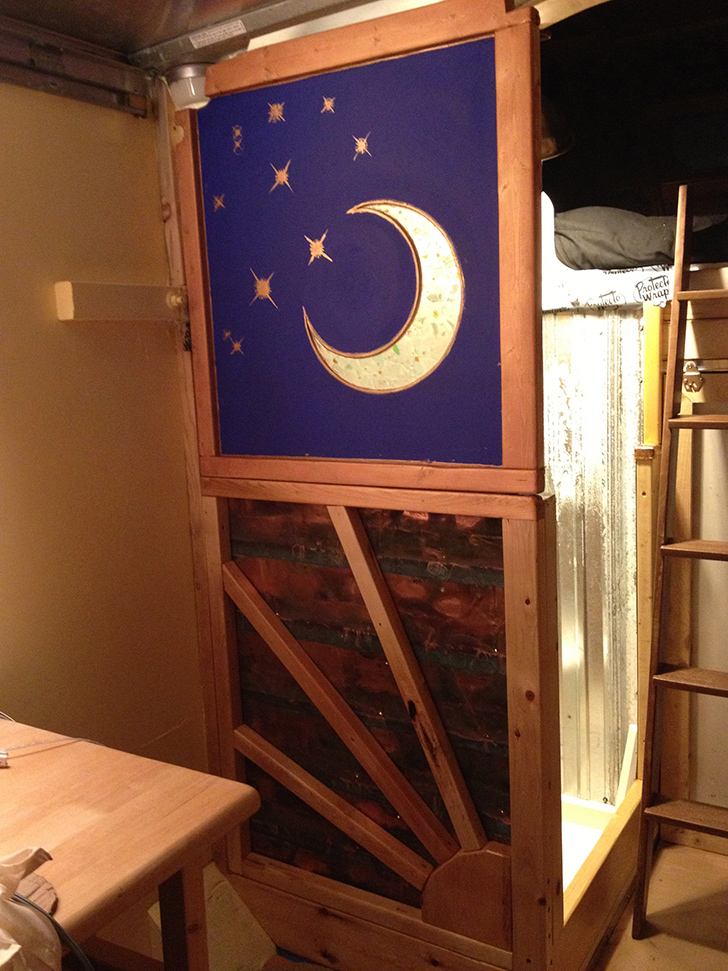 A portable toilet with composting sawdust also lives inside the shower. The attic ceiling is insulated with rigid foam insulation and covered with duct tape and fabric. 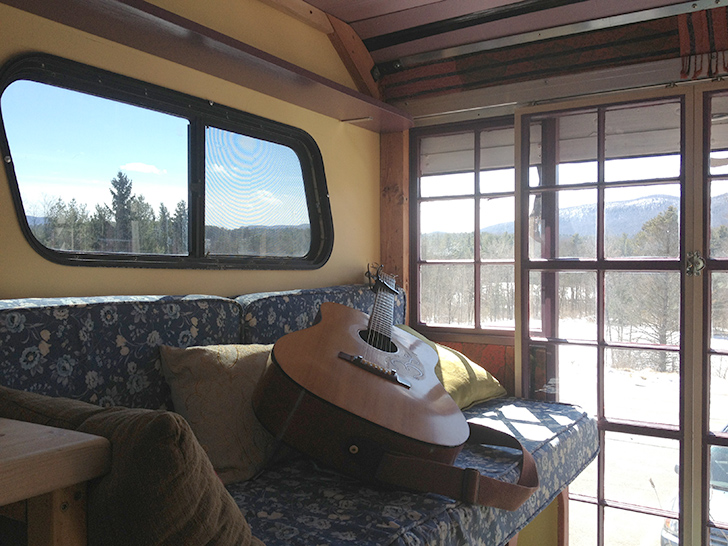 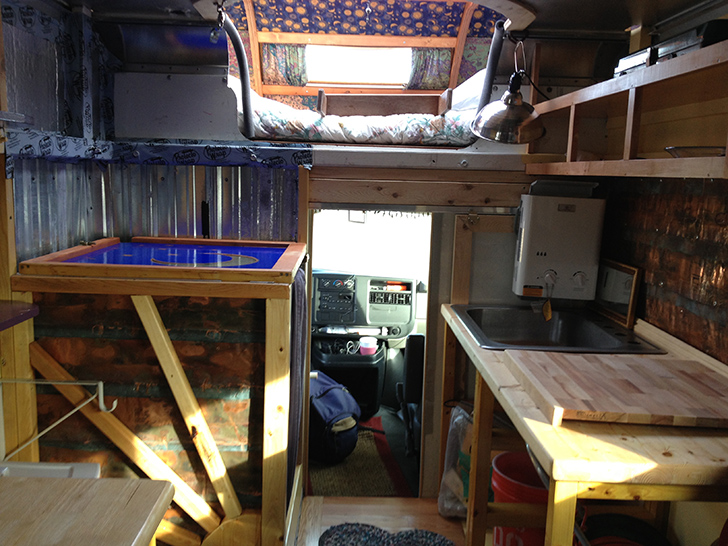 Kim picked up the colorful cushions for the couch/dinette from a thrift store, and the round, metal shower curtain rod is from the frame of a $12 Papasan chair. The French doors and back windows were also reclaimed and the stainless steel sink she got for free from the dump.

This shower curtain rod comes from the frame of an old Papasan chair. 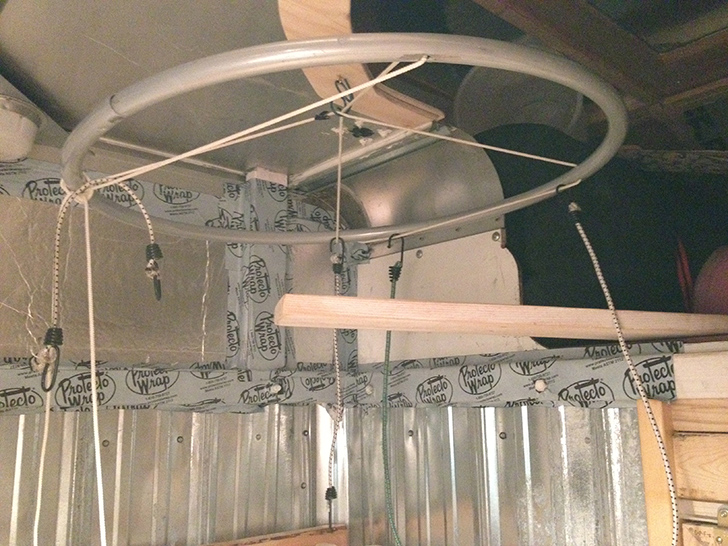 Kim researched various types of vans, shuttle buses, school buses and Sprinter vans before deciding on a used rental UHaul box truck for her Taj MaSmall. The box truck had better gas mileage (around 14 mpg) and cost around $6,000.

Did you know? Used U-Haul box trucks can be purchased directly from the company. 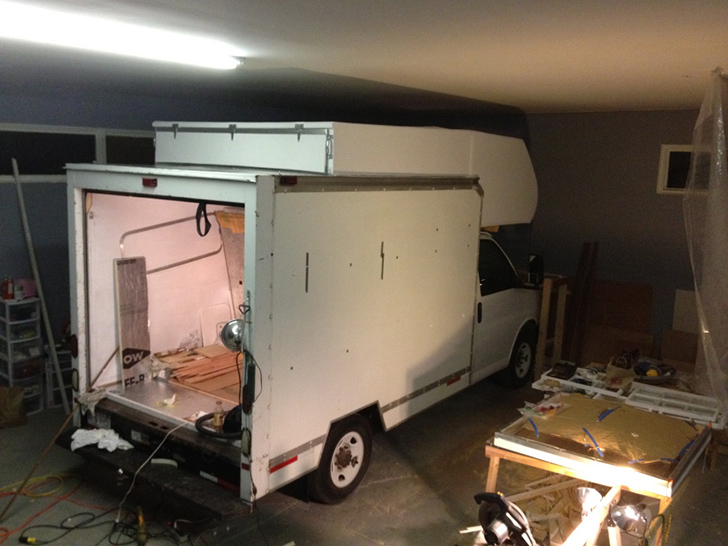 Photos courtesy of My Taj MaSmall

NOW WATCH: How To Load A Truck Camper Onto A Pickup Truck In 10 Minutes (By Yourself)