Skip to content
Table of Contents show
This vintage Airstream Argosy is now a tattoo shop in an Austin food court trailer park.
Rotten wooden floors are often an unseen problem in vintage RVs.
The Airstream was converted into a full tattoo shop, with a sleek modern interior.
Airstream Tattoo created in the Airstream tattoo shop!
Resources:
Share this post:

Austin, Texas has the motto of “Keep Austin Weird,” and also happens to be one of the hottest locations in the country for the food trailer movement. Vintage RVs, most notably vintage Airstreams, are converted into everything from cupcake bakeries and taco stands to mobile barbecue restaurants.

Several food court parks are devoted to the trailers all over town. It was only a matter of time before other businesses took up the idea, and now Austin boasts an Airstream shoe store, a hair salon, several boutiques, and in keeping with their motto – what maybe the “weirdest” Airstream business you can imagine – a tattoo parlor!

This vintage Airstream Argosy is now a tattoo shop in an Austin food court trailer park. 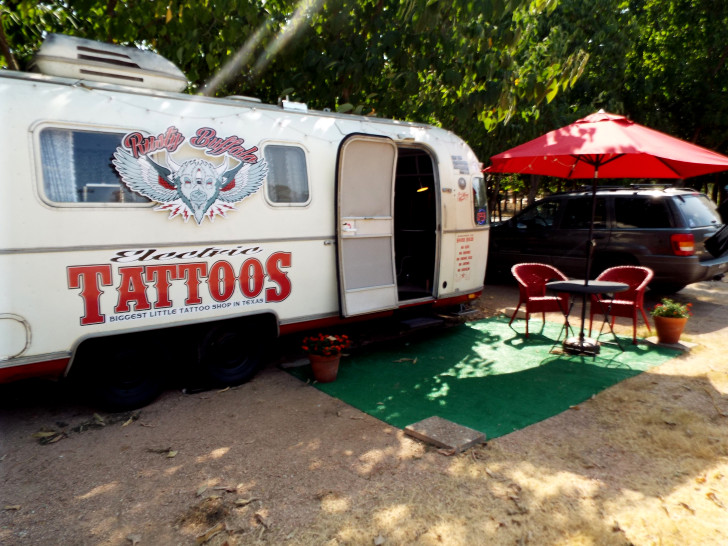 Rusty Buffalo Tattoo Studio is one of the newest businesses to re-purpose a vintage Airstream. When tattoo artist Rusty Meyer and his wife moved to Austin, Texas from Rhode Island, they encountered food trailers and the parks that hosted them for the first time. When he started looking for retail space for his tattoo shop, the rent prices for retail locations in Austin were much higher than anticipated, and that’s when inspiration struck Rusty,

Having lunch with a friend one day I saw an Airstream that was turned into a hair salon. The light went on… Why can’t I turn a trailer into a tattoo shop?

Well with some research and a lot of phone calls I found out it is legal. They say necessity is the mother of invention. Well, I didn’t invent the Airstream but I did need to use it in another way.

He originally bought a different 1965 travel trailer, but quickly realized it was far too small. Plus, it didn’t have the cool-factor of an Airstream, so he switched horses. He first looked at a 33 foot Airstream he found on craigslist, and after driving a few hours to go inspect it found it was in pretty bad shape.

He almost gave up since finding the perfect trailer was going to cost more than he hoped. Then he stumbled upon a 1976 26 foot Airstream Argosy. He found it on Craigslist one night, went to see it the next morning, and felt in love with it right away.

The Argosy appeared to be in good shape upon his initial inspection, but like with many vintage RVs he found unexpected problems when he began his restoration. Although the body was in good condition, with just a few dents, the floor was rotted. Rusty took on the project himself, and carefully gutted the entire trailer. He had to tear out the subfloor and take it all the way down to the frame for repairs. 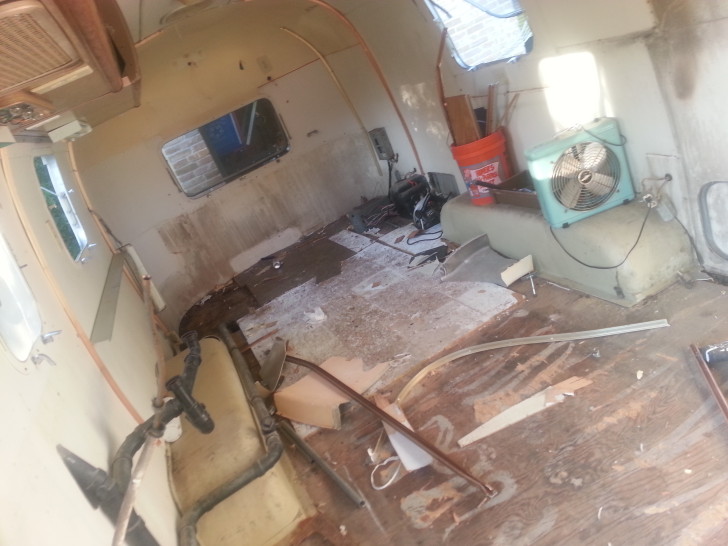 Rusty had worked on houses before and considers himself pretty handy, but he had no idea what he was getting into. Adding a self-contained hot water system was particularly difficult, as were the challenges created by Airstream’s unique shape as he told us,

There is not a square corner in the whole thing so that makes you work a little harder!

Luckily with the help of some YouTube videos and plenty of hard work, within two months he had the restoration complete and the Airstream was a fully functional tattoo shop.

The Airstream was converted into a full tattoo shop, with a sleek modern interior. 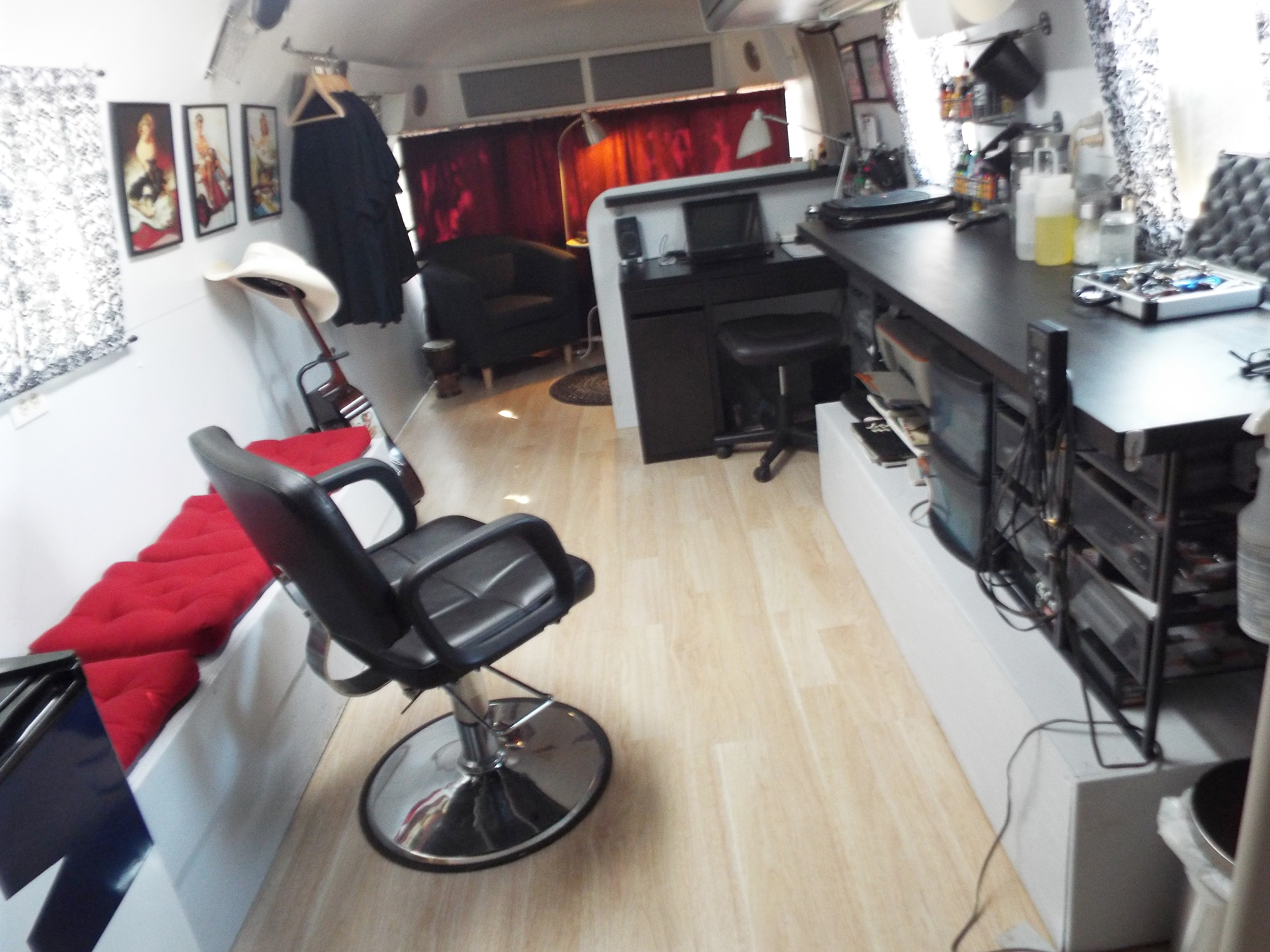 The Airstream business is now located in an Austin food court trailer park, along with a handful of food trucks. The food vendors like having the tattoo shop as a neighbor. Rusty’s clients often have a bite to eat before or after their tattoo sessions, so it’s a win-win all around. 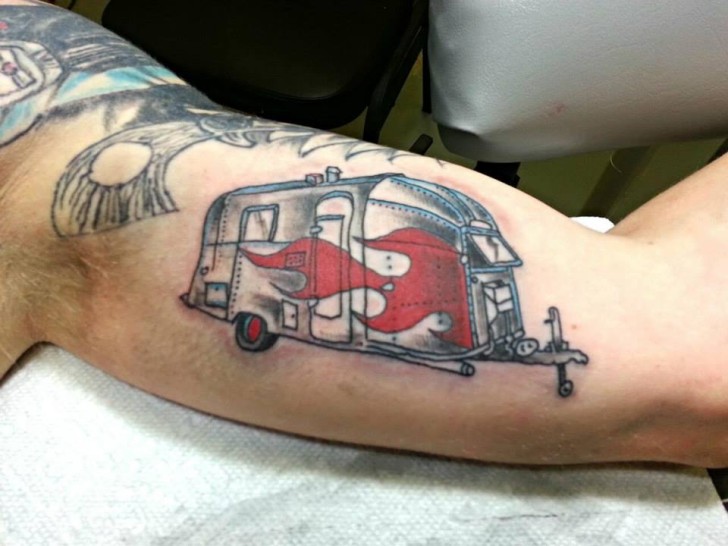 Rusty affectionately refers to the Airstream as the “Biggest Little Tattoo Shop in Austin, Texas.” Whether it’s the biggest or the littlest, it certainly has soul – as do the artistic tattoos Rusty creates in his unique Airstream.