Christine Brown, a homesteader in Longwood, Florida, first saw the vintage Apache Ramada camper languishing in a neighbor’s yard and had an idea to turn it into her new art studio — with a distinctly girly vibe.

Christine, an artist and owner of Barbed Wire Browns, designs and makes jewelry from recycled beads and other objects.

Her young daughters are also creative and helped Christine and her architect husband restore the dilapidated soft sided pop-up trailer into a turquoise art studio that travels to local craft shows. 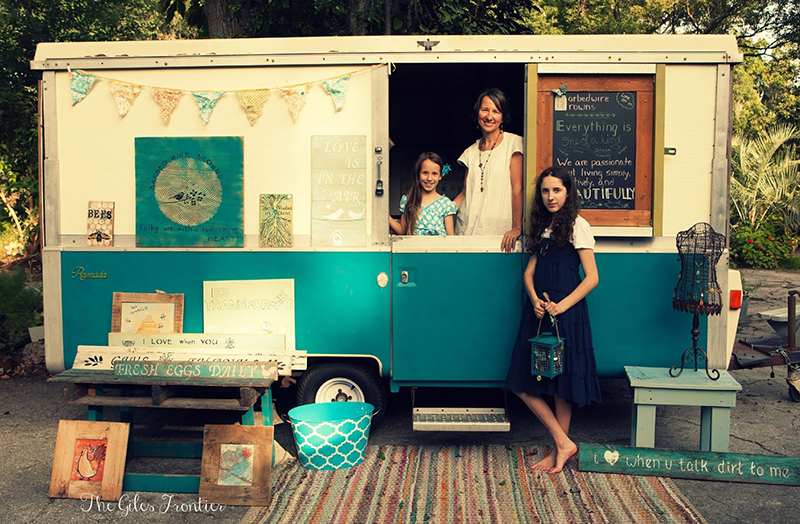 People love to come into our camper and look around.  It’s so fun to share our vision for repurposing and redeeming materials to use to create beauty and this camper is a great example of doing just that!

When Christine and her husband found the trailer in a neighbor’s yard, the soft sides were being removed in favor of fixed walls. The family took over the trailer restoration and used scrap aluminum posts from a screen enclosure to make a rigid frame to hold the roof up.

The interior had already been removed so cement board siding walls were installed with carriage bolts screwed into the aluminum posts. More 2×4 framing was added for rigidity and a place to hang artwork and craft supplies.

The walls were reinforced with scrap aluminum posts and cement siding. 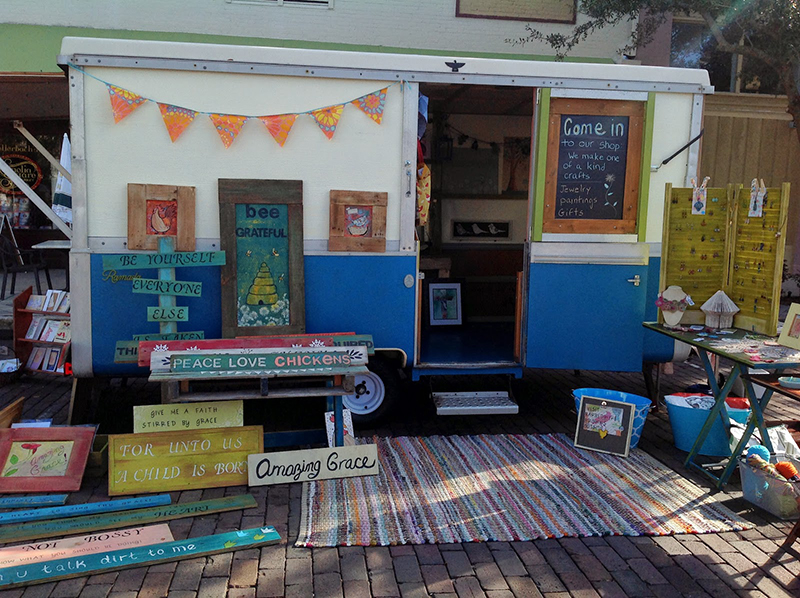 A Dutch style entry door on the side was built with salvaged aluminum from screen enclosures and has a handy chalkboard window.

The interior displays were built with wood pallets and chicken wire. The total cost of the trailer rehab was around $950 and the couple re-used as many items as possible including door hinges.

The interior display boards were built with wood pallets and chicken wire. 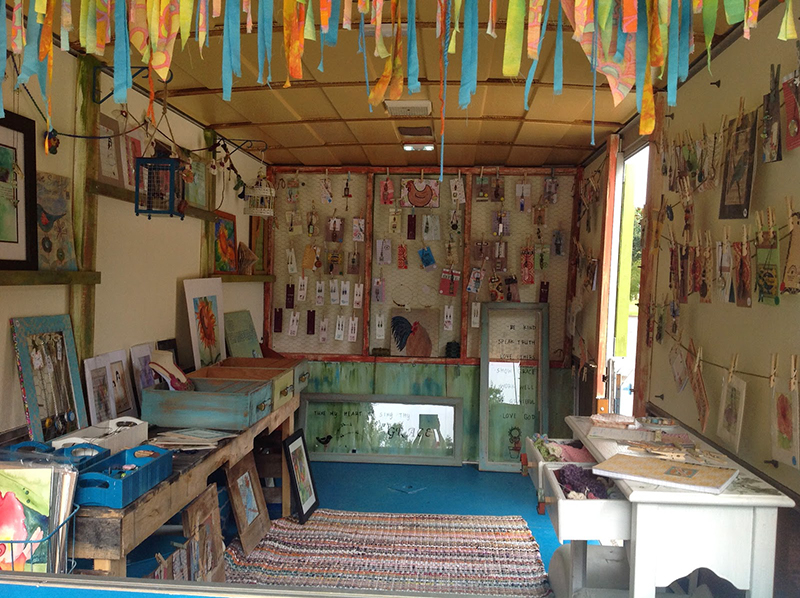 Getting the doors on was a challenge because nothing was square. As an architect I like things to be dimensionally accurate and square and level. Nothing in camper restoration/repurposing is any of those things.

Christine said the trailer works great for craft fairs and shows since it only takes 30 minutes to set up and 15 minutes to break down.

In the past the family had to take a tent and everything was boxed up and this took a lot longer to create a visually appealing booth space. The camper is also wind and rain proof.

The original Apache Ramada trailer was found in a neighbor’s yard. 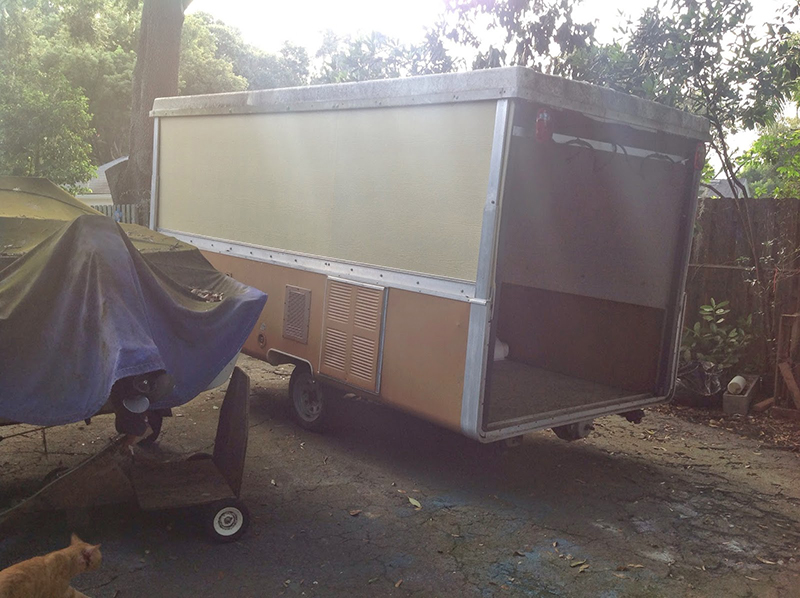 Working on a project like this has many challenges that cause frustration. One funny example is the tire shop could not get the wheel off. We learned later that the bolts used in the past were “reverse” threaded. So my elderly neighbor knew right away what the young guys at the shop had never even heard of.

The Ramada was a soft sided camper with dual pop-out beds, a small kitchen and a patented design exclusive to Apache.

Apache campers today can sometimes sell for more than their original sales price. 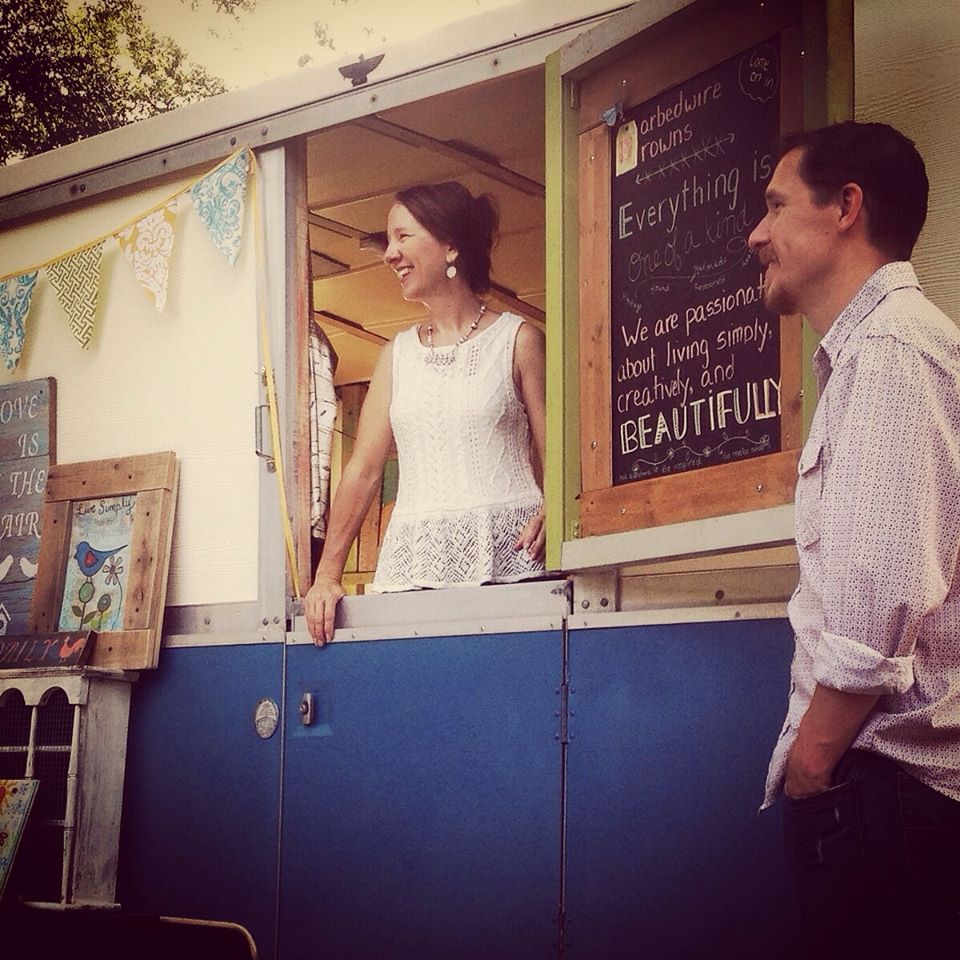