When John Asmus rescued this old farm truck and camper on craigslist, they were both listed as “scrap metal” and destined for the junk yard.

Although they were in rough shape, he felt they had good frames and still had some life left in them.

John runs a small repair shop as a side business, and enjoys restoring vintage campers and automobiles.

This 1959 Yellowstone is his third vintage trailer restoration, and since he’s restored several cars, he felt up to the challenge of fixing the pair of antique vehicles.

John restored both the trailer and the truck, and saved them from an early demise. 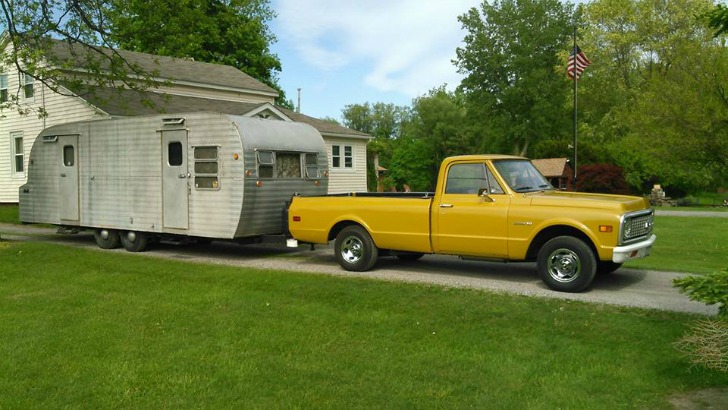 The 1971 Chevy C-10 truck was a bargain at $500, but required several major repairs. The truck box had no floors or structure left and had to be completely replaced, along with the cabin floors.

The doors and fenders had to have patch panels welded in, and the brake system had to be completely rebuilt in addition to replacing the rims. He painted it in the original ochre yellow, and tuned up the transmission and engine, which were both in good condition.

Although repairs were made, he kept the original finish of the camper. 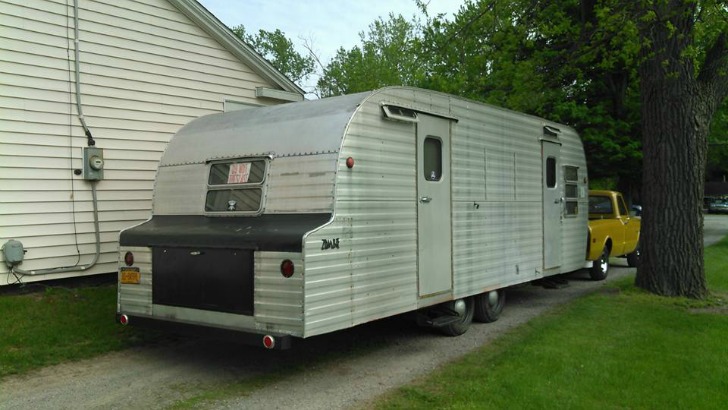 He found the Yellowstone camper around the same time, and purchased it for just $300.

Originally built as a “park model,” the trailer was never meant to be towed as a road vehicle.

It had been purchased new and delivered to a campground, where it spent its life.

The challenge for John was that he did intend to use the trailer as a weekend camper, so he had to design and install water holding tanks, a propane hot water tank, and even tail lights. He also added a weight distribution hitch and sway bar, and rebuilt the trailer brakes to make it safer to tow.

The camper also had water damage in the rear room, and had to be gutted and rebuilt, all the way down to the skin. The water holding tank he built in under the double bed.

Years of squirrel damage required rewiring throughout, and front ceiling panels had to be replaced due to additional water damage.

It was quite an undertaking, and took John a few years to complete. His family takes the Yellowstone trailer camping four to six times a summer, and it tows well with the restored truck. John says it has been a great fit for his family,

The camper gets more attention that we thought it would. We have made many acquaintances at camp grounds with nice people asking about it. I like the faded and worn look that exterior has, and plan to keep it that way.

The truck gets attention too, there are still dents in it from over the years. I purposely kept them in, they add character, and I’m not into car shows! These are far from show quality high dollar restorations. I work two jobs and don’t have the time or money to devote to that stuff, and really not the interest either. These just get used as they were designed to, hopefully for another 50 years!