Skip to content
Table of Contents show
Dyer spent nearly seven months detailing the whole thing.
It reportedly cost Dyer nearly £2,500 to build (or $3,600 in USD). It’s so freaking cool, he’s already been stopped and offered £8,000 for it (or about $11,522 in USD).
He’s usually not surprised when people on the street do a double-take, or want to stop and snap a few photos.
Share this post:

What was on your wishlist when you were a kid?

A bicycle? Or a pony? What about a custom Volkswagen sidecar on a vintage scooter?

Jay Dyer, a father of two in England, made possibly the best gift ever for his son. He built this mini-campervan on a 1961 Lambretta scooter for his 11-year-old to ride in across the country. 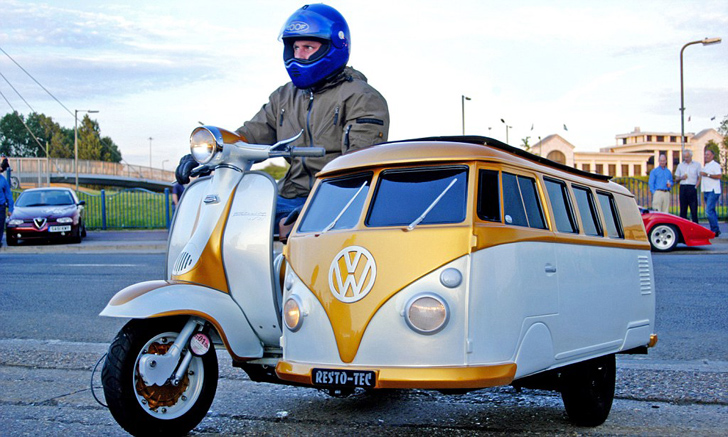 He created it by carefully welding and painting a skin he bought in Belgium.

Because they were going across the country, Dyer paid extra attention to the sidecar’s safety. He ensured the lights on the campervan were completely working before adding it on the Lambretta.

Sadly, it’s not up for sale just yet. You can’t truly put a dollar amount on something quite like this.

He’s usually not surprised when people on the street do a double-take, or want to stop and snap a few photos.

The “Dad Of The Year” explains:

We get absolutely mobbed by people when we take it to shows and journeys can take ages because we’re constantly stopped for photos. No-one has ever seen anything like it and it’s a great feeling to see the look on people’s faces once they realize it’s a miniature camper van. I’ve had scooters for 27 years and see them as an iconic part of British culture, I’m glad to make my contribution.

It would be awesome to see this thing driving down the road, but could you even imagine riding inside? Talk about a unique childhood memory!