This 1961 VW Westphalia Microbus was sitting in front of a junkyard, destined to be $100 worth of scrap metal when Mark and Nancy Wall found it. What had once been a beautiful red and white VW bus had been used and abused, painted brown and yellow, and covered floor to ceiling in rust-colored shag carpeting.

The couple saw its potential though, and bought it to convert into a travel trailer. Now they tow the bus behind them, with all four tires on the road!

Every square inch of the converted bus includes bohemian decor to fit its “Genie Bottle” theme. 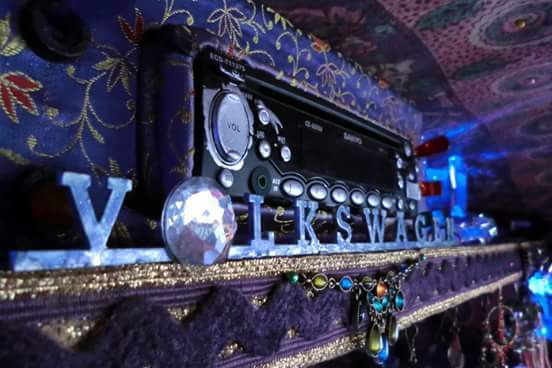 Since they wouldn’t need the engine, Mark lowered the top on the engine compartment 6” to make more headroom for another unique feature in their bus-trailer, a queen-sized waterbed. A vintage velvet quilt became the inspiration for the color and style of the bus.

The rich velvet linens and curtains give the VW’s interior the plush feel of a fairy tale Genie Bottle. 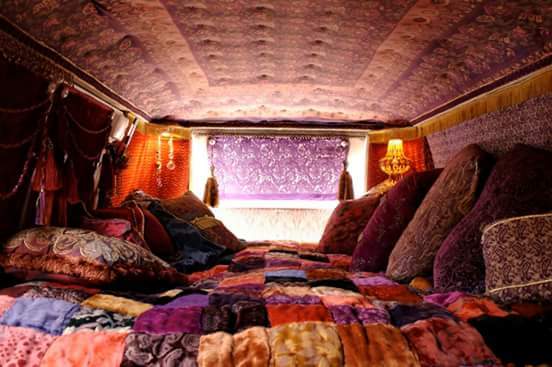 Mark and Nancy didn’t start out with a theme in mind, but simply added whatever whimsical touches they imagined, outfitting the bus with thrift store finds, craft store treasures, and some magical items reclaimed from dumpsters and trash piles.

A crystal chandelier adds to the view from the Genie Bottle at a recent VW Rally weekend. 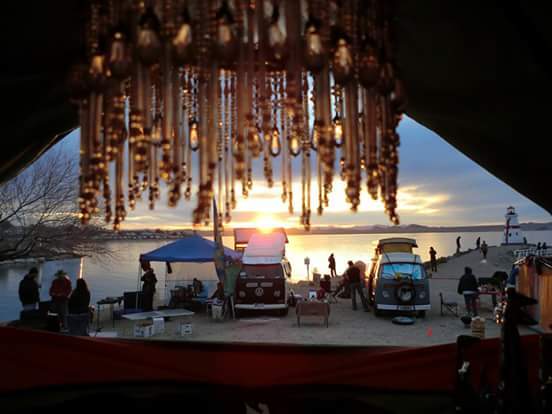 The exterior is covered in Bondo, so they decided to make that part of its charm, painting it with white exterior house paint to make the outside resemble adobe, a popular house exterior in New Mexico where they live.

Over 600 bottles of purple nail polish were used to create the unique purple stripe! 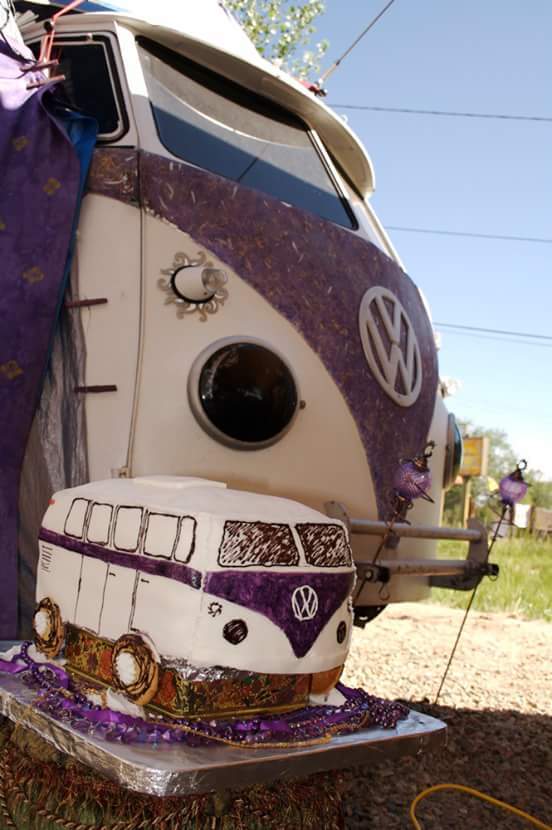 The purple stripe took over 600 bottles of nail polish. The bus has had many nick-names as a result, including “The Nail Polish Bus,” the “Taj-Ma-Bus,” and “Purple Passion,” but the name that finally stuck was bestowed on her at their second VW show. Nancy explained,

The Genie Bottle got her name at our second VW show, Buses by the Bridge in Lake Havasu, AZ.  I overheard someone telling a friend, “You have to see it.  It looks JUST like the inside of a genie bottle!”  In about 15 minutes, the buzz was all about The Genie Bottle.  When we won the trophy for Best Split Window, they announced our bus as “The Genie Bottle”, so it stuck.  We have a wall full of trophies.  They include Best of Show, People’s Choice, Best Shaggin’ Wagon, The Jimi Hendrix Memorial Award to name a few.

Inspired by the velvet bedspread, the decor has evolved into a complete bohemian retreat for the owners. 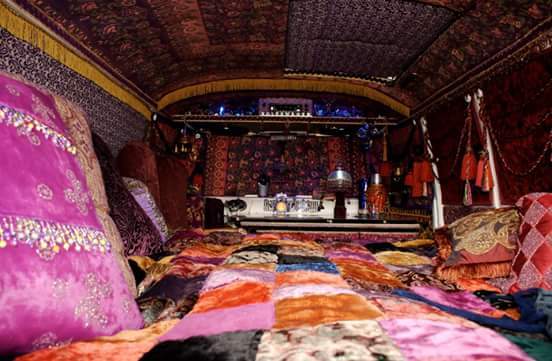 Every detail fits the theme, making it a showstopper at rallies and campsites. 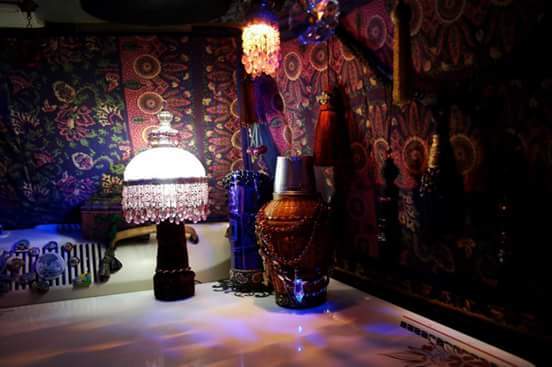 The Genie Bottle has a unique “sub-hatch” on top that flips open (a Westphalia feature) that Nancy outfitted with a purple brocade-covered tent top. Instant extra headroom and ventilation!

The hatch increases headroom and provides ventilation in the converted RV. 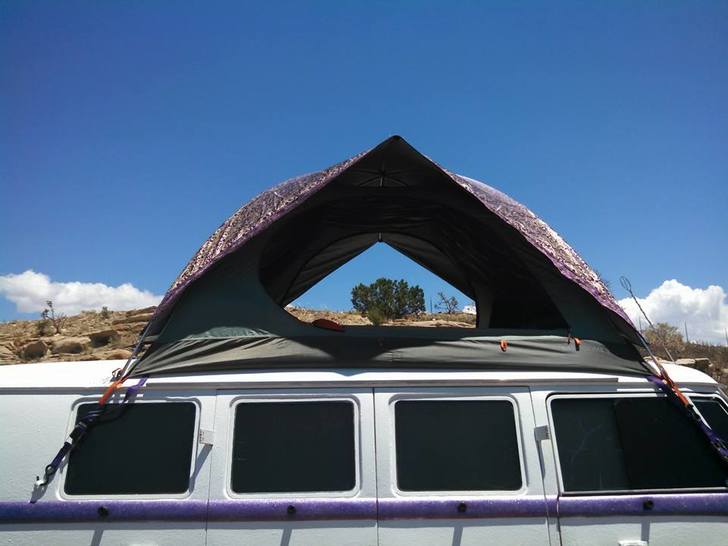 The two also have a custom Harem tent that attaches to the side, which not only matches their theme perfectly, but also doubles their covered space when camping.

The tent offers extra seating area outside, and adds to the decor. 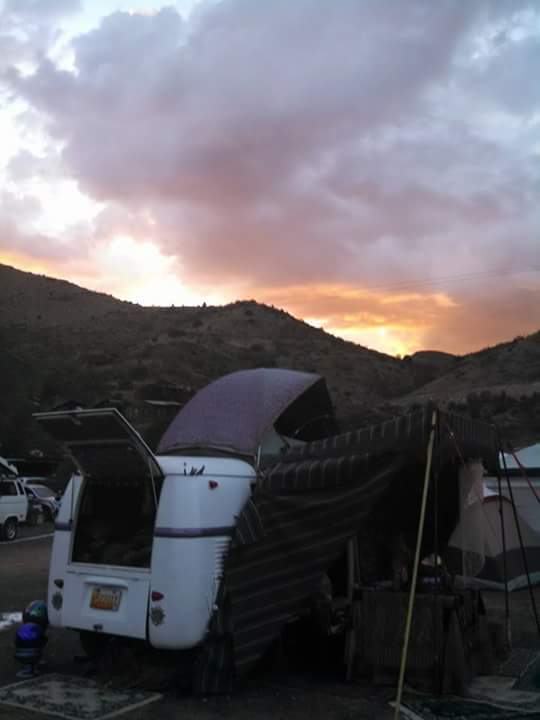 Mark and Nancy love taking The Genie Bottle to VW Car shows, camp outs, general car shows, and most importantly camping with their family and friends. People love to tour the bus, and everyone has a story about someone they knew who had a VW Bus in the past.

Many of the items on display in their bus were gifts from fans somewhere along the way. 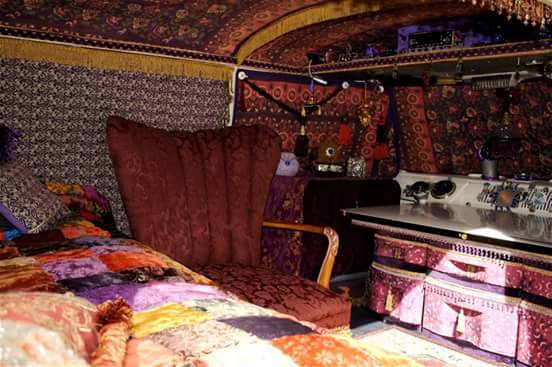 They chose a VW bus because they have always loved them, and have actually had several other VW’s though the years. But the magic of the bus isn’t only in the velvet curtains or the purple stripe, it’s also in the love story behind it. The couple sold their first bus many years ago to make the down payment on their first house. Many years later, Nancy was injured and couldn’t go camping anymore. She explains,

Mark built The Genie Bottle so we could camp in comfort. We get a lot of respect because folks are inspired by our obvious love! 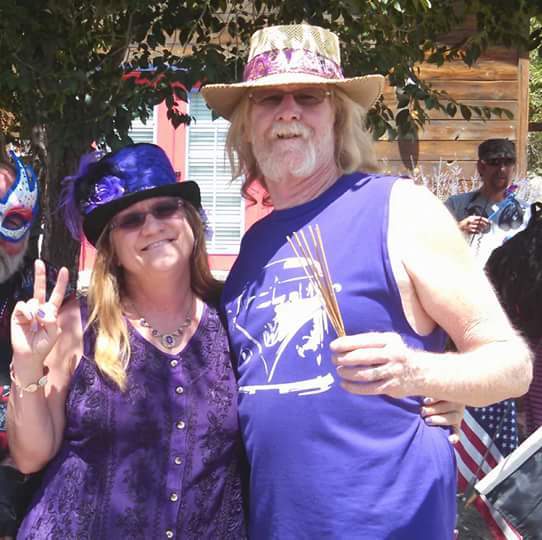