One couple and two dogs share this 98 square foot utility trailer as they tour the country playing music.

Kelly and Curtiss of the blog, Pay Gas, Not Rent, travel around North America in their 98 square foot utility trailer that they converted into a tiny mobile home. They are joined by Doug and Sawyer, their two rescue dogs. 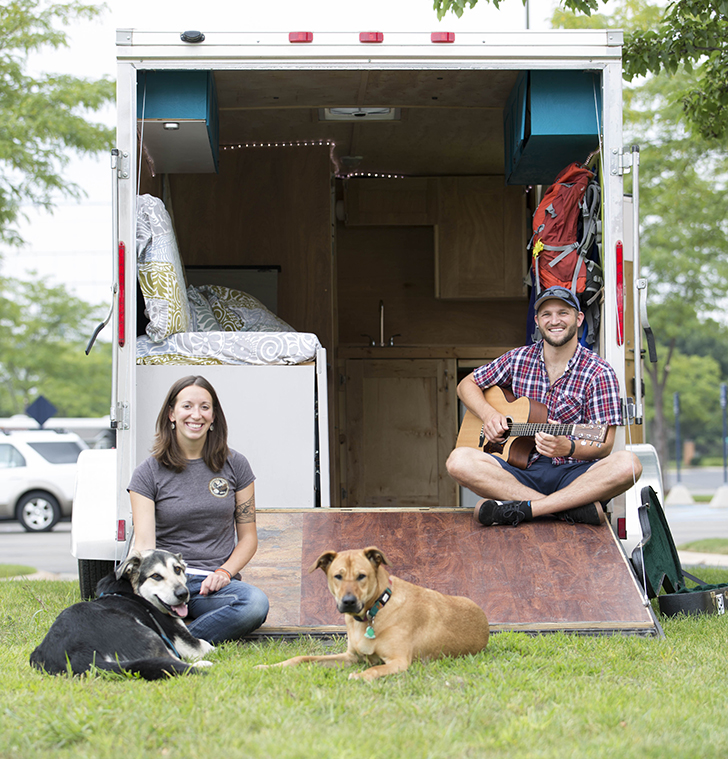 As a one man band named Cousin Curtiss, Curtiss wanted to live on the road and concentrate on his music. A summer tour from Alaska to Michigan inspired the couple to make the leap to their nomadic lifestyle.

The trailer has a sleeper bed, kitchen, shower, toilet, and plenty of room to hang gear and supplies. 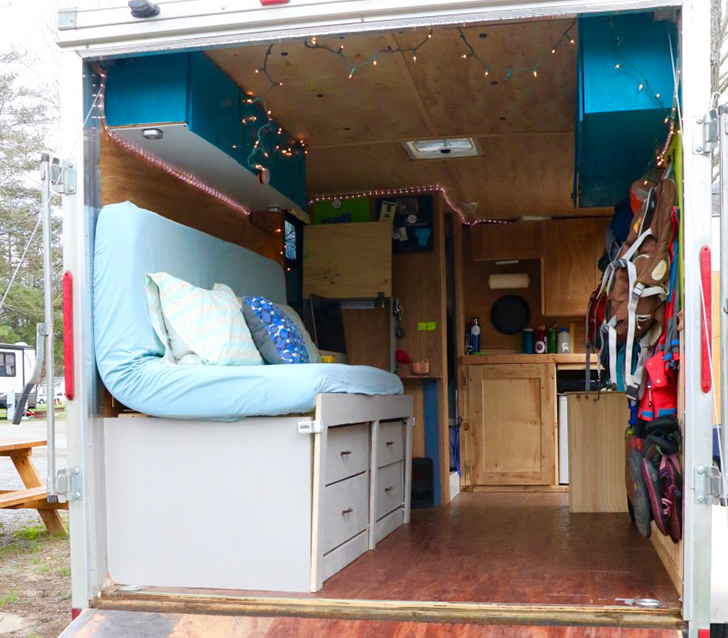 They purchased a utility trailer because the boxy interior would be easier to convert into living space. With no carpentry experience, they decided that a pre-made frame would work best for them. Their blog goes through the step-by-step process they went through to turn the trailer into their new home.

The interior also has a handmade work table Curtiss uses for editing music. 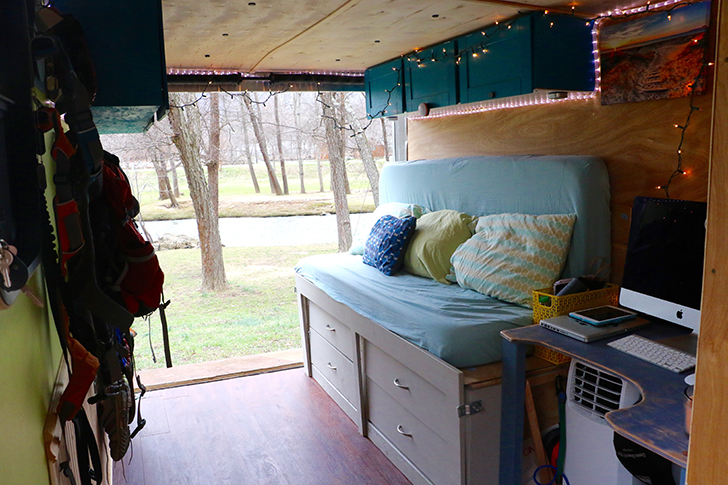 They began with a rough layout that included a shower area, small kitchen, a sofa bed, and a desk for working and music editing. The couple decided where they wanted to place each living and working area and then invested in a Goal Zero Yeti solar system to run everything from their refrigerator to computers.

Handy hooks help to keep gear and shoes off the floor. 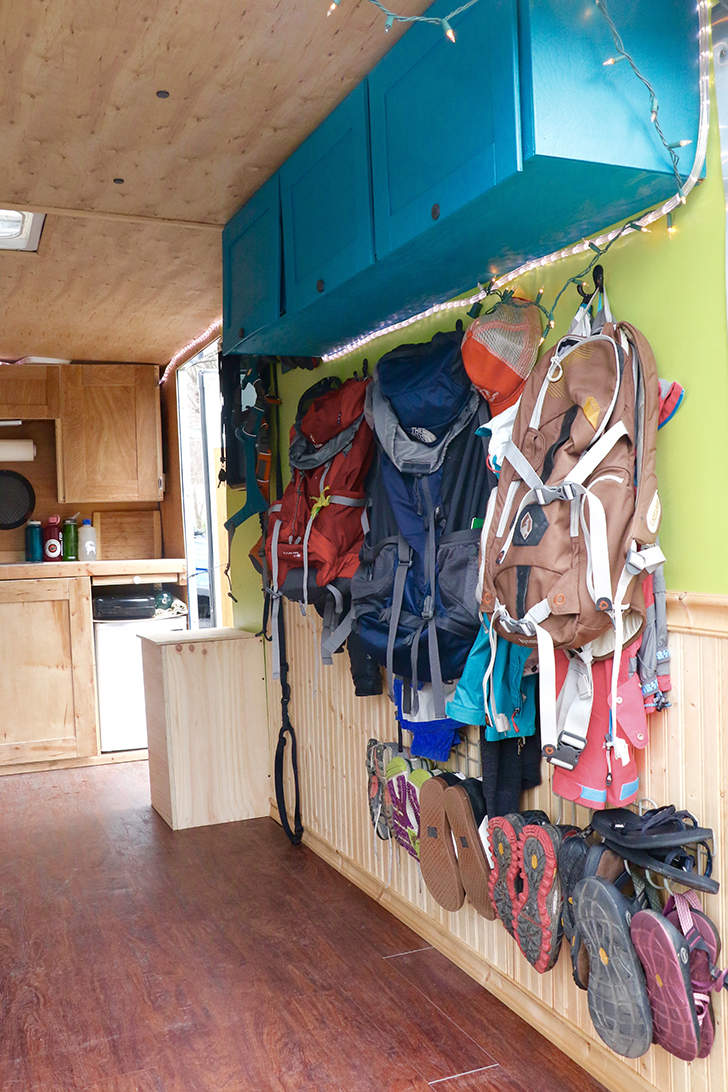 They stripped the interior walls and put in rigid insulation that would help prevent moisture buildup and reduce heat loss. They also put down some nice laminate flooring and trimmed out the entire space. The kitchen has handmade wooden countertops, cabinets, and a sink.

The couple came up with a rough layout and added rigid insulation under plywood walls. 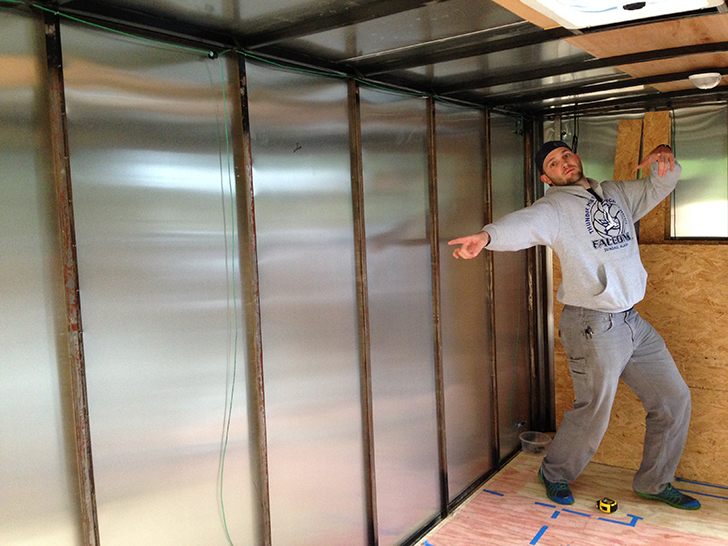 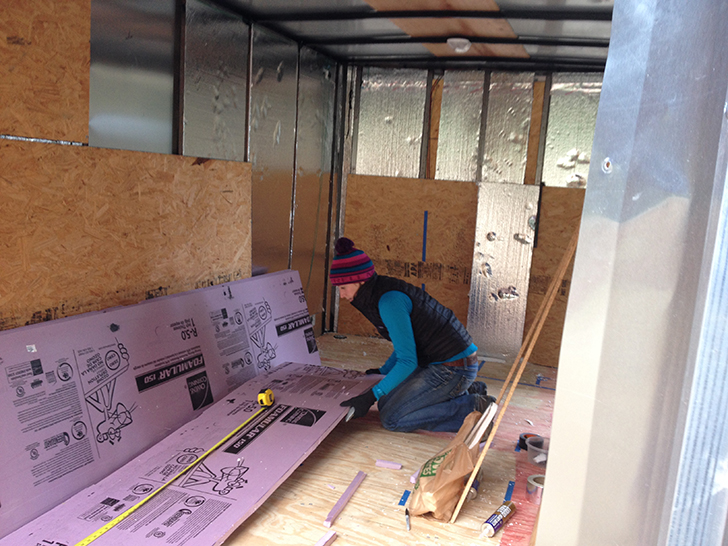 The shower was added to the back of the trailer next to the kitchen, and then sided with corrugated metal. The couple use a Nemo Helio pressure shower with a 7 foot hose and a foot pump to wash. The toilet is a basic version originally purchased for a boat and uses fresh water for flushing into a built-in holding tank.

The handmade kitchen counters were built around a dorm refrigerator and sink. 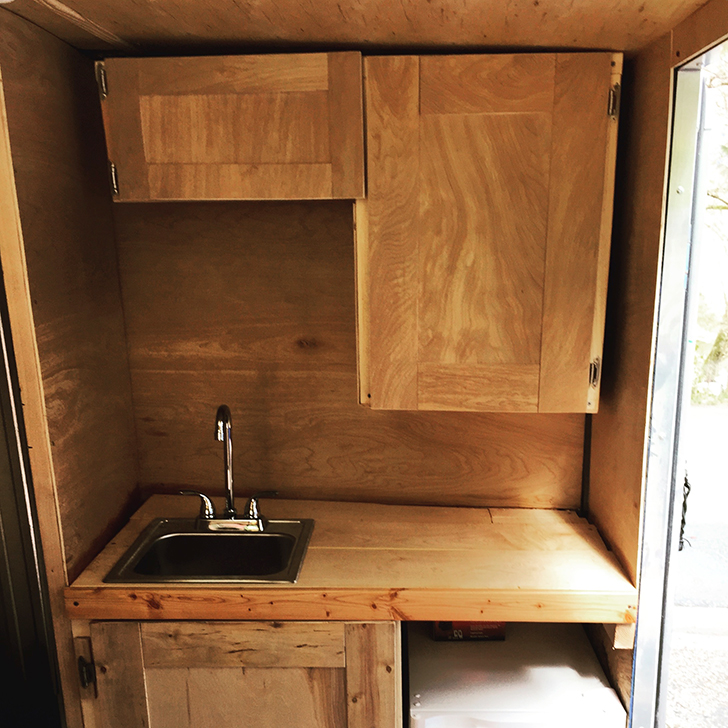 The sleeper sofa design was a challenge in that Curtiss and Kelly needed to find wood that was not warped in any way. Storage drawers were also built under the bed. During the day, the sofa stays upright and can be slid out into a bed with a real memory foam mattress. The couple also added a clip on each side of the bed frame so that when the bed is up, it won’t slide out during transit.

The slatted sofa bed slides out at night. 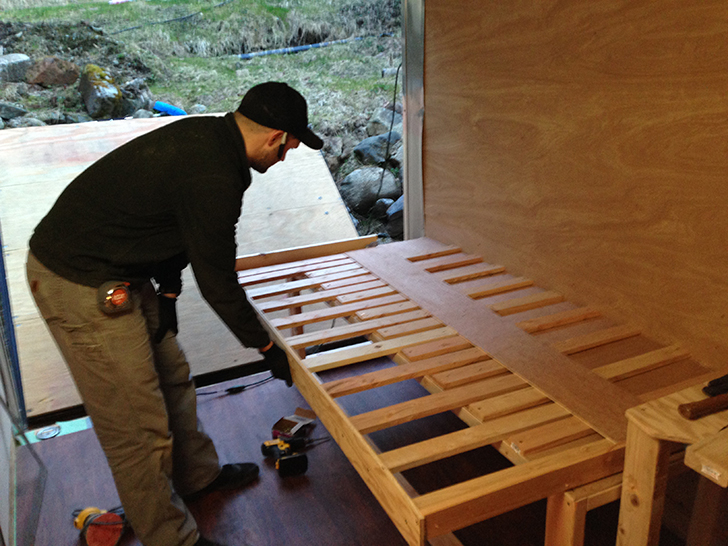 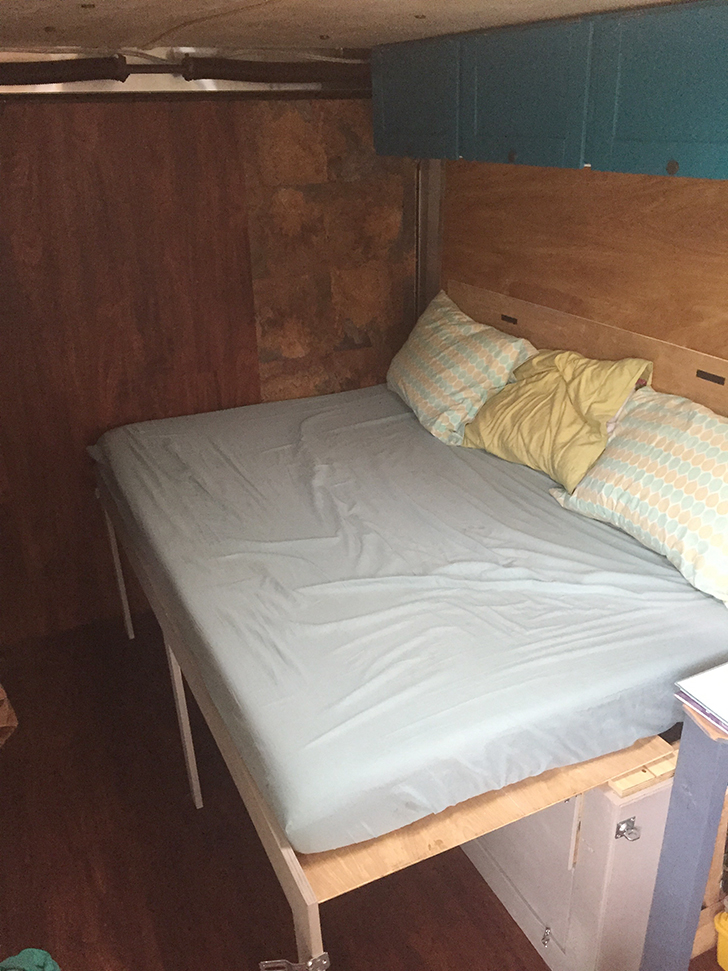 A clip was added on the bed frame so it won’t slide out during transit. 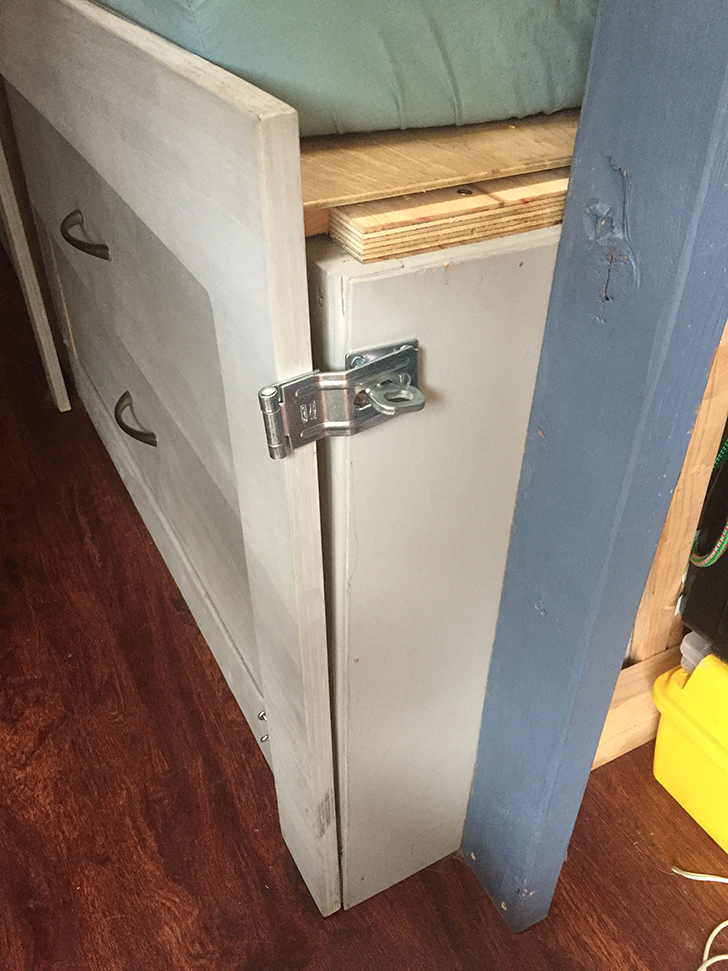 Travel in a utility trailer has opened up a whole new world for Curtiss and Kelly, but has not been without its challenges. On their blog they write about the bad gas mileage (11.1 mpg), finding places to spend the night, the problems with being a traveling musician, and how much money they have to spend for travel. In fact, the couple are up front and personal about their budget and list their monthly expenses on their blog.

The entire crew (humans and dogs) have traveled all over the U.S. in their mobile house. 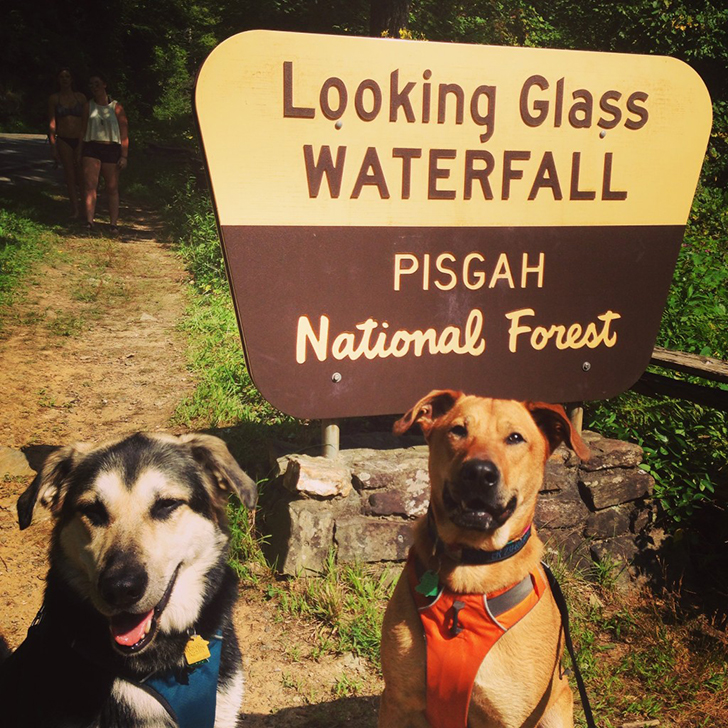 During their travels, Curtiss, Kelly and the pooches have been all over Alaska, Michigan, Florida, Ohio, Tennessee, North Carolina, Virginia, and Alabama. They’ve spent the cooler months in California, New Mexico, and Arizona. Cousin Curtiss is currently on tour in various states around the U.S.

Photos by Pay Gas, Not Rent