Skip to content
Table of Contents show
Nine kids raised in a 24′ motorhome.
Paskowitz Quits Medicine to Go Full-time RVing with Kids
What could be better than family, surfing and RVing?
Their full-time journey with kids sometimes got too cozy.
SEE ALSO: Go RVing Tips for a Family RV Trip: Take the Kids and Your Spouse Too!
Share this post:

Are you a parent yearning to defy convention and go full-time RVing with kids? If so, here’s an inspiration to live your dream: the zany but true story of the Paskowitz family, otherwise known as the First Family of Surfing – and probably full-time RVing too!

Nine kids raised in a 24′ motorhome.

Imagine that your partner or spouse returns home from a tough day at work, then announces they want to quit practicing medicine in order to travel and surf – with the whole family. That’s exactly what Dorian “Doc” Paskowitz did in 1959 when he hit the road with his third wife Juliette. Doc wanted a better life filled with surfing, healthy living and plenty of time to rear hearty, resilient children his own way.

Most modern, full-time RVing families look for a rig with the finest creature-comforts to keep the kids comfortable and entertained on the road. But not the Paskowitz family. Long before slide-outs, entertainment centers and toy haulers, this tribe of eight boys and one girl lived their full-time RVing dream in second-hand, beat up RVs that were all less than 25′ long!

What could be better than family, surfing and RVing?

Jewish kids growing up in a materialistic world, he said, “can become awfully over ripened … like a plum … too sweet and gushy. Spoiled rotten. That wasn’t going to happen to my kids. I said my kids are gonna live like animals and puppy dogs — and I found a wife that would do that with me.” -Doc Paskowitz JewishJournal.com

When Doc moved his family into a motorhome, there was no Internet for his kids to learn from, and no standard road schooling curriculum.

Instead, the Paskowitz kids learned to survive and thrive on their own – often as the family wavered into and out of poverty. As soon as they were old enough to stand up on a surfboard, each child got lessons on the fine art of catching a wave.

During the two decades they were on the road together, the children became so proficient in surfing – some eventually pursued professional surfing careers – that the family launched a Southern California surf camp in 1975. Here aspiring kahunas could live alongside and learn expert tips from the Paskowitz family and other students.

Their full-time journey with kids sometimes got too cozy.

None of the Paskowitz children were formally educated during their time on the road. Paskowitz’s philosophy about the difference between knowledge and wisdom led him to believe that the formal education systems in all the countries of the world were not useful. He believed that achieving wisdom came from real experiences in the world, and from meeting and learning from everyday people. He believed formal education was dangerous to young minds, despite being a Stanford graduate and a professor at community colleges, – Wikipedia, Dorian “Doc” Paskowitz

With their funky, used RVs parked oceanside, the Paskowitz family wasn’t hard to find. Through the years celebrities, musicians and everyday people gravitated to their bohemian lifestyle. In addition to teaching the fine art of surfing, Doc Paskowitz evangelized the importance of maintaining exceptional health. 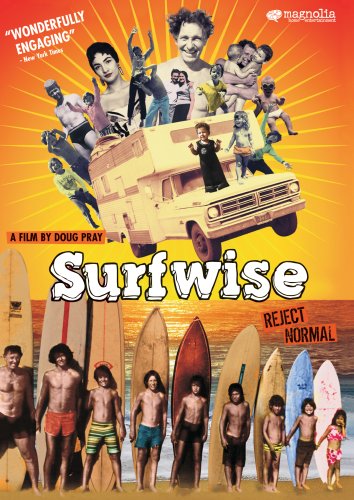 His philosophies served him well – he lived to the age of 93, long enough to enjoy the premier of Surfwise, an acclaimed Hollywood documentary about his quirky, and sometimes tumultuous family life.

If you’re getting negative feedback about going fulltime RVing with kids, don’t let naysayers put an end to your plans. If the Paskowitz family could do it, anyone can!

SEE ALSO: Go RVing Tips for a Family RV Trip: Take the Kids and Your Spouse Too!