The delicate art of “rigging” is a pastime passed down from generation to generation. A fifth wheel trailer hitch DIY project that has gotten out of control

The delicate art of “rigging” is a pastime passed down from generation to generation. Duct tape, super glue, c-clamps, Velcro, and 3M strips can largely attribute their success to the American can-do attitude. I would wager a bet than nearly everyone in their life cuts a corner on a quick fix. The reality is some are more realistic than others. Below are a few photos of a DIY project that has gotten out of control in a dangerous way. The fifth wheel trailer hitch photos below can tell the story. Common sense meet Mr. Ridiculous. 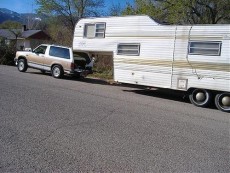 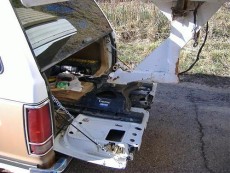 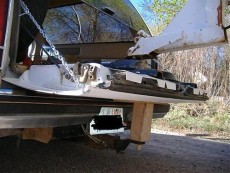 In an effort to convert what looks like a old Chevrolet Blazer into a fifth wheel RV hauling sensation, this owner crossed the line from DIY mastermind to “I don’t know what went wrong officer”. They took a gooseneck trailer hitch and installed it on a fold down tailgate supported by nothing more than support chains. As if this wasn’t questionable enough of a RV mod, the owner seemed to determine that it couldn’t hold the weight. Naturally an even worse plan was devised to use a block of wood wedged between the standard ball hitch and the tailgate to support it the likely 2-3000lb pin weight of the RV. Those chains holding up the tailgate must be holding on for dear life. Fifth wheel trailer hitch safety advocates would most likely establish a waiting period for purchasing hitch equipment so this never happened again.

That back end of the blazer is riding so low that one pebble on the road will make the suspension pop like a balloon. So the question is: Ever been so eager to take your RV on a trip that you would consider this? Ever seen a more hacked mod? Tell us about it in the comments below.