Skip to content
Table of Contents show
The stowaway waits for the police to arrive.
Shocked family stands by in disbelief.
This is how far the man traveled while tied to the motorhome. Wow. Over 54 miles.
Share this post:

You can hardly open a newspaper or turn on the TV without hearing another sensational story of how Mexican immigrants have desperately tried to cross the border and enter the US. Maybe it’s technically illegal, but it’s certainly an understandable desire. And people are willing to risk their lives to do it.

Well over in Europe they’ve got similar problems.

A teenager tried to enter France by tying himself to the chassis of a rented motorhome.

He made it through the entire Channel Tunnel, the tunnel that connects England and France, and was only caught when the motorhome reached its destination in Calais.

As the the driver unloaded motorcycles from the RV, he found the teenager stuck in the undercarriage. Police soon arrived and took the man away.

The stowaway waits for the police to arrive.

Shocked family stands by in disbelief.

This is how far the man traveled while tied to the motorhome. Wow. Over 54 miles. 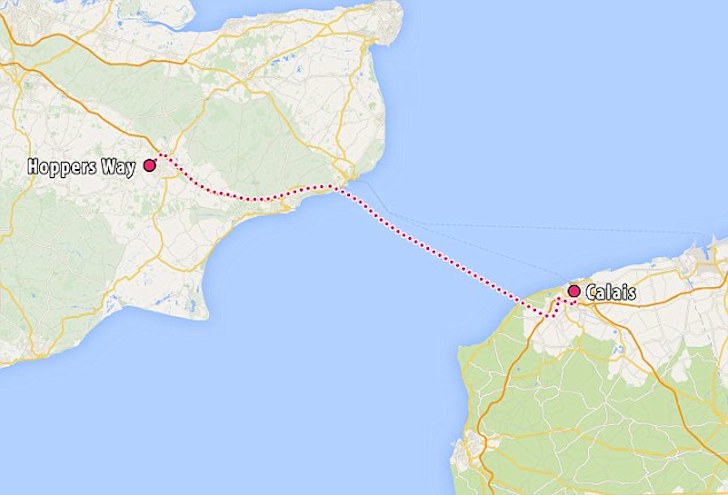 This isn’t the first time someone has tried to sneak out of the UK on a vehicle. Vacationers are advised not to stop at any gas stations near the entrance to the UK side of the Channel Tunnel for fears a stowaway might hitch a ride.

Paul Coles, the driver of the motorhome said,

I know there are many who don’t have any sympathy for them and I don’t want a ton of [illegal immigrants] coming into the country but they are human beings at the end of the day.

It’s tough seeing a young person try to find a better life while nearly killing himself in the process. I imagine it must take a lot of desperation to strap yourself to the bottom of a motorhome for a 50+ mile journey.