Utah’s Highway 12 is not short on accolades. Considered to be one of “America’s Scenic Byways”, named an “All American Road” in 2002, and often appearing on lists of the “ World’s Most Beautiful Highways”, this 124-mile path through the middle of southern Utah is one of the most spectacular drives in the Western United States.

Book ended by two national parks – Bryce Canyon and Capitol Reef – Highway 12 weaves through some of the most diverse, colorful and ruggedly beautiful landscapes in the country. 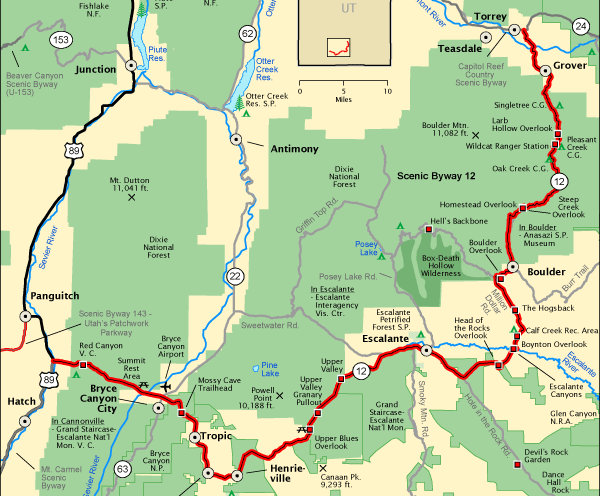 Located in the Southwest corner of Utah, Highway 12 begins at US Route 89 just north of Hatch and ascends to Red Canyon, named for the vermillion-colored surrounding hills and cliffs. Two short tunnels carved out of the limestone mark your journey into a world of wonder.

At the 13-mile mark is the turnoff to Bryce Canyon National Park. The massive canyon full of brilliant red spires, hoodoos, bridges and other rock formations sculpted by water and wind both delights and amazes.

Bryce deserves an extended visit – including a heart-thumping hike down into the canyon. But if you don’t have time to explore, at least hike to Sunset Point where you can peer over the edge and take a peek at the park’s otherworldly beauty.

For a longer stay, consider setting up camp at one of the two campgrounds inside the national park. Both offer dry camping for RVs and tents in a wooded setting only minutes from the famous canyon.

Continuing on Utah’s Highway 12 past the small towns of Tropic and Cannonville, turn right on a side road that leads to Kodachrome Basin State Park. This park was named by a National Geographic Expedition group who passed through the area in 1948. They were mesmerized by its varied golden-hued tones and named the park after the color film of their time – Kodachrome.

Kodachrome is best known for its unusual geographic formations, namely the 60 plus tall, upright sandstone chimneys called sand pipes that rise rise into the sky seeming to defy gravity. 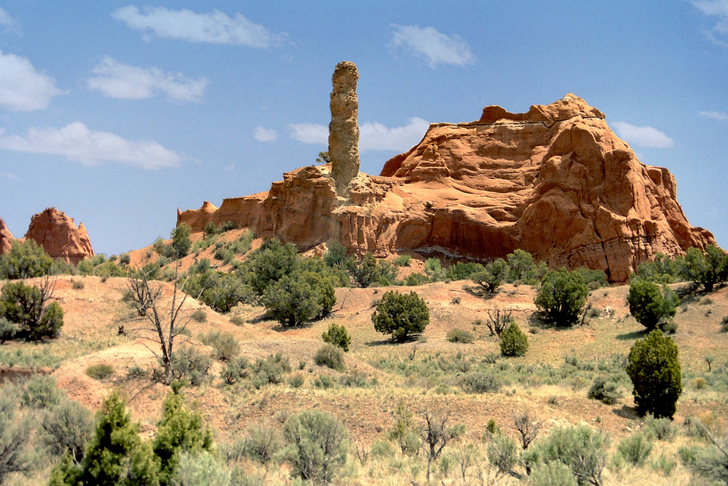 Plan to spend at least a few hours in the park hiking the trails that weave through the desert past badlands, fossilized geysers, and the ever-present sand pipes that dominate the landscape.

For your convenience, Kodachrome has two onsite campgrounds, one with utility hook-ups and one without. Both offer views of the surrounding area and unparalleled access to all the park has to offer.

Rolling into the tiny town of Escalante, be sure to stop at the Escalante Petrified Forest State Park. Here you will find two campgrounds and a short loop trail that winds among the remains of ancient trees toppled by floodwaters and buried in silt. The now petrified wood displays a surprisingly wide variety of colors, and a few stumps are so well preserved you can still see the bark. 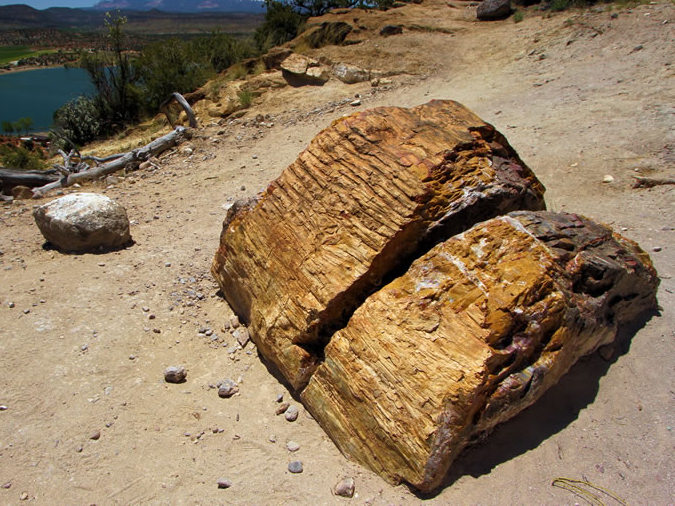 Escalante is also home to one of the three Grand Staircase National Monument visitor centers. This 1.9 million acre area was designated a national monument in 1996 to protect the land from coal mining. The designation has effectively put the town of Escalante on the map. The once sleepy ranching town is full of cabins for rent, outdoor outfitters, two RV parks, and a surprising number of restaurants.

Most people don’t come for the the town though. Instead they come to wriggle through the famous slot canyons, drive the Hole-in-the-Rock Road, or hike along the Escalante River.

The drive out of Escalante is perhaps the most stunning of the entire route. The road winds through a landscape of tan-colored petrified sand dunes, once part of a windblown desert that stretched from Wyoming to Southern Nevada, before climbing up to a high ridge with sheer drop offs on either side.

Boulder and the Anasazis

It’s probably best to plan your stop at the small ranching community of Boulder around mealtime. Find a seat at Hell’s Backbone Grill where they serve up locally inspired and sourced dishes sure to satisfy even the most gourmet eaters.

When you’ve had your fill of spicy cowgal meatloaf finished off with a chocolate chile cream pot, head over to the Anasazi State Park Museum to see ancient artifacts and remains from an Anasazi village dating back to between A.D. 1050 and 1250.

The final stretch of Utah’s Highway 12 climbs to an elevation of 9,200 feet over the top of Boulder Mountain. Covered with a dense forest of pine and aspen trees, Boulder Mountain is especially stunning in the fall when the yellow aspens create waves of color.

Utah’s Highway 12 ends, or begins depending on your starting point, at the town of Torrey, not far from Capitol Reef National Park. The park is named both for the rounded white Navajo sandstone formation that resembles the dome of the U.S. Capitol building, and for massive 90-mile long Waterpocket Fold, which early pioneers dubbed a reef because of its impossibly steep cliff walls.

The park has a 20-mile scenic drive and numerous hiking trails that will take you deep into a jungle of domes, cliffs, and twisting canyons. Set up camp at the Fruita Campground located in the national park surrounded by fruit trees, or at one of the full-service RV parks in the nearby town of Torrey.

Discover All That Utah’s Highway 12 Has to Offer

From the deep red hoodoos of Bryce, to the jaw-dropping canyons and sheer cliffs walls of Capital Reef, there’s an entire world to explore on Utah’s Route 12.

Remember to pack the camera, the binoculars, and your sense of wonder on this journey through some of the most amazing scenery in the world.