Dale Summers is 76 years old and loves to keep busy with various woodworking projects. One of his projects, the Squidget, was originally built for some simple, but comfortable camping trips. He received so many questions on his camper that he is now selling the plans for two styles of Squidget campers online.

The Squidget Pop Top Camper allows for additional headroom. Both campers can fit a person up to 6 feet tall. 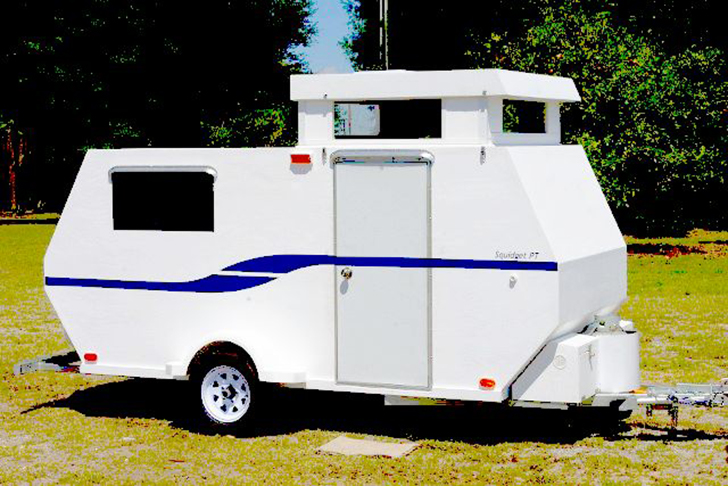 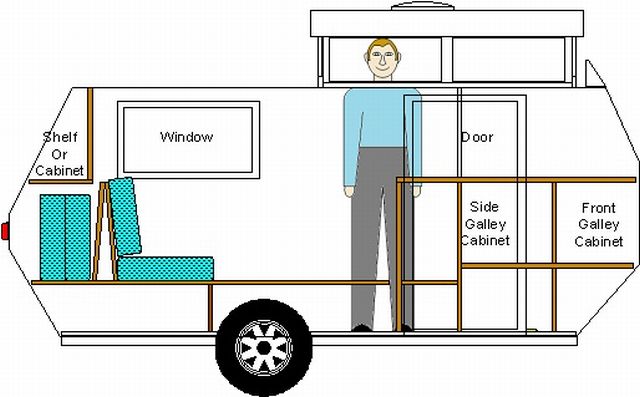 The Squidget and the Squidget Pop Top both offer space, storage and comfort in a small package. They range between 1,400 and 1,600 lb. and are towable by nearly all small pickup trucks, most mini-vans, SUVs and many compact autos, depending on their power and towing capacity.

The Squidget’s countertop can be made into a kitchen 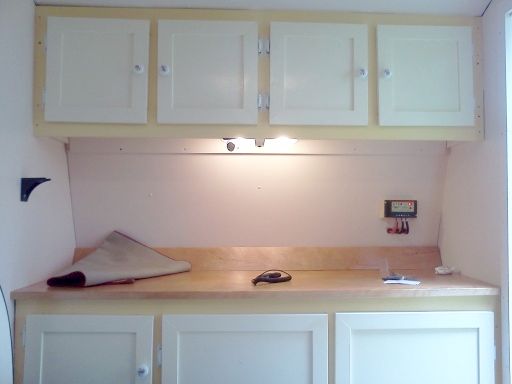 Dale’s final cost for the Squidget was around $3,500 in 2006. Inflation has probably increased the cost to build somewhat. Dale built his Pop Top trailer in 2011 for around $3,850, but after adding in optional and luxury items, the overall cost increased to approximately $5,040.

The luxury items in the Pop Top included a propane stove, sink and icebox. Both trailers’ basic cost include a 5000 BTU A/C unit, quality custom cut mattress/seat cushions, crank-out windows made for teardrop campers, microwave oven, a small HDTV and a Fantastic Vent 3-speed fan vent. The Squidget used a conventional RV door with integrated screen. Due to the low profile of the Pop Top, a custom door was built by a local company. Customers can install a small water tank and/or refrigerator if desired.

The basic features of each trailer includes:

The Squidget couch folds down into a bed 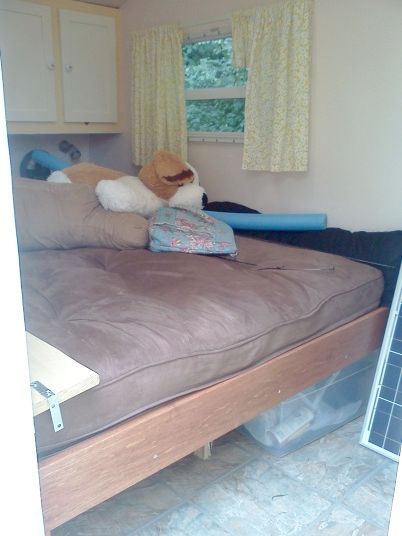 The Squidget can be built with basic hand tools, but, Dale recommends a builder have a table or radial saw, orbital sander and power drill. Optional tools include a router drill press, pocket hole jig, level and angle squares. Dale took about four or five months to build his first camper. Much of that time was spent working out the bugs and redoing steps that needed improving. Following the plans, a builder can build one of these trailers much less time than it took to build the original.

“In my opinion, anyone with basic woodworking skills can build one of my trailers,” Dale says on his website. “On my website, there are photos of trailers built by people who bought my plans. Not everyone stays with the plans for shape and size. Many modify their trailers to meet their needs or building skills.”

Although the plans include more than 70 pages of written instructions, more than 60 pages of diagrams, and 300+ photos, the simplified, basic steps for building the Squidget and the Pop Top are as follows:

The plans include these basic steps for building the Squidget: 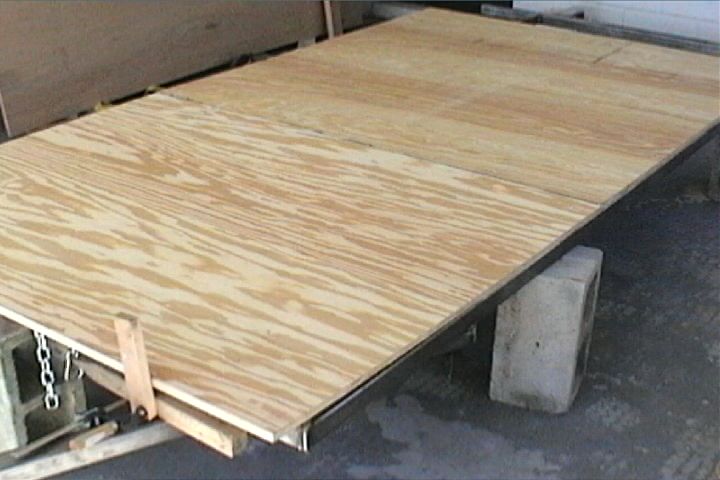 1. The first step is to construct the floor from 3/4″ plywood and make it water resistant. 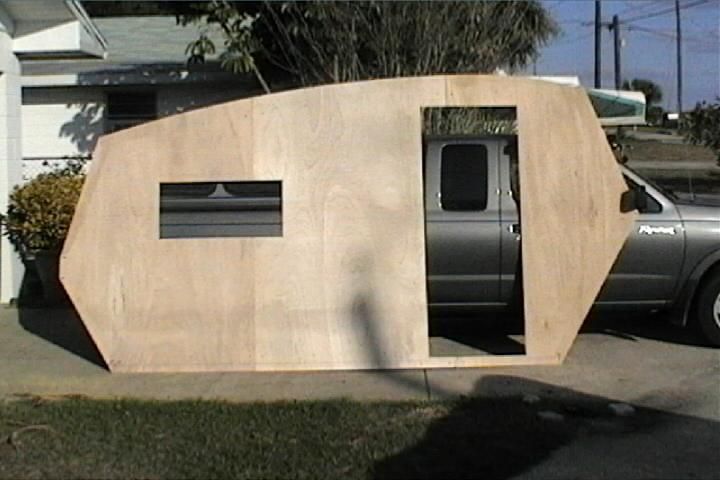 2. The sides are constructed, so that the build is similar to building a pre-fab house. 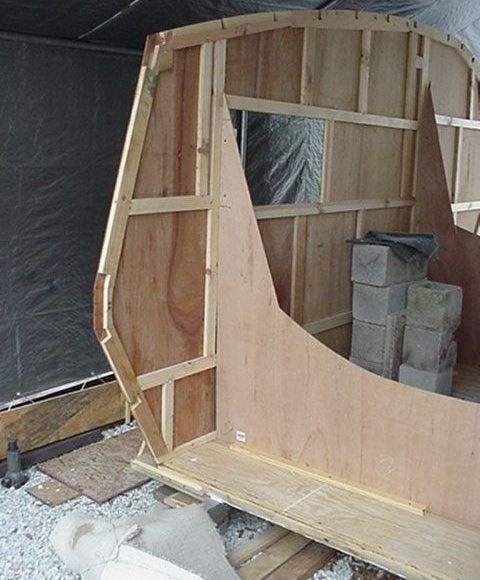 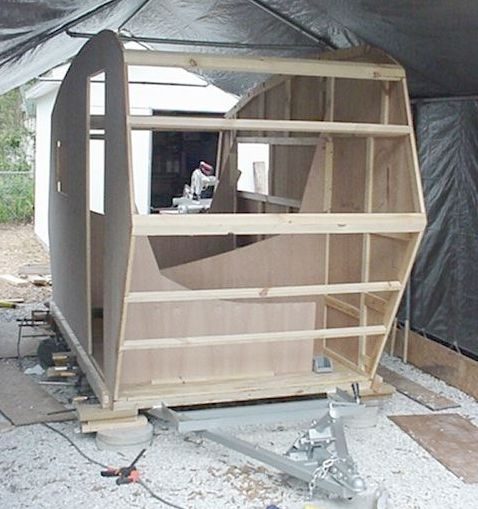 3. The sides are placed on the floor and braced at 90 degree angles and the side to side spars are cut and attached to the sides. 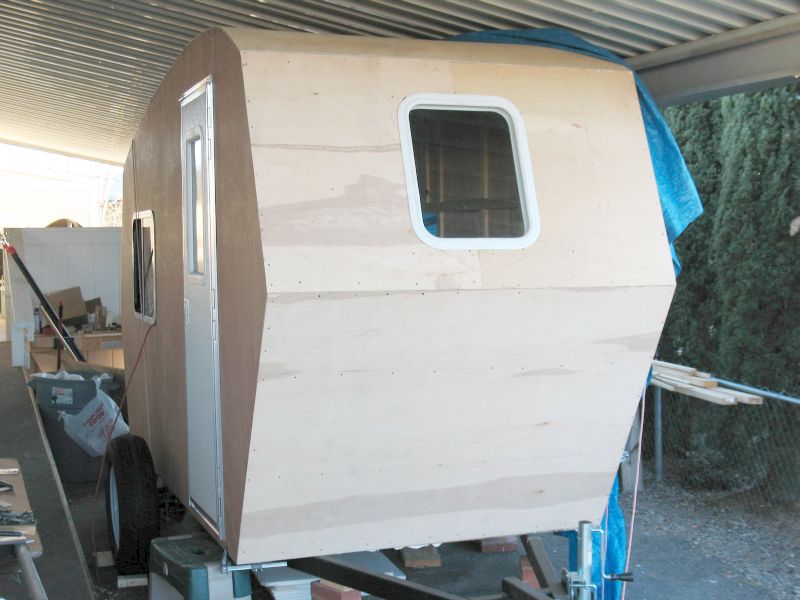 4. To complete the cabin, the front, top and rear skins are cut and attached, the exterior skin is coated with fiberglass resin, and it is primed and painted. 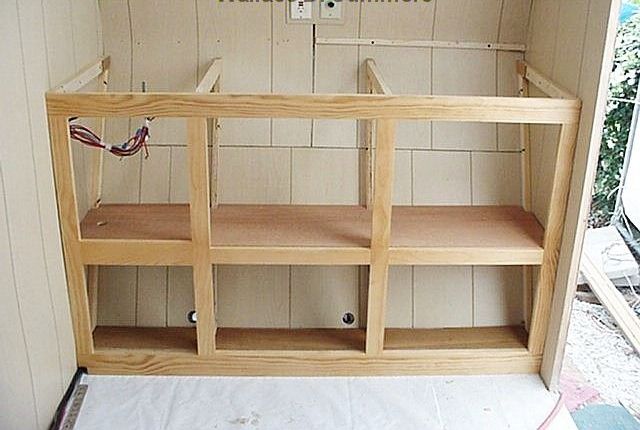 5. Now the detail work begins: running the wiring, installing lights and electrical fixtures, insulating, and the cabinetry work. How simple or how elaborate the finish is up to the builder.