It is hard to find someone who doesn’t have a cell phone these days. After all they can be a phone, GPS, map, music player, or even a video a game console. The only problem with these handy mobile devices is that they have a battery that must be charged. This means that from time to time you need to find somewhere to plug in. RV’s tend to have very few outlets in which to do so. To further the frustration the phone charge cord and phone itself can take up valuable counterpace and get in the way. If you travel with more than one person that it means more charger cords than you may know what to do with.

So, when a reader by the name of Ginnie R. sent us over this cell phone holder idea  that she called “her favorite small RV mod”, we felt compelled to share it. 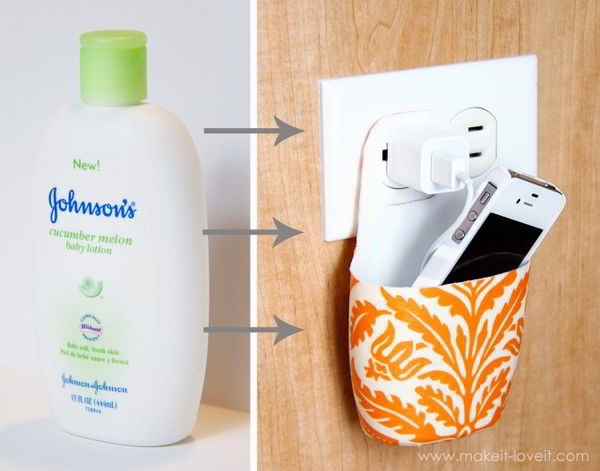 Ashley from Makeit-loveit.com sorted out a way to turn a used lotion bottle into a custom cell phone holder using little more than scissors (other plastic bottles may work as well). The important part is that the bottle be wide enough to house  your device and thin enough so as not to protrude too far from the wall.

The challenge comes if you are looking to make it presentable. At that point you will need to find some suitable fabric and use some Mod Podge (glue) to adhere it to the outside of your bottle/ cell phone holder. Ashley says you could also paint the cell phone holder as well. We decided to order some Plasti-Dip coating for ours to make it a little more versatile and tough.

The only concern we had which it turns out from reading the comments at Ashley’s blog, that we aren’t alone. Our concern was the plastic resting on the prongs. Some devices can get awful hot and could potentially warp or melt the plastic depending on the type you end up using. To resolve this you could easily install a hook or nail next to the outlet. Alternatively, you could leave the flap you cut out for the outlet on the cell phone charger connected at the top. Simply remove the other three sides but leave the top connected. Then, have it rest on top of the charger and its angle and weight should hold it snug against the wall.

For more information and detailed instructions on how to make a cell phone holder please visit Makeit-Loveit.com.

What do you think? Something worth re-purposing a old lotion bottle for? We would like to hear if anyone has any additional uses for something like this around a RV. Please share in the comments below.