They say that truth is stranger than fiction, and after seeing these photos you’ll know why!

The owner of the truck and camper found the photo of their burning rig on an Alabama newspaper’s website and wrote in under the comments section,

my husband and I were the owners of the camper. My husband and son were taking the camper to the Gulf for the holiday weekend, but unfortunately there was an electrical short that caused the fire. The truck had to have a little assistance be unattached from the camper. For bright eyes above this is a camper with electric jacks…fire started..no electricity.. therefore you are not able to lift the jacks to get the camper off the truck. They did get out and we are fine, but there is not much left of the camper or our two Harley Davidson Motorcycles. I commend the Spanish Fort police and fire who defiantly displayed the epitome of true heroes. This could have turned out a lot worse, but thanks to their quick actions and proficient knowledge the fire was put out and traffic was never disturbed. Well except for the rubbernecking..

The view from a passing motorist. 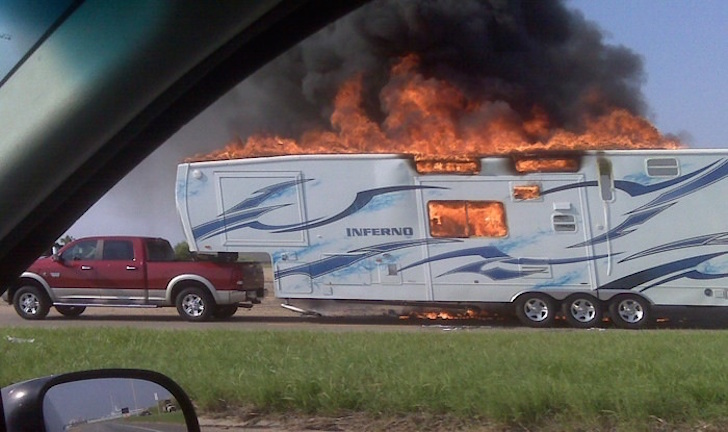 I drove by on my way to work and saw the smoke billowing from the side of the camper and was compelled to turn around- I then drove into the restaurant across the street to ask if anyone had a fire extinguisher but the building was locked- by the time I got back to my van there were flames shooting from the RV and within seconds it seemed to be completely engulfed. I saw your husband carrying what appeared to be a brief case and he was talking on his phone to 911 I presume and then sat down on the curb next to your son, and seemed to be pretty calm from what I could see. Not a minute later an officer arrived and I figured my rubbernecking wasn’t productive, so I snapped two pictures as I was leaving. I didn’t realize until I got to my office the name of the camper.

Fortunately, everyone was OK, and it was only the camper and truck that got the worst of this RV fire.