Skip to content
Table of Contents show
Harmon Shadow and a small tow car.
Sales booklet for the Harmon Shadow.
The Harmon Shadow came in three different models, ranging in length from 18 to 27 feet.
The Shadow wasn’t without top-of-the-line amenities of the time, such as a King-sized bed with a 6″ thick foam mattress.
Watch a Volkswagen Beetle maneuver this Harmon trailer in a video from 1974.
Let’s Make a Deal unveiling their prize: a new Harmon Shadow trailer.
Share this post:

Not all genius designs make an impact with the general public. Such was the case of Harmon’s unique and innovative Shadow trailer.

Harmon Industries made the Shadow at their plant in Warrensburg, Missouri in the mid-1970s. The trailer’s unique fifth wheel-inspired design allowed small, compact cars to pull the trailer through a hitch mounted on the tow car’s roof. 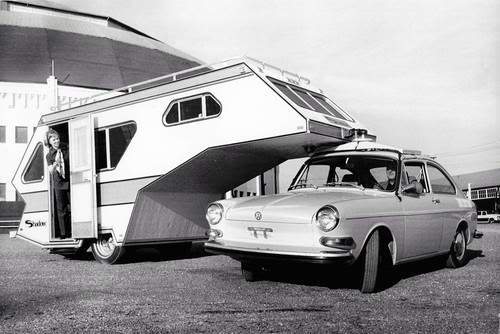 By placing the hitch on the roof of the car, as opposed to the rear, you could turn the tow car through a full 360 degrees while still hitched to the trailer. You’d never have trouble backing in the Harmon Shadow.

Unfortunately, the Shadow trailer concept never caught on with the buying public, and it quickly faded away into obscurity. No one knows the main reasons why RVers decided not to purchase, but general safety concerns and possible damage to the tow car caused by the roof-mounted hitch may have been the main issues.

[It]…was made by Harmon Industries in Warrensburg Missouri back in the 70’s.  I used to work there putting them together. If I recall correctly the roof mounted system caused damage to the rear end of a vehicle so they didn’t last long.

Here’s a few more reasons why it may have fallen out of favor, from another RV industry insider,

I worked in building RV’s for a long time. Three issues that come out of this ‘concept’ as to why you don’t see it now: 1. All car roofs are different, and where an Impala’s roof may have been strong enough to pull it, a Chevelle’s may not have been. 2. Get the trailer stuck, start abusing the car to unstick the trailer, and watch your roof turn into corrugated paper. Probably damages the A-pillars by the windshield, too. 3. Hit a tree, roof mount slides, instant slide-hammer on you.

This ad from Harmon Industries shows how the fifth wheel hitch mounted to the top of the tow car.

Here’s the text if you can’t read it:

Fifth-Wheel Trailers usually hitch onto a pickup-truck cargo bed, but this new Shadow design from Harmon Industries, Warrensburg, Mo. tags onto a passenger-car rooftop. A removable steel plate, bolted to brackets along the roof gutters, take advantage of the roll-resistance built into modern roofs to firmly anchor the trailer hitch. Great maneuverability and easy tow handling are claimed for these rigs. Models of 18, 23, and 27 feet are being produced, and unfinished units are available for extra savings. Shell for the Shadow 18-foot Mini will start at about $1700; price is $6500 for the completed 27-footer fully equipped. Driver reports indicate the design is aerodynamically suitable and does not buffet at speed or in strong winds.

Most Shadow trailers are lost to history, but every once in a while one pops up.

Sales booklet for the Harmon Shadow. 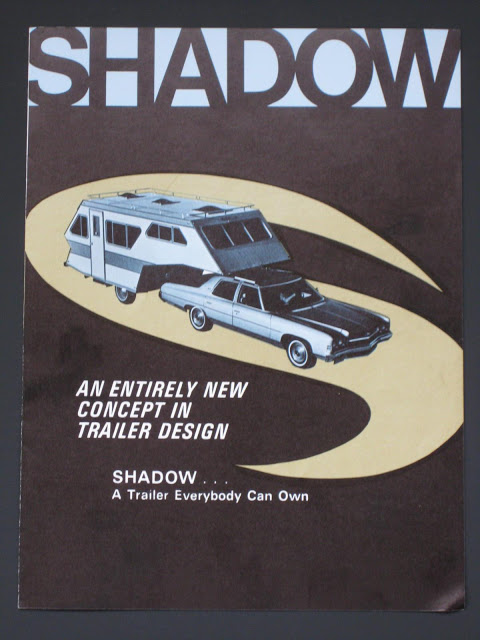 The Harmon Shadow came in three different models, ranging in length from 18 to 27 feet. 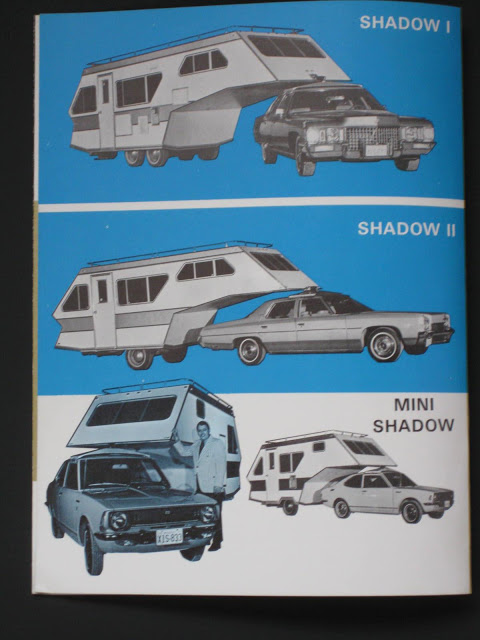 The Shadow wasn’t without top-of-the-line amenities of the time, such as a King-sized bed with a 6″ thick foam mattress. 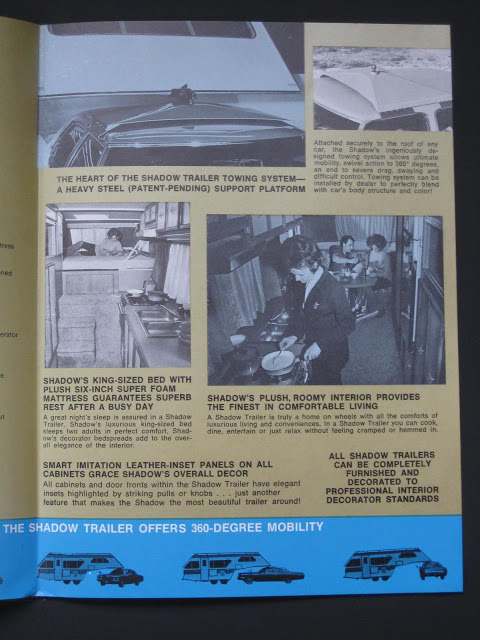 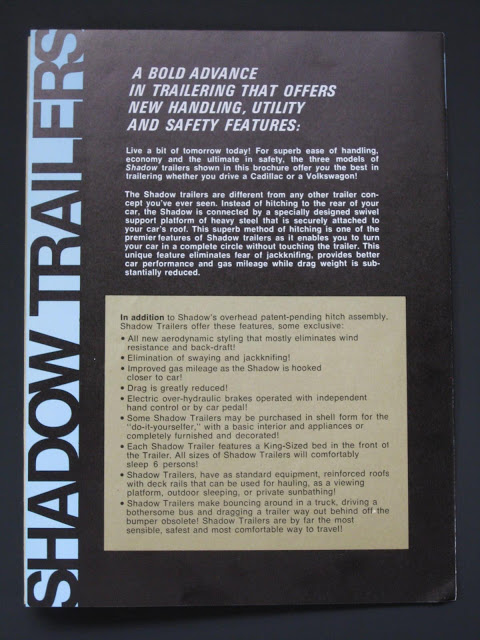 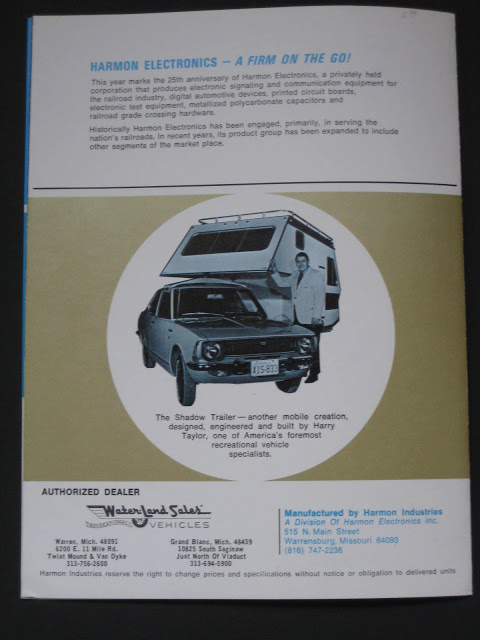 Watch a Volkswagen Beetle maneuver this Harmon trailer in a video from 1974.

The trailers were evidently popular enough that the game show Let’s Make a Deal offered one as a prize in the early 70s.

Whoa, that Shadow definitely got a few seconds (and feet) of airtime in the demo video. It’s too bad the engineers couldn’t get this design right. Maybe in the future, with new and stronger materials, they’ll be able to make a similar design that catches on.