If there’s one thing that’s a problem for people living or traveling long term in a van it’s the lack of a shower.

Even in most RV’s you’re limited to 6 gallons of hot water, making the old Navy shower (get wet, soap up, and rinse off) the norm for life on the road.

I’ve tried installing a shower in my van a few different ways. I’ll be the first to tell you, space is cramped and you’ll give up a lot of floor room for a shower. But it can be done.

I used the following items in my first attempt at an in-van shower:

You can hook it up to a water faucet, eliminating the need for the water pump, or you can plumb in a fresh water tank if you prefer your supply to be on board.

You shouldn’t have too much trouble piecing together all the components.

Here’s an example of a sink drain kit installed in the bottom of my plastic concrete mixing tub. 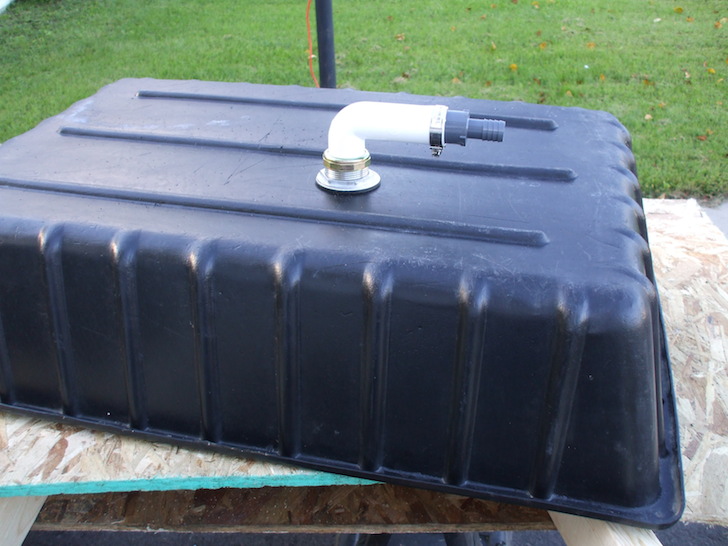 I placed the tub in the forward part of the van, but this setup didn’t work so well. The biggest problem to onboard showers in a standard van is that you’ll need to be sitting down to use them. 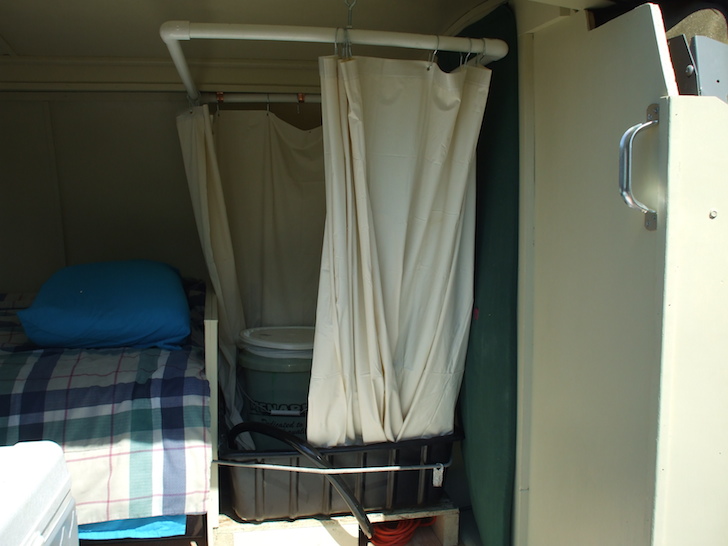 I’ll admit I got frustrated after a few attempts at using this shower. The space is just too cramped.

Another option would be to install the tankless water heater in the rear of the van, and take your shower outdoors when no one is around. 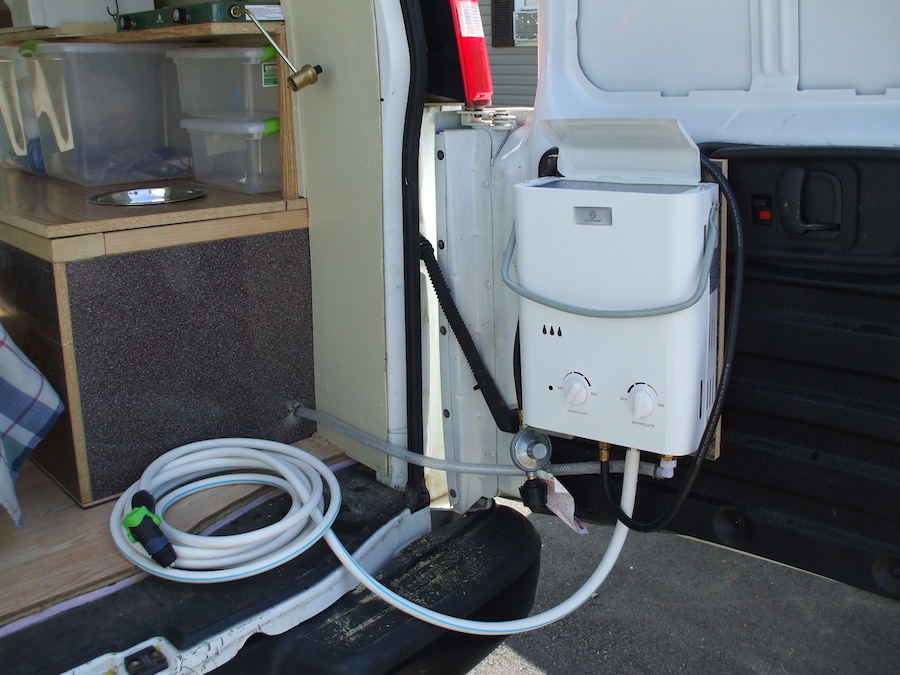 Some Ideas for Outdoor Showering

A better solution would be to use the shower setup outside your van.

An inexpensive shower tent along with a propane-powered heater will let you take downright luxurious showers without feeling cramped in your van. One popular brand is Zodi camp showers. 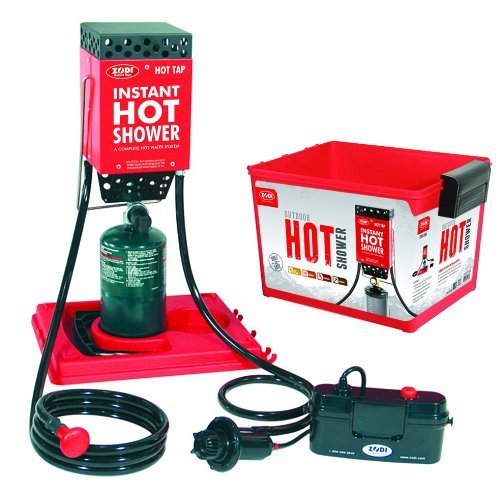 Zodi provides a variety of portable shower solutions. You can heat about 60 gallons of water with each bottle of propane, giving you plenty of days of showering in one charge.

If you don’t want to shell out $100-$200 for a propane powered heater, and you’re comfortable taking quick showers without a lot of water pressure, you might be interested in a simple battery powered shower. 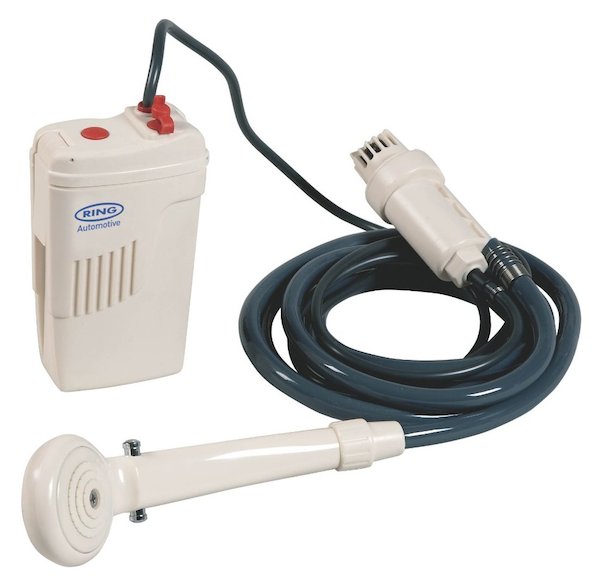 This battery powered shower by Ring Automotive in the UK runs off of four D cell batteries (not included) or via your van’s 12 V cigarette lighter.

The hose is about six feet long, and it comes with a suction cup device that will hold the shower head firmly in place on a glass surface.

Here’s a video showing you how easy it is to use this portable shower.

A final option if you’re camping mostly in warmer climates is a Coleman camp shower. 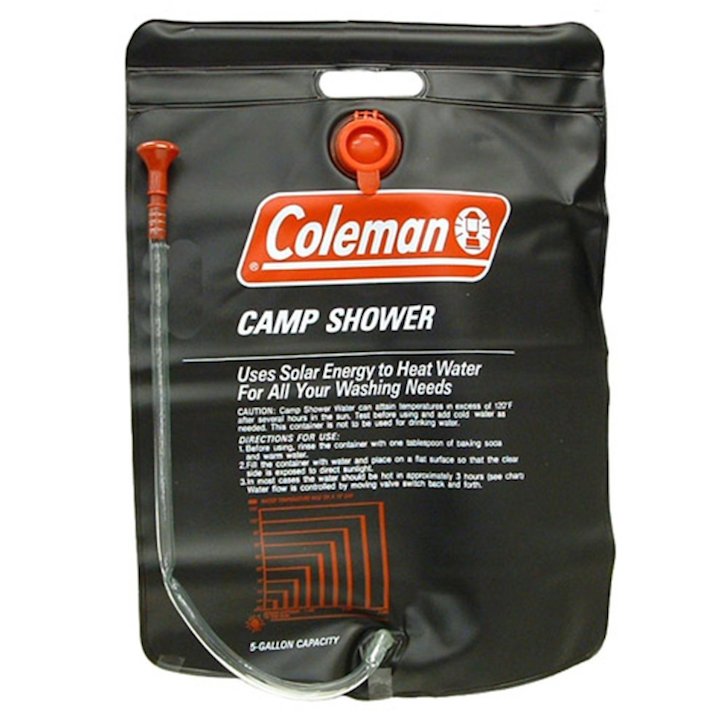 You just hang it in the sun and hope you get clean enough before the five gallons of water run out.

This video shows how the Coleman system works:

You have many options when it comes to creating a workable shower for your mobile life.

With a few easy to find parts and a little engineering, it’s possible to install a semi-permanent shower inside your van.

If you don’t want to go that route, you could hook up a tankless water heater to the inside of your van’s back door for a quick outside wash.

Or if you spend most of your time in the Southwest United States, maybe you can get by with just a simple solar shower.

Whatever your circumstances, taking a shower in or near your van isn’t such a big deal.

3 thoughts on “Here’s How to Install a Shower in Your Van and a Few Extra Ideas for Washing Up.”