You may have seen rowdy RVers gathering around this funny little contraption at RV parks or tailgating rallies.

Can this RV party game really be so much fun? Yes!

Nobody knows exactly when this RV party game made its debut at RV parks but according to some Ladder Golf experts, it might be older than full hookups, “Others speculate that the bola is a stand-in for a live snake, which cowboys in the western United States or caballeros in Mexico used to throw at fences or branches for points.”

Whatever its origins, it’s a ton of fun to play. What makes Ladder Golf a great RV party game:

…make as many remarks, sounds or movements as possible during play in order to distract the opponent’s during play.

How to Play the Ladder Toss RV Party Game

Each player takes a turn tossing their assigned 3 “bolas.” A bola is simply two golf balls attached by a 13” long nylon rope. Players toss the bola and try to wrap it around the top, middle or bottom rung of the ladder.

One by one, everyone takes a turn tossing their bolas. If you want to knock off other players’ bolas as you toss, go right ahead! That’s an awesome strategy to score more points.

Knock your friends balls off and score more points!

Points are determined by which step your bola wraps around. Each time your bola wraps around a step, you earn more points. Every part of the country has different Ladder Toss rules but generally the top step is worth 3 points, the middle 2 and the bottom 1, but if you don’t care about official rules go ahead and assign the points however you wish. Players can earn up to 10 points each, but you need to hang all three of your bolas on the step worth the most points.

You can buy a Ladder Golf game, but the instructions to make your own are so simple, anyone can do it.

Got extra PVC pipe and golf balls around? 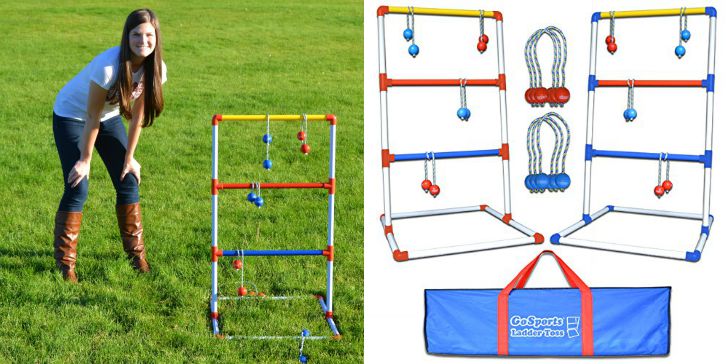 Step 1: Drill a 5/16” hole through the center of each golf ball.
Step 2: Paint your PVC pipe rungs
Step 3: Paint your golf balls: assign one color to each set of six balls.
Step 4: Cut your nylon rope into nine 20” pieces. Melt each cut end to prevent fraying.
Step 5: Make your bolas. Slide two balls onto the rope and tie a knot at one end. Make sure they’re 13” apart from end to end. Tie a knot at the other end.
Step 5: Assemble the ladder.
Step 6: Find friends and go have fun!