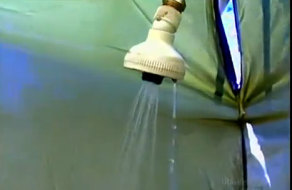 If you like RV boondocking to remote corners of the globe or even if you occasionally enjoy some dry camping in a Wal-mart parking lot, then surely you know the struggles over the shower situation in those instances. If you have more than just a few people it gets downright tense during shower time. Not that it isn’t necessary, an extraordinarily long shower can be costly for everyone else. It can mean an uncomfortable cold shower or frankly not one at all. Not to mention that running the hot water heater can be a power hog as well. If you are fortunate enough to find yourself camping near a body of water then many of these problems can be a distant memory. Bob Beekman from Alberta, Canada came up with an inventive creation that turns any water side campsite into the opportunity for a unlimited hot camping shower! 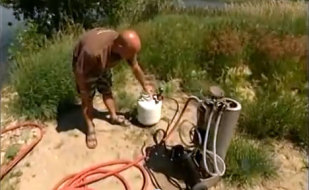 His wife named his device the “Frankenshower”, which is a testament to its looks and how it sounds when running. The camping shower is comprised of many parts which Bob sourced and assembled from scratch. All of the parts used can be found at a hardware store.

This camping shower isn’t exactly feather weight, coming in at a hefty 45lbs. But, if you are close to a water source then you can setup to have enough hot water for an estimated 170+ showers on a full 20lb propane tank. Yes, oddly enough the Frankenstein camping shower runs on propane. It uses the compressed propane to run the water pump instead of the traditional CO2. The used propane is then vented through a valve that is lit and used to heat an assembly that warms the water. The camping shower is able to heat water to a toasty 125 degrees. 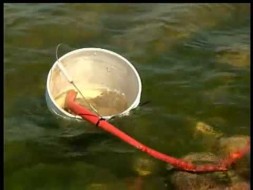 Bob designed a coil system from copper pipe that allows for him to easily adjust the temperature based on how far he inserts the coil into the heating assembly.

Bob uses a really simple method for drawing water into the pump. He puts a hose inside a bucket and sinks it to the bottom of the water source using a few rocks! This keeps a significant amount of sediment from entering the system. 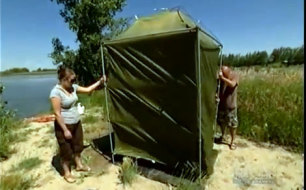 Getting the hot water to the shower head is only part of the story. Bob also built a custom shower stall with partitioned change room. He apparently stitched and built this from scratch as well! They commit to use biodegradable soaps and shampoos so as not to leave any harmful chemicals behind at their camp site. While he is at it:  What camping shower is complete without a matching DIY camping sink.