This post may contain affiliate links or mention our own products, please check out our disclosure policy here.
Learn the difference between biodiesel and grease fuel and how to use both in your tow rig or motorhome.

If you think that earth-friendly living and RVing can’t go hand-in-hand, think again. Any RVer with a diesel-powered rig can significantly lower their vehicle’s carbon footprint by turning away from petroleum-based diesel and filling the tank with biodiesel or veggie oil instead. 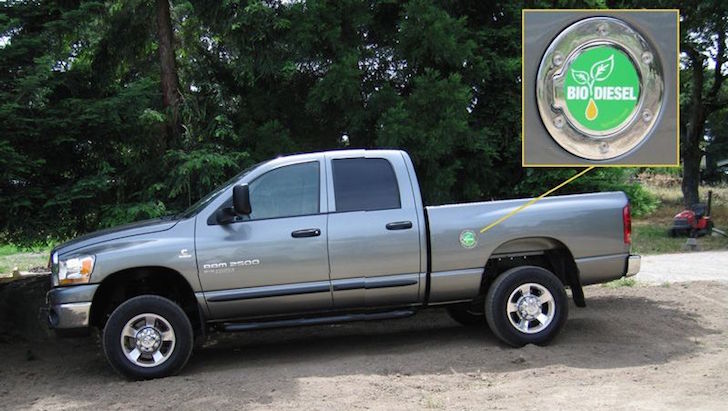 Although biofuels – including biodiesel and vegetable oil – have their pros and cons, either choice could be a win for the planet. Just ask Willie Nelson. Here’s what every RVer needs to know about filling the tank with these plant-based alternative fuels.

Biodiesel and Grease Fuel Are Not the Same Thing

Many people mistakenly believe that “biodiesel” and veggie oil / grease fuels are the same thing, but they are two very distinct types of fuels with significantly different features. Although both types are made from plant-based oils, the similarities end there.

The Basics of Biodiesel RVing

Biodiesel is similar to grease fuel because it’s made from plant-based oils, animal fats, or used restaurant grease. But that grease alone isn’t what fuels the engine. Through a process called transesterification, the oils/fats/grease are blended with an alcohol substance like methanol and a catalyst like sodium or potassium hydroxide in order to create a refined, pure biodiesel fuel that can be used in most newer, unmodified diesel engines.

Pure, unadulterated 100% biodiesel (known as B100) seems like a good idea, but pure biodiesel is not the most user-friendly fuel for the average diesel engine. Here’s why you’d be wise to avoid it:

To mitigate B100 risks, commercial biodiesel manufacturers will blend pure biodiesel with standard petroleum-based diesel fuel. This enables all diesel engines to run better in a wider variety of climate conditions. Different biodiesel blends are available commercially, with “B20” (composed of 20% biodiesel/80% straight diesel) being the most common on the market because it offers the greatest range of benefits to the planet and the engine, with the least amount of mechanical risk.

When diesel engines were invented in the 1800s, they were designed specifically to run on kerosene or coal dust and later, peanut oil. And although the petroleum industry almost obliterated that fact from our collective consciousness, the basic design of the diesel engine hasn’t changed. Even today, any RV with a diesel engine can be fueled with biodiesel, not just those branded as “eco-friendly biodiesel RVs” by certain RV manufacturers.

Whether you have a Dodge RAM diesel truck hauling a towable or an EarthRoamer all-terrain expedition vehicle, if you can make or find biodiesel along your route you can run this alternative fuel in your tank and enjoy its many benefits. Although owners of vintage vehicles and RVs made before 1994 will need to replace rubber hoses and fuel lines in order for them to be compatible with biodiesel, no mechanical conversions are necessary to run biodiesel in your RV’s diesel engine. 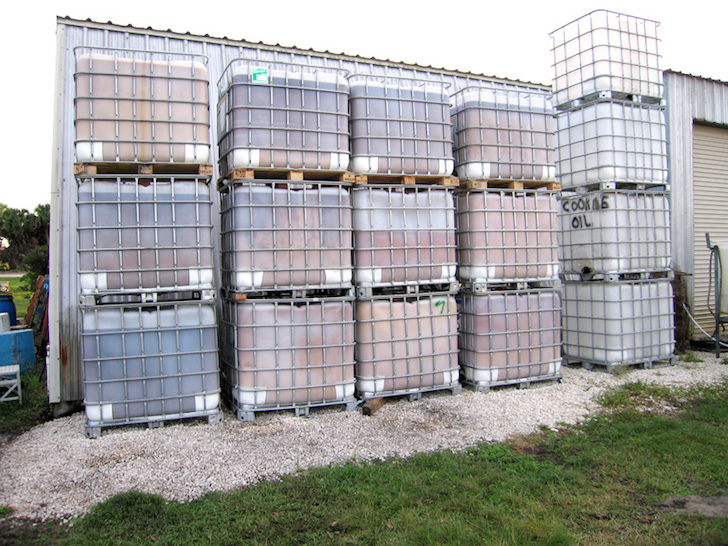 As nice as it seems on the surface, a biodiesel-powered RV isn’t quite a “use it and forget it” kind of vehicle. For starters, you will need some mechanical aptitude, which starts with being conscientious about changing your RV’s fuel filter. That’s because vehicles that have always run on petroleum diesel will have significant deposits left inside the engine and fuel tanks. When you introduce biodiesel to your engine, the lubricants from biodiesel’s vegetable oils will knock those deposits loose and clog your fuel filter. You’ll need to change that filter often during the first few months of using biodiesel. 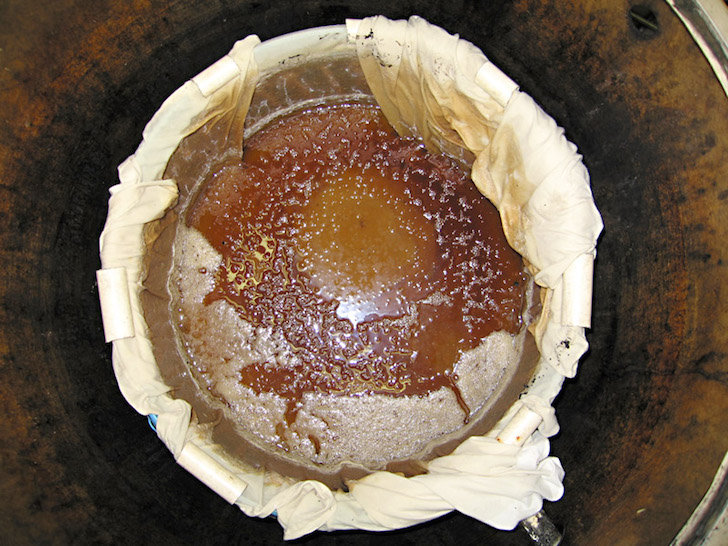 Also, when the weather turns cold biodiesel will turn to butter in your engine. It congeals faster and harder in cold weather than petroleum diesel, so changing the fuel filter is a must if you live in a freezing climate. In this situation you’ll need to acquiesce to running a B5 biodiesel blend (5% biodiesel/95% petroleum diesel) or even forget using biodiesel altogether until temperatures warm up.

Another aspect about biodiesel that you’ll need to consider is your supplier. Although anyone can make biodiesel at home, the cleaner and stricter the production process, the safer it is for your engine. Large scale production facilities are usually better able to provide clean biodiesel to customers than the backyard home brewer. The downside is that it’s increasingly difficult for the average driver to find commercially available biodiesel. In recent years, most biodiesel fuel production has been geared toward directly supplying agricultural or institutional fleet vehicles.

Biodiesel is a messy business. 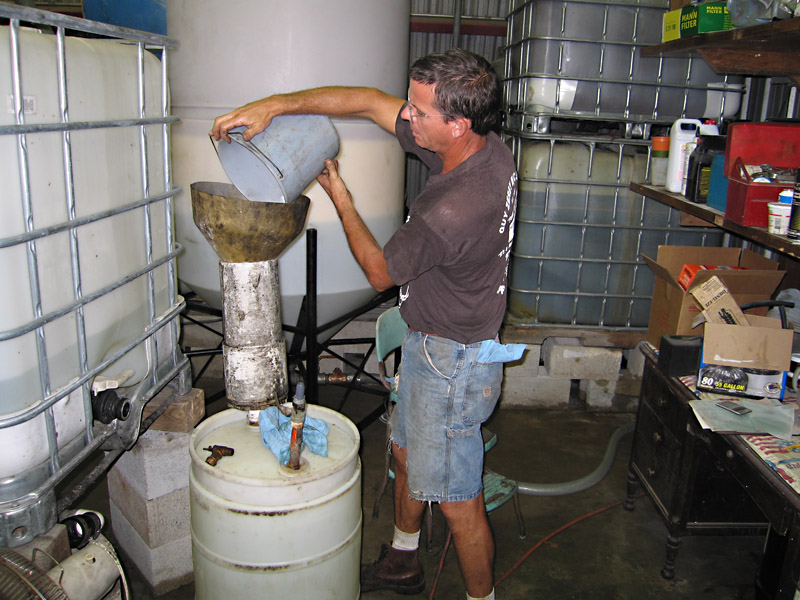 Despite these drawbacks, biodiesel is considerably better for your engine than petroleum diesel so if you can find it, great! Biodiesel acts as a solvent to keep your tanks and pipes free of harmful diesel deposits left by petroleum and emits far less pollutants into our atmosphere. It’s a win-win for you and the planet.

In addition, you can also save money when you learn how to make it yourself. Making this alternative fuel isn’t complicated, but you will need space for a DIY production facility and a connection to cheap or free veggie oil – a rare circumstance in an era when the majority of restaurant owners are earning profits from their used grease by selling this commodity to large-scale biodiesel production companies instead of giving it away to the local DIYer.

The Price of Biodiesel

Like all fuels, biodiesel has some pitfalls. In the early 2000s, filling your tank with biodiesel was a bargain as global petroleum prices spiked shortly after the terrorist attacks of September 11, 2001. But as the price of oil has drastically declined over the last few years, biodiesel prices have held steady and now cost more than standard petroleum diesel. This presents a dilemma for eco-minded diesel owners who sincerely want to take a stand for the environment, but find it difficult to pay twice as much per gallon for biodiesel.

In theory, more widespread use of biodiesel will enhance global stability among nations, since countries can grow and produce their own fuel. Unfortunately as production has grown, so has biodiesel’s perceived and real negative effect on the planet. Most notably, rain forest destruction is on the rise as a result of third-world countries who repurpose the land to create palm oil plantations.

In addition, an ongoing “food versus fuel” debate highlights the many problems caused by using agricultural land for biofuels production instead of feeding hungry people on the planet. Despite these controversies, biodiesel production continues to thrive as countries look for alternative fuels to help offset unpredictable spikes in global petroleum prices.

Now that you understand biodiesel basics, take a minute to learn how to live lightly in a grease-powered RV. For the average RVer, this is where things get more complicated so grab a cold one and sit back for a brief explanation that any biofuels novice can understand.

As the Mythbusters guys explain in this episode, in addition to petroleum diesel and biodiesel, your diesel-powered RV can run with either Straight Vegetable Oil (SVO) or Waste Vegetable Oil (WVO). You can literally take grease from a Chinese restaurant and pour it right into your vehicle after all of the required mechanical modifications are made. Should you decide to go the “grease car” route, you’ll have the best smelling RV on the road as the tantalizing scent of french fries wafts from your exhaust pipe.

Without a doubt, a grease-powered RV is the most eco-groovy, grassroots approach to fueling your vehicle. Talk about fossil fuel independence! But keep in mind that only the most dedicated of earth-minded biofuels hobbyists are willing to do the work that it takes to use it. If you’re up to the task, when you run your RV on straight vegetable oil, you’ll reap benefits like:

But as with anything, there’s no such thing as a free lunch. You’ll need to:

The technical aspects of converting your RV to a grease-powered vehicle are beyond the scope of this article, but if you’re still not discouraged by the pitfalls of grease cars and want to give it a go, take a look at these grease car conversion resources and tips:

Biodiesel vs. Grease: You Make the Call

RVs tend to get a bad rap by the general public. Many non-RVers see our home on wheels as nothing but gas-guzzling behemoths that drive around polluting the planet. Still, in nearly all cases, the carbon footprint of the average RV vacation is far less than a traditional family trip by airplane.

If you own a diesel-powered RV and choose to run biodiesel or veggie oil in your rig, you can feel even better knowing that your impact on the planet is even lower.