Skip to content
Table of Contents show
Prying The Awning Open Would Cause Serious Damage
TRIPLE the Cost By Buying From the “Manufacturer”
There’s a Pretty Good Chance That You Can Repair It For FREE
Share this post:

The Oasis Elite power door awning is one of the most popular on the market. Branded as a Dometic or A&E product, they’ve been standard or optional equipment on motorhomes from scores of major manufacturers for years. 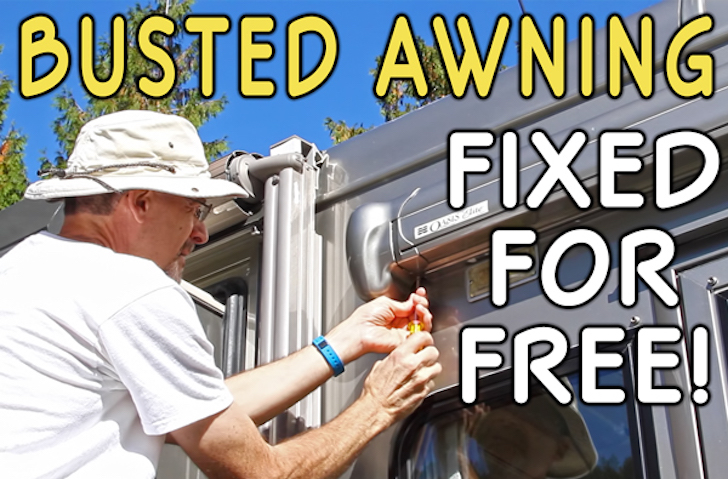 After 10 years of faithful service, ours recently stopped working completely. With the awning in the closed position, we were at least able to drive the RV. But with so few screws visible on the exterior, there was no obvious way to access the motor or diagnose the problem.

Prying The Awning Open Would Cause Serious Damage

Once we found out that a replacement awning would cost about $1,000, plus paint and installation, we immediately rejected the idea of taking a crowbar to it to force it open. If we wanted to have any chance of salvaging any part of it, we’d first have to figure out how to get it open.

It turns out that Dometic’s reputation for less-than-stellar customer service was pretty accurate, as they were no help at all. We then learned that the awning wasn’t even made by them. The Oasis Elite is actually manufactured by an Italian company called Fiamma.

TRIPLE the Cost By Buying From the “Manufacturer”

Once we got Fiamma on the phone, we learned a ton about our awning. They shared the hidden little secret to opening our awning without damaging it. They also revealed the dirtiest secret of all. A “Dometic” replacement motor that we’d found online for over $650 was available directly from Fiamma (who actually manufacturers the awning and motor) for less than ONE THIRD the price.

We were lucky in the end that we didn’t even need to avail ourselves of the discounted motor. When all was said and done, what could have been a $1,000-plus repair cost us exactly zero. Check out the video for details on how easy it was to do. Even if you’re not fortunate enough to be able to salvage your awning’s motor, at least you can see how to replace it at a reasonable cost.