Most of us have at least a nodding acquaintance with the battery that start our cars, but what about the batteries used in our Recreational Vehicles?

Are they the same?

All RV’s have a set of “house” batteries that power the lighting, water pump, and other 12 volt needs. 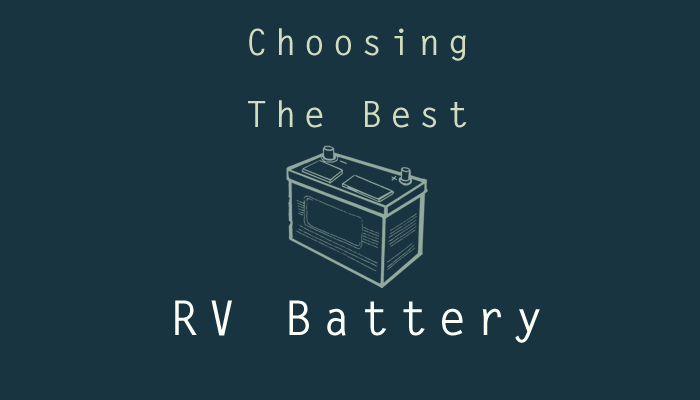 Multiple RV batteries may be wired together to make a single power source. These house batteries have different characteristics than the batteries used to start an engine.

Motorhomes, of course, have an engine and require an engine starting (chassis) RV battery, but this is always separate from the house battery system.

The starting (chassis) battery in a motorhome is the same type as used in a car, though often with a larger CCA (Cold Cranking Amps) rating because the engine is larger.

Choosing the right RV battery is simply a matter of getting enough CCA to do the job and generally that means replacing the battery with another of the same or larger CCA rating, the same as you would do for your car.

The best house RV batteries are a different breed altogether.

Furthermore, the house RV battery is often heavily discharged before being fully recharged again, what is known a “deep cycling”.

A RV battery designed for lower power and deep cycling will last longer and perform better than an engine starting battery. The best deep cycle batteries will last three to four times longer than a starting RV battery under the same conditions.

Deep cycle battery capacity is measured in AH (Amp-Hours), meaning the total number of amps of power it can deliver over a 20 hour period.

An alternative measurement is called RC (Reserve Capacity), which is the number of minutes the battery can sustain a 25 amp load.

You don’t have to understand the method of measuring to know that “more is better”, so a battery with a larger AH or RC rating is better (more capacity) than a smaller one. Unfortunately, there is no meaningful way to compare AH and RC values, so make sure you compare apples to apples.

So-called “marine” batteries are an attempt to make a compromise design that combines the characteristics of starting and deep cycling. As with most compromises, they aren’t great for either need, but they may be suitable for some RV battery situations.

A marine battery trades a lower CCA rating for somewhat better deep cycle performance. It’s main advantage is that it is a variation of a starting battery and can be produced by the same manufacturing process, making it a less expensive battery than a true deep cycle.

Useful Technology for a RV Battery 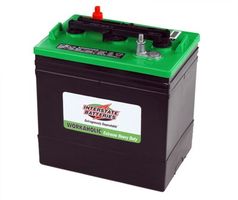 Currently, all RV batteries use lead-acid technology but it comes in different packages.

The basic package is called a “flooded cell” battery, in which the lead is bathed in a liquid water/acid solution (the electrolyte).

This type loses a little of the solution each time it is charged, so requires the addition of some water once in awhile.

So-called “maintenance free” batteries attempt to reduce the loss of electrolyte by sealing the cells except for a tiny vent hole, but this isn’t effective under the frequent heavy charging that is typical of deep cycle use.

It is not a good choice for a house RV battery. AGM (Absorbed Glass Mat) batteries retain the electrolyte solution in a sponge made of glass fibers and are totally sealed except for a safety valve. This type is very effective in reducing the loss of electrolyte during charging and is an excellent technology choice.

Gel type batteries use a thick paste electrolyte and are also fully sealed, so they are a good choice as well. However, AGM has largely replaced Gel technology for RV use.

A popular choice for an house RV battery is the 6 volt size designed for use in golf carts.

It is an extremely rugged, deep cycle design and two of them can be wired in series to form a 12 volt battery that works extremely well in RV applications.

Golf cart batteries must be used in pairs, so you need space for 2 or 4 or 6 of them. They are available in both flooded cell and AGM types.

Share on TwitterShare on FacebookShare on PinterestShare on LinkedInShare on Email
Pages: 1 2

44 thoughts on “Choosing the Best RV Battery: Which is Right for You?”