This butane-fueled camping heater is available from Nomadica Outfitters, a site that specializes in off-road and overlanding equipment.
27
SHARES
10709
VIEWS
ShareTweet

Have you come to depend on a portable propane heater for extra heat during the cold months, but find those green propane canisters a bit large and bulky? Or do you find the available options for portable heat a little pricey? If so, try out this tiny heater that runs on butane. It even comes with a handy carrying case. 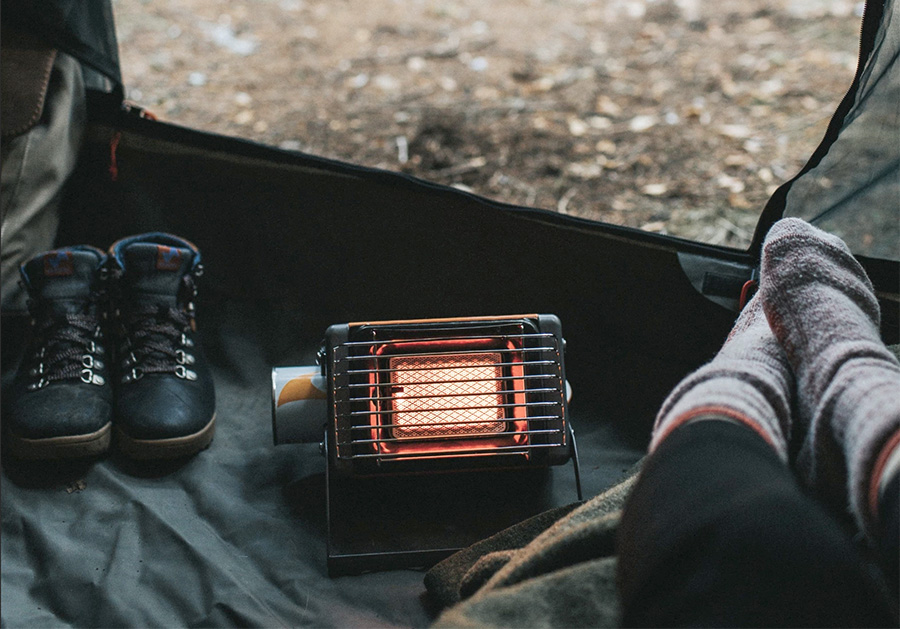 The Cupid is a tiny, butane-fueled camping heater from Nomadica. Photo by Nomadica

Being able to have items in your RV that are lightweight, simple to set up, and easy to use and store is important. This is especially true for items that are used only once in a while, such as heaters or other cold-weather tools. The Cupid Portable Heater ($98) from Nomadica seems to be one of these tools.

I have used the Mr. Heater Little Buddy propane heater for years but found it to be a little top-heavy and bulky for our trailer’s small floor space. I recently purchased the Cupid Portable Heater for our 13-foot trailer.

What I initially liked about the Cupid is that it has a smaller profile than the Little Buddy and comes in a handy carrying case. The Cupid also runs on butane canisters rather than propane. While butane doesn’t run as efficiently in colder temperatures as propane, the eight-ounce canisters are much more compact than the typical 16-ounce propane canisters. 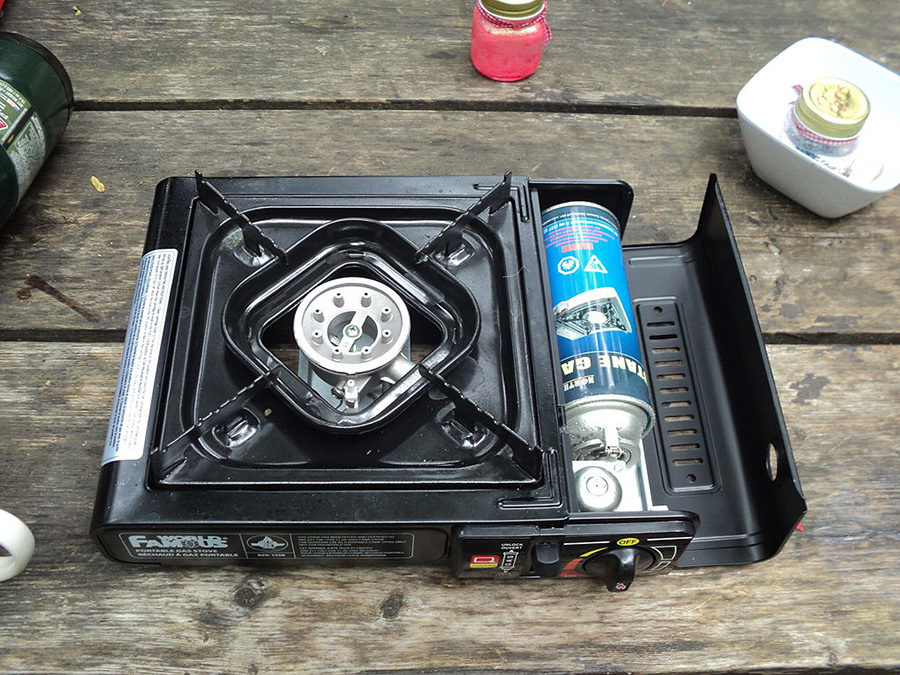 Butane can be used for cooking, heating, and lighting. Photo by Wikimedia Commons

In addition to their canister size, butane burns more efficiently than propane. However, with any compressed gas heater or stove, ALWAYS make sure you use it in a well-ventilated space. In an area with less oxygen, propane and butane gas stoves can produce deadly carbon monoxide.

A window or roof vent should always be cracked while it is in use. Install a carbon monoxide detector with an alarm in your rig as well. I only intend to use this heater to warm up our camper before climbing into bed at night or during colder mornings. 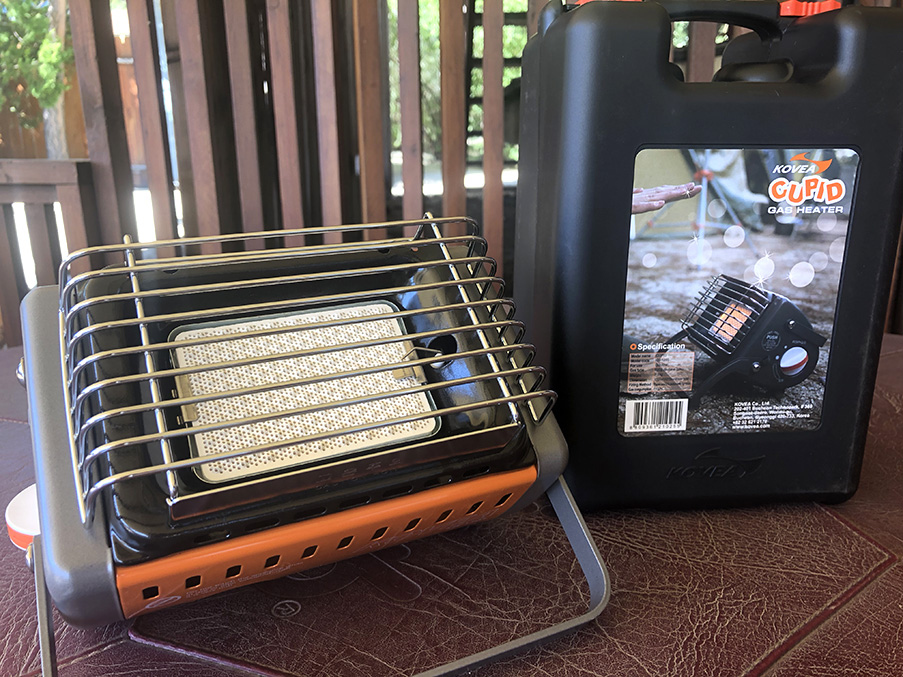 The Cupid comes in a carrying case about the size of a lunchbox. Photo by Christina Nellemann

The Cupid comes in a plastic case that is about the size of a lunchbox. The metal heater has sturdy, collapsible legs and a handle for carrying it around. The stove only weighs three pounds and has a ceramic-based heating plate and automatic striker for lighting. 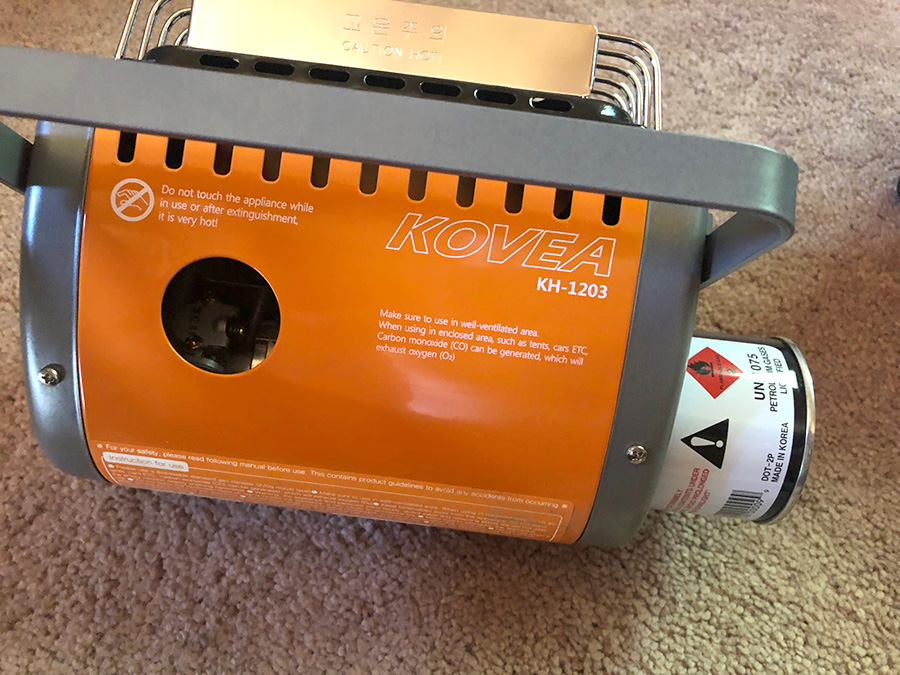 The butane canister is inserted into the heater horizontally. Photo by Christina Nellemann

I did a trial run at a cool mountain location about 6,000 feet in elevation. The outside temperature was about 50 degrees F, and it was about the same inside our trailer. At first, it took a few tries to get the heater lit.

Be sure to push down on the knob, turn and listen for the hissing of the butane before clicking on the lighter. Unlike the Little Buddy which takes some time to heat up, the Cupid lit up and got hot right away and started to warm up the trailer. 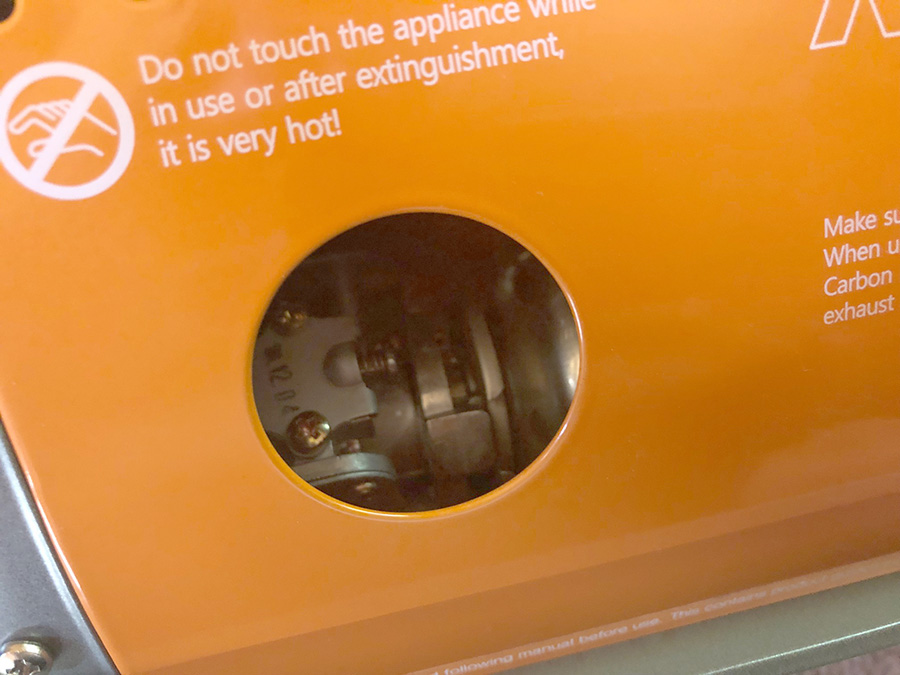 The slit in the canister collar fits on a locking mechanism which can be viewed from the outside. Photo by Christina Nellemann

Within 10 minutes, the trailer was about 15 degrees warmer than the outside temperature. The heater does make a little hissing and bubbling noise, but it’s actually a pleasant sound and lets you know that the heater is on and working.

Unlike the Little Buddy, after about 15 minutes there was no odor, and still no condensation on our trailer windows and the interior was nice and warm. 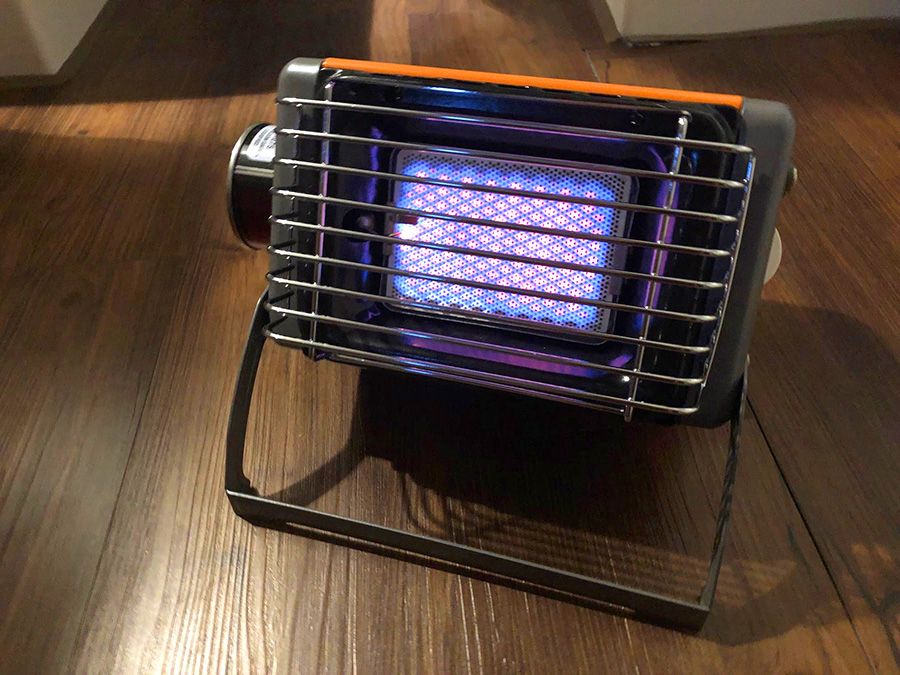 The Cupid warmed up a 13-foot trailer in about 10 minutes. Photo by Christina Nellemann

Even with its metal exterior and low legs, the Cupid didn’t heat up on the outside and didn’t make our floor or the surface it was sitting on hot. Even though the carrying handle can’t be placed upright, it also stayed cool when the heater was in use. The heater can be carefully moved around when in use. 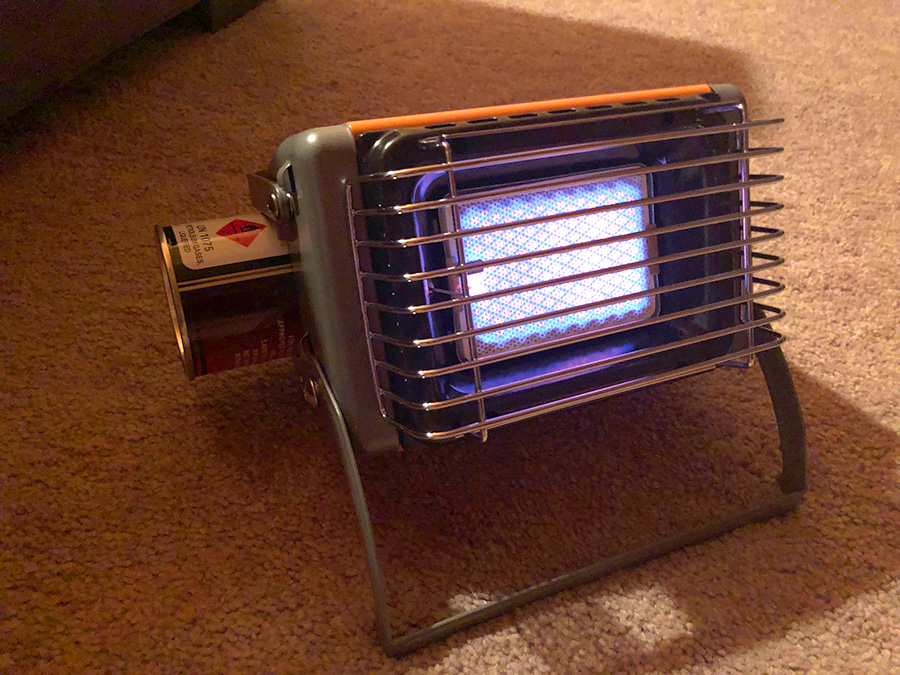 The Cupid is the best-selling and least expensive heater on the Nomadica website, but they have other portable heaters that use different fuel types. The Giga Sun uses propane and emits heat in a 360-degree radius. The tiny Fireball weighs only 1.2 pounds and comes in a small carrying case. It uses isobutane canisters and would be great for backpackers. 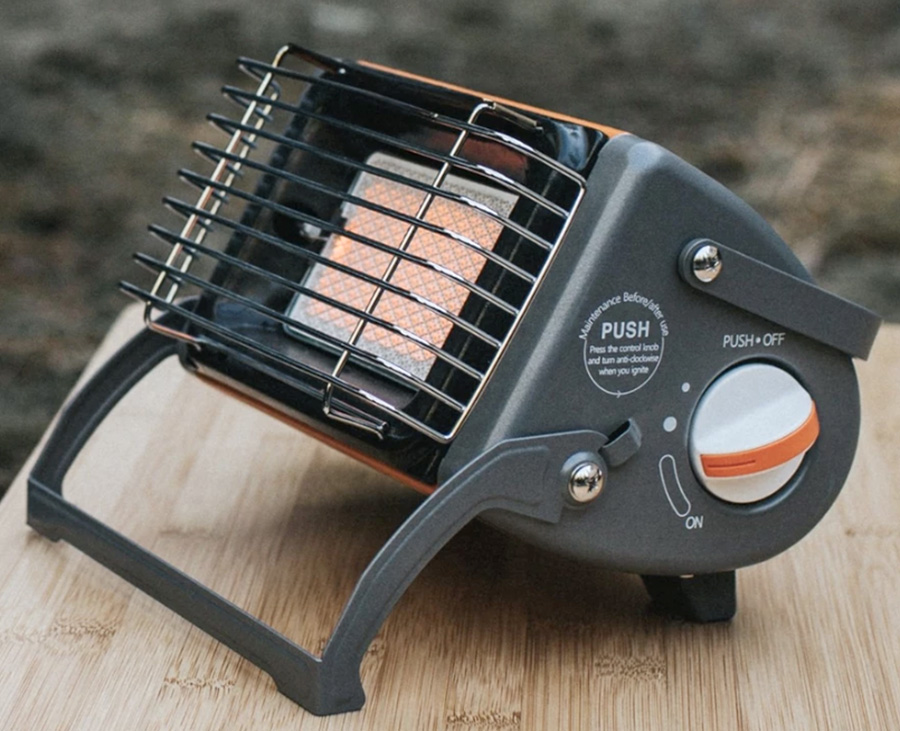 The Cupid has a simple, adjustable on/off switch. Photo by Nomadica

Located in Portland, Oregon, Nomadica sells lightweight, easy-to-use camping gear and other items that can be used with various RVs or while tent camping. Most of the items are intended for remote off-road or overlanding adventures, but they can be used for any type of low-impact camping.

Some of the items from Nomadica include cookware and camping tables, stoves and grills, tent pegs, eco stoves and barbecues, and even adaptors for LPG cans. The Kovea Aluminum LPG Adapter is an attachment that allows you to use a crew top backpacking stove on any 16.4-ounce Coleman propane canister. 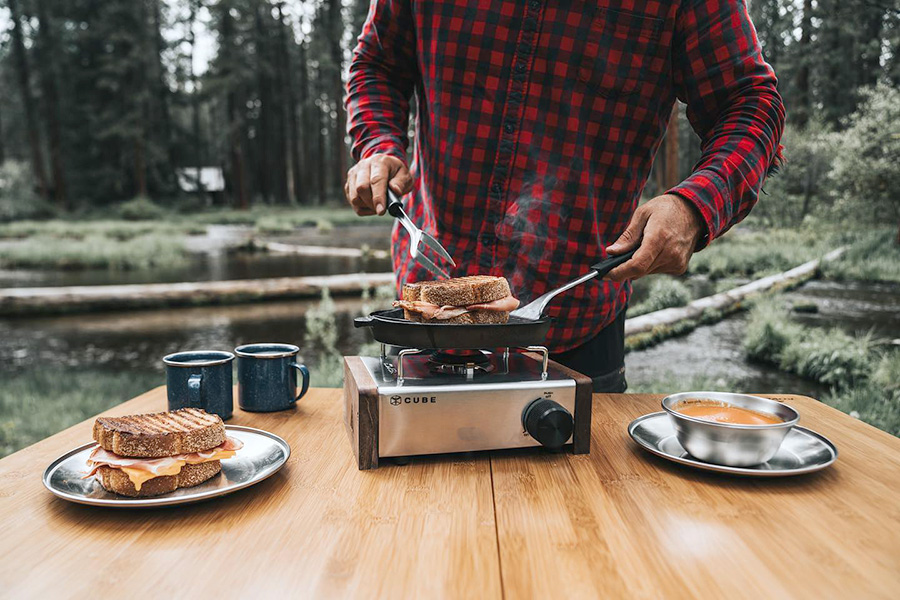 Many of the Nomadica items are from Kovea. This Korean company has been providing camping and outdoor equipment since 1982. Their products include butane-fueled stoves and heaters, headlamps, and even trekking poles and crampons.

Read more: The Dangers Of Using Propane Heaters (And What Precautions You Should Take)