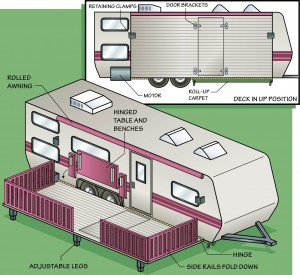 If your the kind of RV’er that stays in one place for a while then chances are you have considered an RV deck. Its possible you considered building one yourself or even looked to purchase one from a company like Sunrise Decks. Unfortunately they don’t offer anything quite like this idea from a Pennsylvania inventor they call the “RV/Trailer Outdoor Living Accessory”.

By looking at this simple drawing I am sure there is someone who has the wherewithal and skill set to make this a reality for their RV. It looks to be fabricate mostly from aluminum which would make the most sense from a durability and weight standpoint. The original concept RV deck would incorporate fold-down furniture, adjustable legs, and collapsible rails. The original design also calls for a battery operated motor to stow and deploy the deck or also a pulley option was considered.

I think about all the hundreds of thousands of RV’ers out there that have decks built from wood or other temporary materials and I think this would be a home run. Its very curious that this hasn’t found its way into the mainstream RV deck business. This RV deck concept, though patented in 2010 has since fallen off the map. I couldn’t locate any information regarding its design or sale after its initial press release. The last communication came from InventHelp. They are company that consults and facilitates the process of patent design and filing. They apparently attempted to submit the invention to companies for review with seemingly lackluster results. For more information, telephone Dept. 07-KIP-455 at (800) 851-6030.

If you want to see a similar design that is installed on a RV be sure to check out our article about the answer to a truly portable RV deck and RV patio.

If you get the bug and decide to do something like this on your own be sure to post a link to your photos in the comments section or in our forums!