Skip to content
Table of Contents show
This retired transit bus was their canvas.
Now that’s a big front window.
After interior shot from midway back looking forward.
A view to the rear from the front of the bus.
The view from the bed looking forward.
Luxury bed at the tail of the bus.
SEE ALSO: This Couple Started With A Rusted Bus Carcass, And 33 Years Later It’s Incredible
Share this post:

Two Israeli women took on a monster of a project when they purchased this dilapidated city transit bus, determined to turn it into a luxury rolling home. After two days of studying, they came up with a plan and dug in, the results were phenomenal to say the least.

This retired transit bus was their canvas. 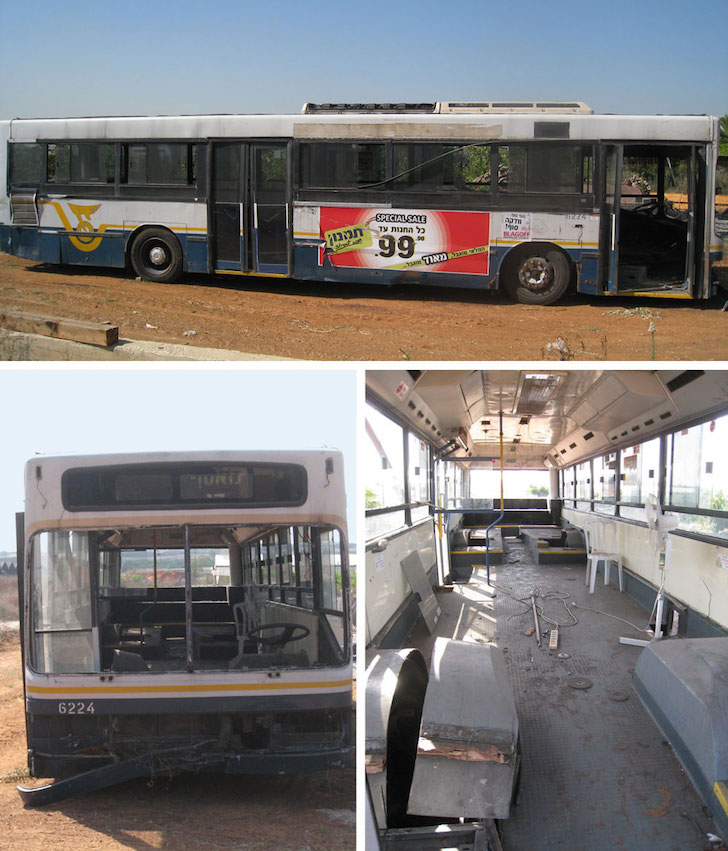 Rather than seek inspiration from traditional RV sources, they went for high style, studying designs from fashion magazines for a look that is both cutting edge and familiar enough to be comfortable. Every surface was first recovered, from floor to ceiling in neutral grays. 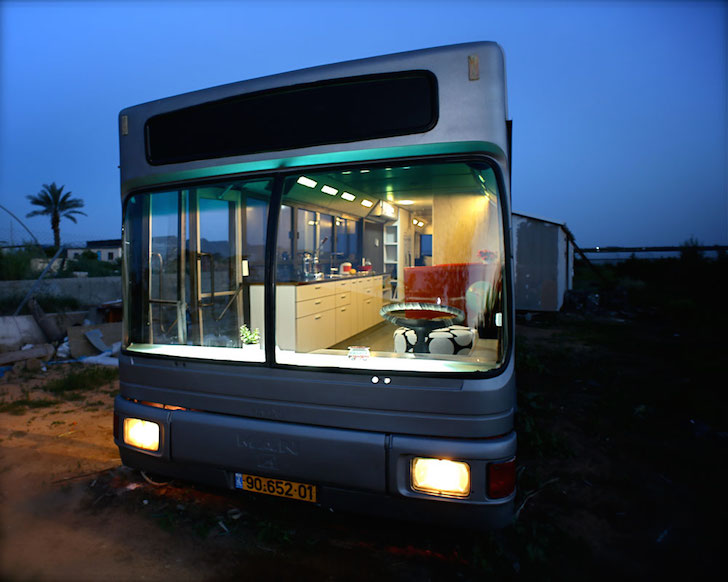 Their design incorporated the buses utilitarian wheel wells into the kitchen cabinets and dining booth to completely camouflage them. They also chose to leave the wide open side windows to allow tons of natural light in, making the space feel much larger.

To fit all of the required elements of closets, bed, bathroom, shower, cooking dining and living spaces, they went to a design firm to help them solidify their layout. Proper space planning is a key factor in successful conversions and this one has it in spades.

After interior shot from midway back looking forward. 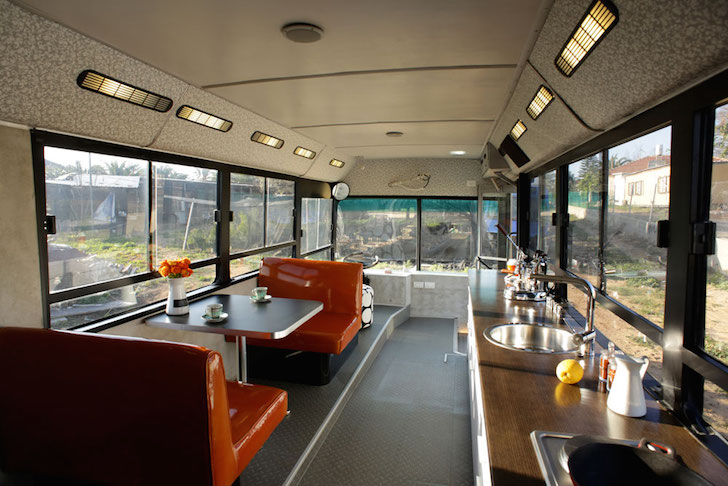 They opted to restore the exterior – rather than disguising the transit bus looks – a choice that we think really paid off. To make the best use of space for storage, a large elevated platform is built into the rear of the bus, with doors in the floor providing access.

A view to the rear from the front of the bus. 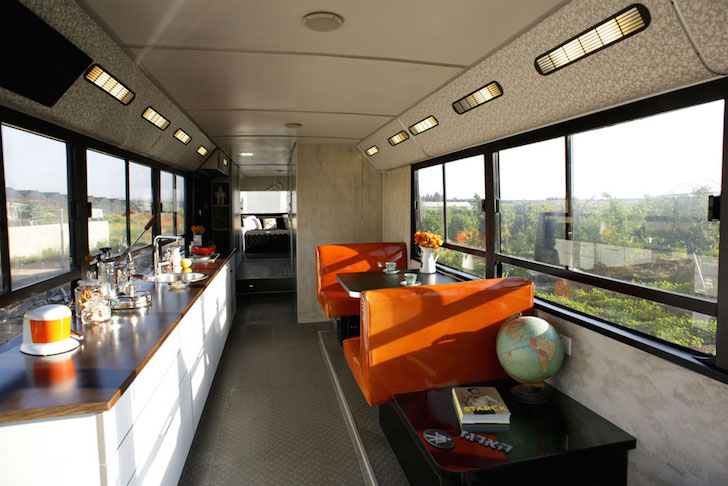 The long, galley style kitchen takes up most of one side of the bus, starting from right behind the entrance door. The large countertop covers tons of under counter storage in nearly full-sized lower cabinets. Rather than install upper cabinets, the windows were left intact, giving the kitchen an open, airy view.

The view from the bed looking forward. 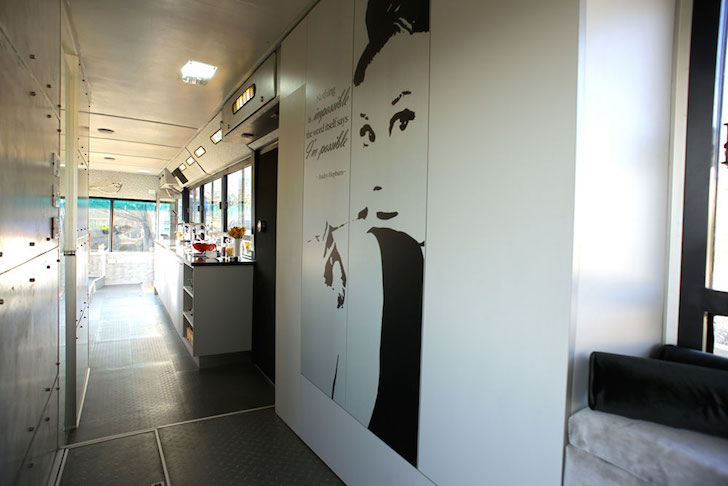 The modern dining booth features bright orange, restaurant-style booth seating directly across from the kitchen, and about midway back in the bus. Behind the kitchen and dining areas, a framed out closet and bath take up one side.

Luxury bed at the tail of the bus. 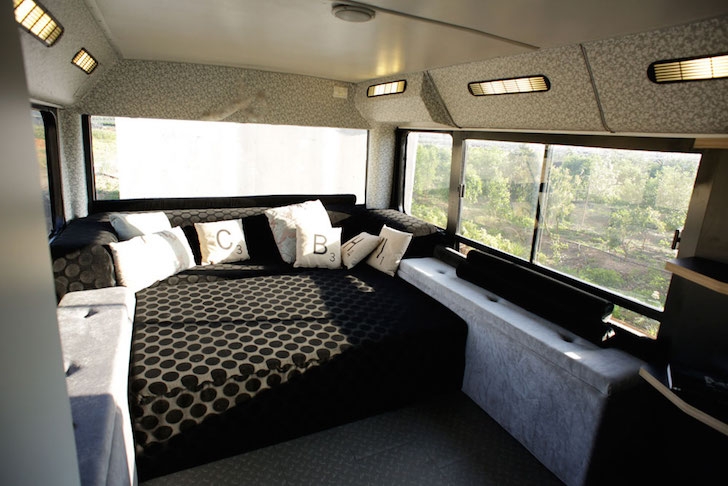 Perched at the tail of the bus, the luxury bed features a built-in bolster running around the windows and creating a nest effect. The bed doubles as sofa and has ample room for two adult sleepers. One feature of this bus that is missing in many conversions is tons of open space, with a wide aisle running the full length of the chassis.