What looks more like a cross between a cargo trailer and a beehive is actually a very lightweight and versatile camping trailer called the Trail Marker.

New York designer JP Ross originally owned a fly rod company and wanted a light, overland camper to get into the backcountry with his family. His design was not only inspired by his rugged Jeep vehicle, but the interior is actually very adaptable and stylish.

The 6×12 foot Trail Marker is built by Rolling Star Manufacturing. The company has been building custom trailers and bed liners since 1996. In addition, they have manufactured trailers for the NAVY, the FBI, and city and county fire departments.

The Trail Marker has a strong axle that can hold up to 3,000 lb. and the exterior is made with honeycomb insulated FRP material that keeps it at around 1,000 lb.

Even though it is lightweight, the trailer can still hold another 1,500 lb. of gear—including a motorcycle or quad. The Trail Marker has a rear ramp door that opens up to allow for easy loading of motorcycles or even furniture for easy moving.

The interior of the trailer is not only functional, but has some beautiful details as well. The queen-sized bed area has a glass ceiling for stargazing and a screened rear door for ventilation.

Two side doors allow for easy access. The bed has a power lift that pulls it toward the ceiling so a second queen bed can be placed underneath for family camping.

The second bed area can also be used for storing additional camping equipment and gear. The cargo ramp makes a handy deck and allows for quick access to the bed. 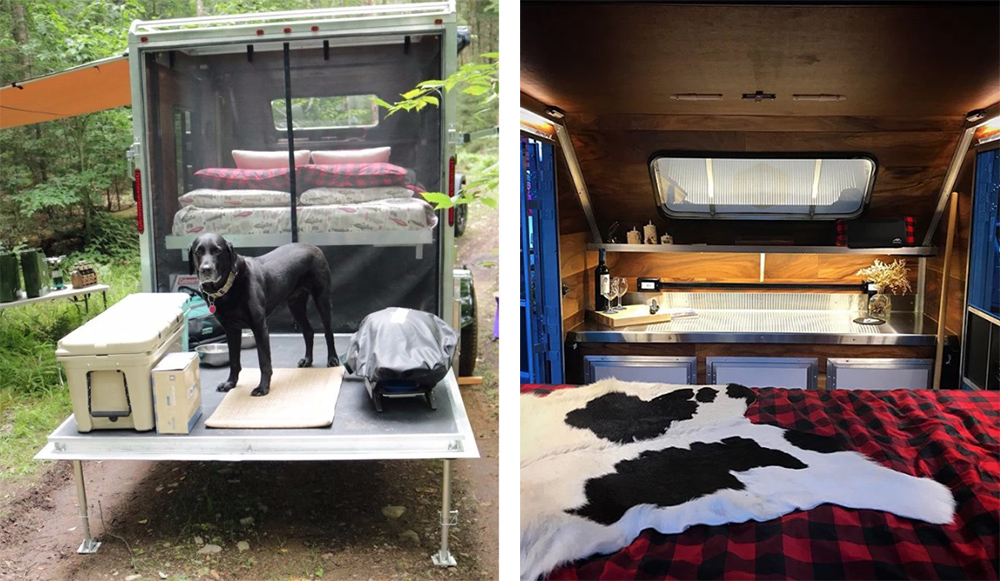 The camper features LED lighting, a 12-volt system, solar power charger, shore power, and a front window with a visor. The interior also has an acacia wood ceiling and a front counter with shelf that can be used for cooking and storage.

Exterior features include two ARB awnings, two ARB tent rooms with floors, and two aluminum side shelves that stow under the bed. The trailer can also be fitted with options like extra jerry cans for fuel, a roll-out kitchen, an axe and shovel mount, and YETI bottle openers.

Currently, each Trail Marker is made to order to exact specifications. The company can even paint the exterior to match your vehicle. The Base model is around $10,000 and the company has three additional models to choose from.

A smaller version of the Trail Marker is currently in the planning stage. The Bushwhacker will be 10 feet long and only 600 lb. It will be made for smaller vehicles and rugged, adventurous camping.

You may also like: Man Turns Cheap Trailer Into 40-Square-Foot Micro Camper For Only $800

2 thoughts on “Jeep-Inspired, Off-Road Trailer Can Haul A Motorcycle”